Aortic aneurysm: Classification | Imaging Appearance | CT Evaluation Point. Aortic aneurysm refers to the local or diffuse pathological expansion of the aorta, involving the entire thickness of the aortic wall, with a diameter exceeding 1.5 times the normal aortic diameter or more, while the wall of a pseudoaneurysm has only the adventitia layer.

Aortic aneurysm refers to the local or diffuse pathological expansion of the aorta, involving the entire thickness of the aortic wall, with a diameter exceeding 1.5 times the normal aortic diameter or more, while the wall of a pseudoaneurysm has only the adventitia layer. It is of clinical significance to distinguish these two types of aneurysms, because pseudoaneurysms are formed by rupture of the arterial wall and are unstable.

The occurrence of aneurysms is multifactorial, including genetic susceptibility and environmental factors, and their combined effect is to cause degeneration of the arterial wall. The most common cause of aneurysms is atherosclerosis, which is also seen in trauma, infection (including tuberculosis and syphilis) or genetic syndromes, such as Marfan syndrome, Ellaire-Danlos syndrome, the latter usually involving the aortic root , Ascending aorta and aortic arch.

Up to 95% of atherosclerotic aneurysms involve the abdominal aorta instead of the thoracic aorta. The natural course of an aneurysm is progressive wall remodeling, dilation, and eventual rupture. The main complications of the patient are coronary heart disease, peripheral vascular disease, obstructive lung disease, diabetes and renal failure.

Asymptomatic thoracic aortic aneurysm (TAA) is often found on chest X-ray examination for other reasons. It is often manifested as mediastinal widening or calcified soft tissue masses in the mediastinum, which is often easily confused with tumors (Figure). Similarly, abdominal aortic aneurysms can occasionally be found on plain radiographs of the abdomen or lumbar spine, manifesting as masses and calcification of the tumor wall (Figure). 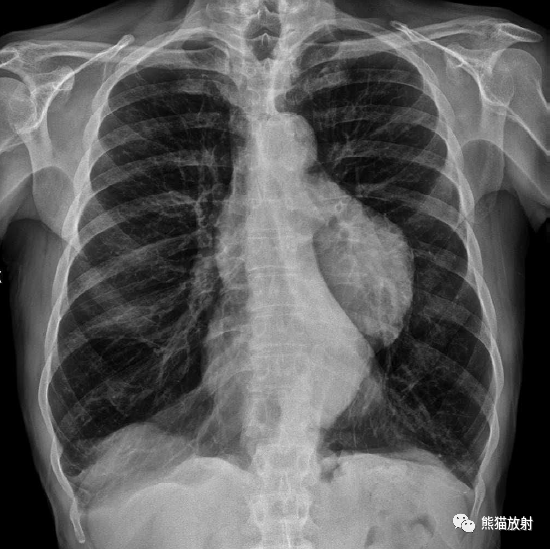 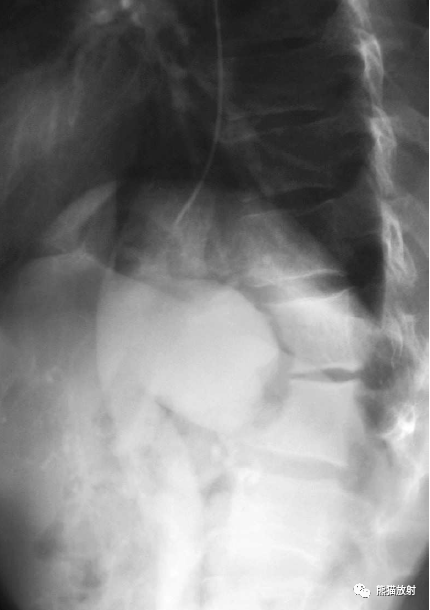 In patients with severe middle back pain, the anterior edge of the lower thoracic vertebrae was eroded, and the lateral aortic angiography showed that the vertebral body was changed to a pulsating thoracic aortic aneurysm.

CT and MRI can display the structure of the thoracic aorta without restriction, the accuracy and repeatability of the measurement are very good, and it can be used for the diagnosis and follow-up of thoracic aortic aneurysm. CT MPR and 3D VR can assess the diameter, length, angle, calcification, and mural thrombus of aneurysms, and can also measure the length, shape and angle of the neck of the aneurysm (Figure). 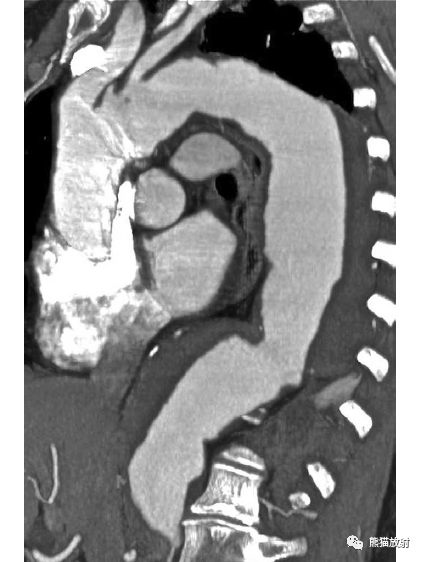 Descending aortic aneurysm, MDCT MPR sagittal image. The aneurysm did not extend to the left subclavian artery, and the proximal aneurysm neck was not excessively angled.

CT multiplanar reconstruction can more accurately show the size and extent of aneurysms, the relationship with visceral and iliac vessels, the vascular cavity, vessel wall, and the extent of inflammatory infiltration, as well as the location and expansion of important adjacent structures. Because of this, CT is often used for AAA endovascular treatment or evaluation before surgery (Figure). 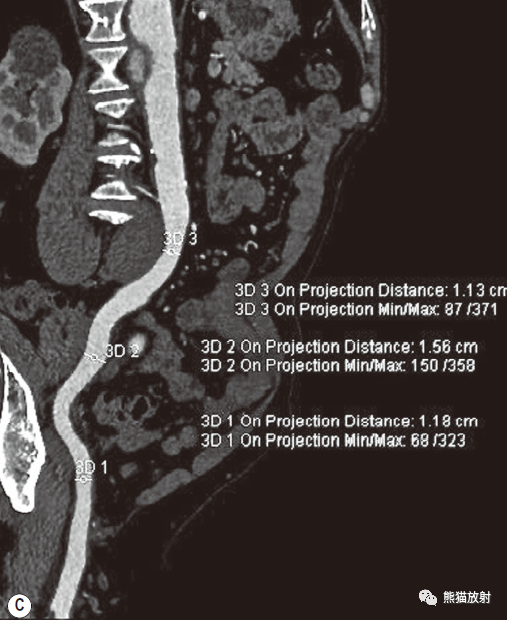 Measure the proximal tumor neck (A) and distal tumor neck (B) under the renal artery to select the appropriate implant. The curved surface reconstruction shows the overall view of the aneurysm, even the most complex structure, and can measure the length of the stent to cover and the vascular access. Such reconstruction and measurement are essential for the successful treatment of abdominal aortic aneurysms with stent grafts

The anteroposterior and lateral diameters of the abdominal aortic aneurysm.

The diameter of the aorta at or slightly below the level of the visceral branches.

The distance from the proximal aneurysm neck to the lowest renal artery (at least 15mm).

The shape of the tumor neck (a conical tumor neck can cause poor proximal occlusion or delayed endoleak) and whether there is severe atherosclerosis that may cause poor sealing.

If the anteroposterior and lateral angles of the tumor neck are greater than or equal to 60°, the stent blocking effect will decrease and the potential risk of stent displacement will increase.

If the accessory renal artery must be covered, the function of the single kidney on both sides must be evaluated before surgery.

Measure the distance from the lowest renal artery to the aortic bifurcation to determine the length of the stent graft body.

Assess the size and stenosis of the femoral artery and external iliac artery, which may hinder the delivery of the stent graft.

Evaluate for any accidental findings, especially regarding the size and function of the kidneys or the presence of double inferior vena cava, especially if open surgery is planned.

Inflammatory abdominal aortic aneurysms (IAAAs) refer to the thickening of the dilated aortic aneurysm wall, obvious fibrosis around the aneurysm and retroperitoneum, and dense adhesion with adjacent organs of the abdomen.

CT has become the main examination method for evaluating inflammatory abdominal aortic aneurysms. It can show thickened and strengthened soft tissues around the aorta (Figure).

IAAAs must often be differentiated from diseases such as lymphomas around aneurysms, tumor reactions of liposarcoma, or inflammatory fibrous reactions around the aorta caused by bladder cancer. In addition, bleeding also needs to be identified. When an aneurysm ruptures, the border of the soft tissue behind the peritoneum is unclear, and it is difficult to distinguish it from surrounding inflammation. However, the CT value of fresh hemorrhage is higher than that of muscle, except at the point of rupture, it usually extends into the pararenal fat, away from the aneurysm.

Fungal infection can cause nourishing blood vessel thrombus, leading to destruction of the aortic intima and media. Generally speaking, the emboli of this kind of infection comes from infective endocarditis, sepsis or local spread (figure). The imaging findings of fungal aneurysms are similar to other aneurysms. 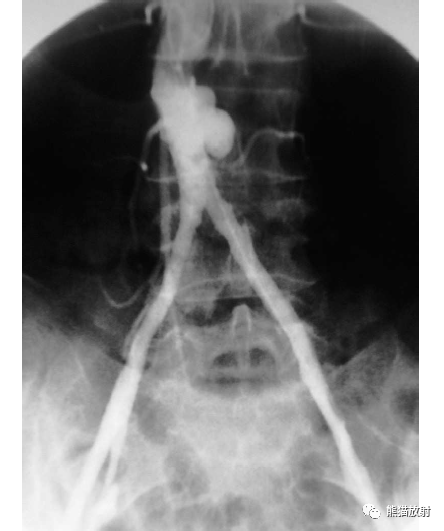 Fungal aneurysm. Aortic angiography showed an eccentric aneurysm in the lower part of the abdominal aorta, which was confirmed to be a secondary fungal infection after Salmonella infection.

Aortic sinus aneurysms can be congenital, especially in Asia, or secondary to infective endocarditis and Marfan syndrome, and ankylosing spondylitis. The prevalent site is the right aortic sinus, which extends to the right ventricle or right atrium, and can also occur in the acoronary sinus, which extends to the left atrium. Both MRI and CTA can better show the aortic root and ascending aorta. 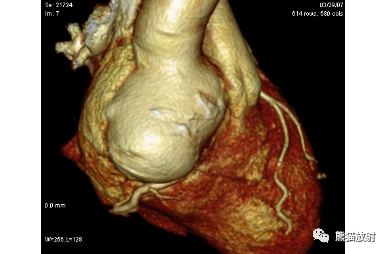 When there is no obvious rupture of the aorta, various indirect signs can indicate that the aorta is about to rupture, such as bloody pleural effusion, around the aorta, pericardium and (or) mediastinal hematoma. Hematoma around the aorta appears as a mass surrounding the aorta. If the density of pleural or pericardial effusion is increased during CT scan (20~40HU), it is suspected to be bloody effusion. The appearance of pleural effusion and the gradual increase in the diameter of the aorta also indicate the progression of the disease (Figure). 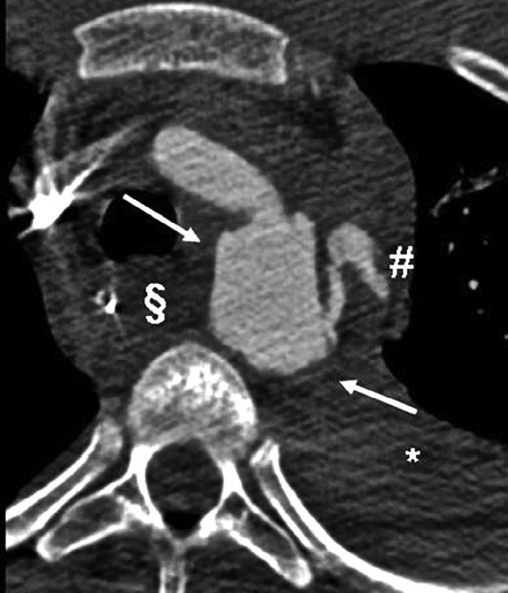 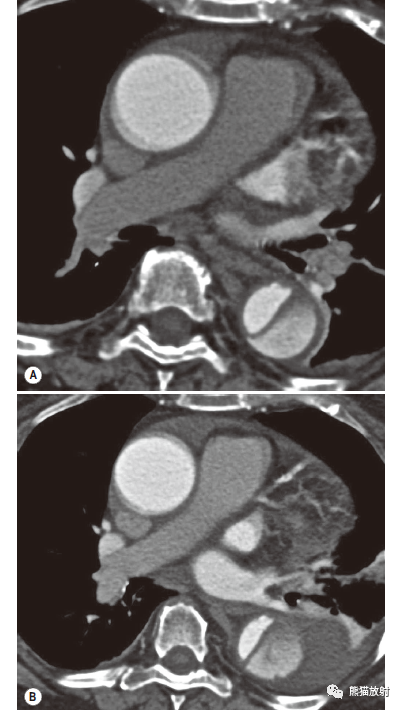 Acute type B aortic dissection, 1d (A) and 4d (B) after the onset of clinical symptoms. After 4 days, pleural effusion and peri-aortic effusion increased significantly. The patient underwent emergency endovascular repair.