How to deal with cerebral aneurysm rupture?

What happens when a cerebral aneurysm ruptures? An aneurysm is a balloon-like bulge in the wall of an artery. As the aneurysm grows, it puts pressure on nearby structures and may eventually rupture. A ruptured aneurysm releases blood into the subarachnoid space around the brain. Subarachnoid hemorrhage (SAH) is a life-threatening stroke. The focus of treatment is to stop bleeding and repair aneurysms through clipping, coiling or bypass.

What is a ruptured aneurysm?

An aneurysm is a balloon-like bulge or weakening of an artery wall. (Similar to the balloon on the side of a garden hose.) As the bulge grows, it becomes thinner and weaker. It will become so thin that the blood pressure inside will cause it to leak or rupture. Aneurysms usually occur in larger blood vessels at the bifurcation of the artery. Types of aneurysms include (Figure 1): 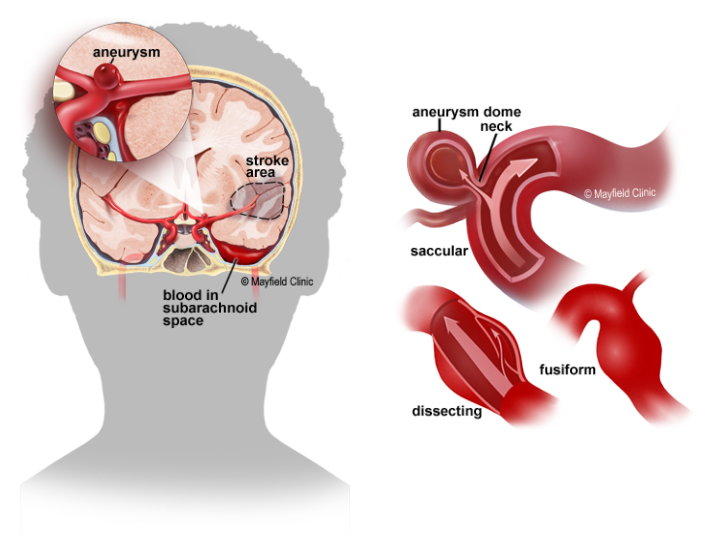 Figure 1: A ruptured aneurysm releases blood into the subarachnoid space around the brain, causing a stroke (left). Different types of aneurysms (right). (What happens when a cerebral aneurysm ruptures?)

When an aneurysm ruptures, it releases blood into the space between the brain and skull. This space is filled with cerebrospinal fluid that soaks and buffers the brain. As the blood spreads and clots, it stimulates the lining of the brain and damages brain cells. At the same time, the areas of the brain that previously received oxygen-rich blood from the affected arteries are now deprived of blood, leading to strokes. Subarachnoid hemorrhage (SAH) is life-threatening, with a 40% risk of death.

The clotted blood and fluid collect in the hard skull and increase the pressure, which may squeeze the brain or cause the brain to shift and herniate. The obstruction of normal cerebrospinal fluid circulation can enlarge the ventricles (hydrocephalus), leading to confusion, lethargy, and loss of consciousness.

The complication that occurs 5 to 10 days after the aneurysm ruptures is vasospasm (Figure 2). Stimulating blood byproducts can cause spasms and narrowing of the arterial walls, reduce blood flow to this area of ​​the brain, and cause secondary strokes. 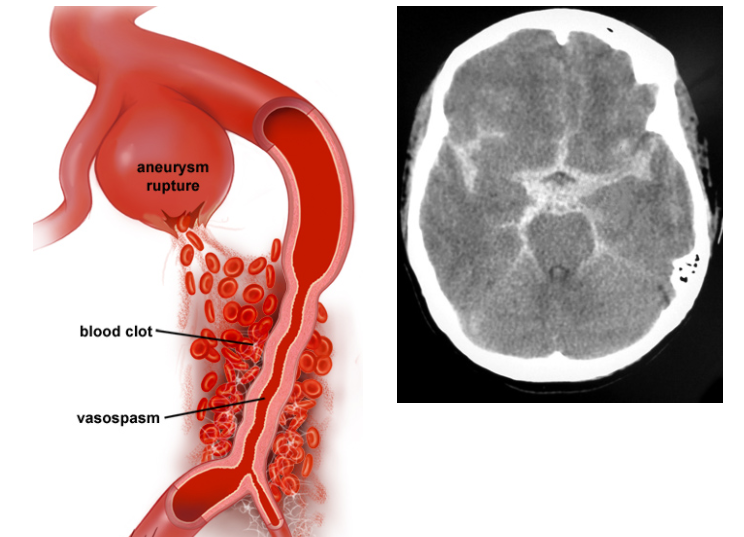 Figure 2: (Left) When red blood cells are broken down, toxins cause the walls of nearby arteries to spasm and narrow. The greater the SAH, the higher the risk of vasospasm. image 3. (Right) CT scan shows a ruptured aneurysm causing subarachnoid hemorrhage (white star). (What happens when a cerebral aneurysm ruptures?)

What are the symptoms of ruptured cerebral hemangioma?

Most aneurysms do not show symptoms until they rupture. Ruptures usually occur when a person is active rather than sleeping.

What are the treatments for ruptured cerebral hemangioma?

Treatment may include life-saving measures, symptom relief, hemorrhage aneurysm repair, and prevention of complications. Within 10 to 14 days after the aneurysm ruptures, the patient will remain in the Neuroscience Intensive Care Unit (NSICU), where doctors and nurses can closely observe signs of rebleeding, vasospasm, hydrocephalus, and other potential complications.

Pain medications will be used to relieve headaches, and anticonvulsants may be used to prevent or treat seizures.

Determining the best treatment for a ruptured aneurysm involves many factors, such as the size and location of the aneurysm and the stability of the patient’s current condition.