Human becomes “transgenic” after receiving mRNA vaccine? Recently, a rumor records about the safety of the COVID-19 vaccine have been widely spread. Its core proposition is that the mRNA COVID-19 vaccine will integrate and change human DNA through reverse transcription. Vaccination of this type of vaccine will become a genetically modified person.

mRNA is Messenger RNA (messenger ribonucleic acid). In order to trigger the immune response, many vaccines inject inactivated or weakened whole viruses into the human body, and the new coronavirus vaccine made by relying on mRNA technology is sent into the human body with a piece of artificially encoded virus genetic information. Human cells receive this genetic information, translate and produce spike proteins, which are also on the surface of the new coronavirus. After the immune system discovers the spike protein that does not belong to the human body, it initiates an immune response. “This process is the same as fighting the COVID-19 pneumonia infection. After the real COVID-19 virus enters the body, the trained immune system will respond quickly and fight it.” The US Centers for Disease Control and Prevention (CDC) said in a statement. 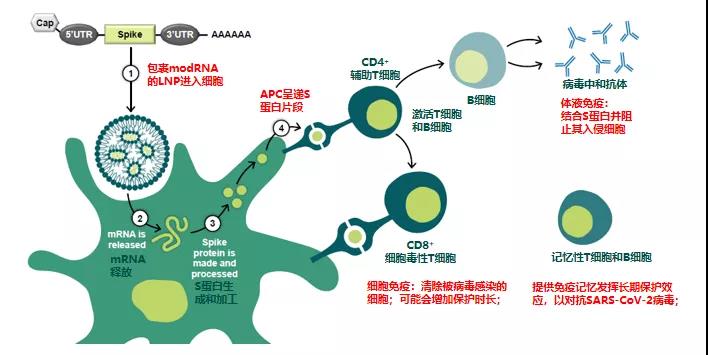 “Genetic information” “generates protein”, and the difficult scientific principles have become the “original sin” of the mRNA COVID-19 vaccine. The group chat record mentioned in the opening paragraph also stated: “The vaccination is a life-threatening life for human beings and is equivalent to committing a crime against humanity.”

“This research has no practical significance”

In the aforementioned chat log, the speaker gave a link to what he said “latest scientific journal article”. This is a “question mark” essay entitled “Coronavirus may sometimes infiltrate human chromosomes with genetic material, but what does this mean? 》

According to the article, the bioRxiv preprint platform released the study of “Reverse Transcription of Novel Coronavirus RNA and Integration into the Human Genome” on December 12, local time in the United States. The research was jointly completed by the Whitehead Institute of Biomedical Research, Massachusetts Institute of Technology, and the John Paulson School of Engineering and Applied Science at Harvard University. As of the publication of this article, the research has not been peer reviewed.

Regarding this result, David Baltimore, a virologist at the California Institute of Technology who won the Nobel Prize in Physiology or Medicine for his discovery of reverse transcriptase, described it as “unexpected” and “asked many interesting questions.” But together with David Baltimore, “Science” interviewed many top experts in the field of virology and pointed out that the above-mentioned research itself has no major flaws, nor does it have practical significance.

And reverse transcription is RNA guidance and DNA synthesis. HIV (HIV) is terrible because it is a retrovirus. After entering the host target cell, HIV will use the viral RNA as a template to reverse transcribe into DNA under the action of reverse transcriptase, and enter the nucleus through integrase, where the host cell DNA template transcribes RNA and guides the synthesis of protein. Eventually, HIV can take over the functions of infected human cells, causing them to produce and release many new copies of HIV to invade other human cells.

With reference to HIV, in order to reverse transcribe DNA and integrate it into the human genome, two conditions must be met: 1. It has reverse transcriptase and integrase, and 2. It enters the nucleus. But the mRNA COVID-19 nucleic acid vaccine is not in compliance. First of all, its essence is a small piece of genetic information that does not contain the above two enzymes and cannot be reverse transcribed or integrated. After being injected into the human body, the genetic information carried by the mRNA can be translated in the cytoplasm to express the antigenic protein without entering the nucleus. Therefore, there is no chance for the mRNA and human DNA to meet.

Secondly, even if there is a LINE-1 retrotransposon in the normal human body, it is not activated and cannot promote mRNA reverse transcription.

Finally, the chemical nature of mRNA itself is very unstable, and its half-life in human cells is about half an hour. Ulrich Protzer, director of the Institute of Virology at the Technical University of Munich, told the BBC that it is quickly degraded after entering the cell, which can improve its safety. Some analysts also pointed out that there are a large number of human mRNAs in human cells, and vaccine mRNA must have a reverse transcription site in order to be “caught” by reverse transcriptase. But when the mRNA new coronavirus nucleic acid vaccine was developed, this “target” was not left.

In response to the above-mentioned pre-print study, Melanie Ott of the Gladstone Institute of Virology and Immunology in San Francisco, California, USA, told Science that this is an in vitro biological experiment implemented in a cell line, depicting an abnormal biological phenomenon. “In the in vitro system in the laboratory, genes can be manipulated through molecular biology to achieve many abnormal biological phenomena.”

On the bioRxiv preprint platform, dozens of readers left comments and applied for the platform to “retract the manuscript.” The reasons include: “The content is speculation, and the title becomes an affirmative sentence, which does not match” “The evidence does not support the conclusion” “There is no real COVID-19 The site where the virus inserts into the human genome “the evidence of LINE-1 retrotransposon is weak” “activates reverse transcription under harsh artificial culture conditions.”

“This is lower than the odds of a trillion prizes.” Some Chinese scholars commented.

Not a new allegation

In fact, these kinds of accusations that are close to rumors are not “news.” As early as May 2020, a video circulated on social media saying that mRNA technology “has never been tested or approved”, or that it will change human DNA.

In the topic of “New coronavirus Vaccine”, the US CDC refuted this argument: “mRNA new coronavirus nucleic acid vaccine is a new technology in the field of vaccines, but it is not an unknown new thing.” CDC pointed out that mRNA vaccine research has a 30-year history. Previously, there have been studies related to mRNA vaccines for influenza, Zika virus, rabies and cytomegalovirus (CMV). At the same time, cancer research also uses mRNA technology to trigger the immune system against specific cancer cells.

According to the US CDC, in the future, mRNA vaccine technology may allow one vaccine to provide protection for multiple diseases, thereby reducing the number of injections. This is precisely the advantage of mRNA technology. Different from other traditional vaccine research and development routes, mRNA technology can encode genetic information as long as the virus gene sequence is obtained, without the need for virus strain isolation and culture procedures, and no need for cumbersome antigen protein expression.

In December 2020, a variant of the COVID-19 virus VUI-202012/01 (or B.1.1.7) broke out in the UK, which may increase its spread by 70%. “Once a major mutation in the virus is monitored, a new mRNA vaccine for the new coronavirus will be provided within 6 weeks.” Dr. Ug Sain, co-founder of the German biotech company BioNTech (BioNTech) Ugur Sahin) said.

Reuters quoted Mark Lynas, a visiting researcher at Cornell University’s Science Alliance, to refute the rumors that “there is no mRNA vaccine that can change human DNA.” “Activists against the COVID-19 vaccination often deliberately spread these rumors to create confusion and mistrust.” Mark Lynas said.

Vaccination: the light at the end of the tunnel

The Director-General of the World Health Organization (WHO) Tan Desai said recently that the development of the nCOVID-19 pneumonia vaccine has made people begin to see the “light at the end of the tunnel.” This argument is supported by multiple studies. “Cell” magazine published an article in support of the “end of vaccine theory”, believing that vaccination can effectively and quickly slow down the spread of the new coronavirus and eventually end the pandemic.

As of the publication of this article, a number of COVID-19 vaccines have been approved worldwide. Among them, the mRNA new coronavirus nucleic acid vaccine BNT162b2 developed by BioNTech has obtained the “Emergency Use Authorization” (EUA) in the United Kingdom and the United States and the EU’s conditional marketing license. As of December 29, 2020, more than 2 million people have been vaccinated nationwide. The BBC quoted Anthony Fauci, director of the National Institute of Allergy and Infectious Diseases, as saying that through vaccination to obtain sufficient herd immunity, the United States may return to normal by the fall of 2021.

The mRNA new coronavirus nucleic acid vaccine BNT162b2 is called “Fosun New Corona vaccine” in China. According to previous media reports, as of December 19, Fosun Pharma has promoted the development and commercialization of the vaccine in China. Currently, the candidate vaccine BNT162b2 is undergoing phase II clinical trials in Taizhou and Lianshui, Jiangsu, China, and the recruitment of subjects Completed ahead of schedule, a total of 960 people were enrolled, and no serious adverse event reports have been received. It is reported that Fosun Pharma has previously announced an agreement with BioNTech. Once the mRNA COVID-19 vaccine is approved for marketing in the mainland China market, BioNTech is expected to supply at least 100 million doses of related vaccines to the mainland China market in 2021 to respond to the COVID-19 epidemic.