The fat eaten will slowly “feed” the cancer cells!

The fat eaten will slowly “feed” the cancer cells! Obesity not only makes you look greasy and ugly, but also easily induces diseases such as diabetes, high blood pressure, and even cancer. In response to this phenomenon, what I want to say is: Let’s not laugh half-heartedly! Because you may be a fat man yourself!

Obesity not only makes you look greasy and ugly, but also easily induces diseases such as diabetes, high blood pressure, and even cancer. Regarding obesity and carcinogenesis, many scientific studies have now confirmed that colorectal cancer, breast cancer, and pancreatic cancer are all closely related to obesity.

In order to explore how obesity affects tumor development, the researchers divided the mice into two groups. The first group was an experimental group, fed with high-fat food; the second group was a control group, with a normal diet. 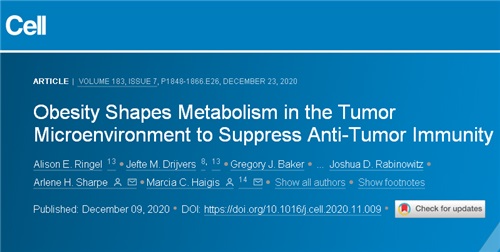 After analyzing the tumor microenvironment, the researchers found that under a high-fat diet, the whole body fat of the mice will increase. At this time, the cancer cells will be very “intelligent” to readjust their metabolic function, so as to “rob” more fat for their own use. Accelerate the growth of tumors.

Specifically, cancer cells reduce the expression of PHD3 protein (a protein that prevents excessive fat metabolism in normal cells), so that CD8+ T cells (an immune cell that can kill cancer cells) in the tumor microenvironment cannot be obtained. Nutrition makes immune cells have to “endure starvation”, which eventually slows down the speed of division, resulting in a decrease in number and weakening the ability to fight tumors.

And if you increase the expression of PHD3 protein, you can reverse this situation, increase the activity of immune cells, and slow down the growth of tumor cells.

In general, in the battle between tumor cells and immune cells, who wins and who loses may change with the degree of body obesity. Therefore, in order to reduce the winning rate of tumor cells, we had better not eat too fat!

Predicting the risk of colorectal cancer

Obesity increases the risk of cancer, one of which is colorectal cancer. The data shows that colorectal cancer ranks third in the ranking of malignant tumor incidence, with 429,000 new incidences and 281,000 deaths each year. In a study involving 100,000 people published in BMC Medicine, researchers assessed their risk of colorectal cancer by measuring the body fat of men and women.

Don’t lose weight in winter, but sad in summer! If you want to get rid of the greasy feeling on your body and reduce the risk of cancer, weight loss is king! If you want to lose weight, two measures are inevitable, one is to keep your mouth shut, and the other is to open your legs!

It’s not to let you go on a diet, but to keep you healthy.

A study by Stanford University in the United States showed that weight loss has nothing to do with genes and joint-free eating. The key is to maintain a healthy diet, eat less processed foods, avoid high-fat and high-sugar foods, eat more fresh fruits and vegetables, and maintain a balanced diet .

Simple and safe aerobic exercise is an effective way to lose weight. For people who sit still and do not exercise, aerobic exercise for 30-60 minutes each time can achieve an efficient fat burning effect.

But it should be noted that the exercise process must be constant and uninterrupted, otherwise the weight loss effect will be greatly reduced. A foreign study showed that compared with 5 times a week, 30 minutes of intermittent moderate-intensity aerobic exercises, 3 times a week, 30-minutes of continuous medium-intensity aerobic exercises had better weight loss effects.