Aspirin: A 40-year-old mistake, FDA and Lancet have expressed their opinions! Many medical studies have failed to prove that aspirin can provide safe and effective protection to prevent cardiovascular disease. At the same time, it may cause serious medical problems, such as intestinal and intracranial hemorrhage, ulcers, kidney failure, blindness, etc.

If you ask a doctor to help prevent cardiovascular and cerebrovascular diseases, he usually prescribes some aspirin. But now, this situation is about to change.

For a long time, taking a small amount of aspirin daily (LDA therapy) has been regarded as an effective way to prevent another heart attack, stroke or other cardiovascular diseases.

But at the European Society of Cardiology (ESC) held on August 25 this year, clinical research reports from Harvard University and Oxford University both showed that for people who have not yet developed cardiovascular disease, aspirin The preventive effect is not enough to offset its side effects.

Experiments also proved that fish oil supplements have little effect in this regard. The head of the Oxford University research team, Louise Bowman, said: “We are pretty sure that there is no role of fish oil supplements in the prevention of cardiovascular disease.” Compared with the control group taking placebo, the control group taking fish oil It’s not healthier—both groups had a 9% heart attack rate. The research was published in the New England Journal of Medicine.

Another experiment hosted by Harvard University covered 12,546 volunteers. During the 12-year follow-up, compared with the control group taking placebo, taking aspirin only caused serious adverse events such as myocardial infarction, stroke, and death from cardiovascular causes. The probability of occurrence has dropped by 4%, which is an ugly number. The results of the study were published in the medical journal The Lancet. 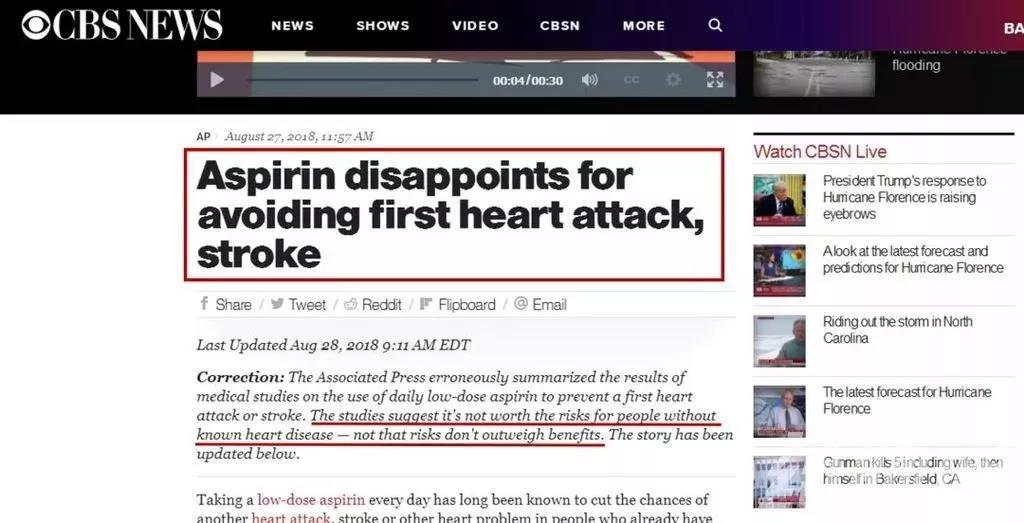 ▲Two research results have been reported by major foreign media

The results of these two studies were widely endorsed by other researchers at the annual meeting of the European Heart Association. As the “magic medicine” for preventing cardiovascular and cerebrovascular diseases, aspirin has already stepped down from the altar.

For decades, the US FDA (Food and Drug Administration) has been promoting the use of aspirin. Now, even the FDA has changed its attitude towards aspirin.

According to the FDA, for people who have never suffered from cardiovascular disease, the early preventive effect of daily aspirin is not obvious, but it will bring the side effects of brain or stomach bleeding. If you do not have heart problems, you should not take aspirin every day-even if your family has a history of heart disease.

In order to facilitate industry personnel to find relevant industry research reports, we will share more than 3,000 topics and tens of thousands of in-depth research reports on Knowledge Planet in the 2018-2020 three years. Welcome to scan the star code at the end of the text
At the same time, the FDA also issued a statement on its official website:
“We concluded that these data do not support the use of aspirin as a preventive drug by people who have not experienced a heart attack, stroke, or have no cardiovascular disease. This use is generally called’primary prevention’. For these people, aspirin The effect is not clear, but the risks it causes, such as dangerous brain or stomach bleeding, still exist.”

This statement is directed to Bayer Pharmaceuticals. Bayer asked the FDA to change the labeling information for aspirin to show consumers that it can help healthy individuals prevent heart attacks. Aspirin is one of the company’s most profitable drugs, and it generated $1.27 billion in sales for Bayer last year alone. Judging from the request made by Bayer, its real intention seems to be for everyone to take the drugs they produce. Now, the FDA has rejected this request.

The FDA is a benchmark for the medical profession in many countries around the world to judge drugs. This statement will shake the inherent knowledge of aspirin by most doctors.

For the prevention of cardiovascular and cerebrovascular diseases, the risks of taking aspirin far outweigh the benefits

In the 1970s, people discovered that aspirin can prevent platelet aggregation, so it was immediately given the sacred mission of preventing cardiovascular and cerebrovascular diseases. This effect has been questioned in the last 10 years, because although it has been used for more than 40 years, its effect is still not so obvious.

In fact, the evidence supporting the use of aspirin as a cardio-cerebrovascular preventive drug was very weak from the beginning. Now, they have become less and less convincing.

Multinational research reports show that the use of aspirin to prevent cardiovascular and cerebrovascular diseases is a mistake. The list in the table below is just a few of the numerous opposition reports.

As the medical community has conducted more and more studies on aspirin, it seems that its side effects have become more and more serious. Among them, the most fatal danger is gastrointestinal bleeding and cerebral hemorrhage.

1. Main side effects: increase the risk of bleeding in the body

Aspirin interferes with platelets (blood cells that promote blood clotting), which increases the risk of gastrointestinal and cerebral hemorrhage, especially for the elderly. Studies have found that if the elderly use aspirin as a preventive method for a long time, once they encounter an accident that may cause cerebral hemorrhage, their mortality rate will be higher.

2. Main side effects: destruction of the inner wall of the gastrointestinal tract

The weak effect of aspirin in the experiment is not worth mentioning compared with the risks it brings, especially when there are safer alternatives.

Lancet: Aspirin has to be eaten as fat or thin

If there is only one magic drug in the world, then its name must be-aspirin.

It was first used for antipyretic and analgesic, and later it was found to reduce the risk of myocardial infarction and prevent coronary heart disease and stroke. In recent years, it has also been proved that it can prevent the occurrence of colorectal cancer.

It is the world’s highest-selling drug, and the consumption of acetylsalicylic acid alone reaches 30 billion tablets each year. This number is astronomical even for a best-selling drug.

And just this month, a paper published in The Lancet “The Lancet” may change the habit of using aspirin.

Although aspirin is a “magic drug”, it has obvious side effects.

Therefore, in the treatment of aspirin, it is particularly important to control the dose. If the dose is too large, the incidence of adverse reactions will increase significantly; while the dose is too small, it will not have sufficient preventive effect. At present, the most commonly used therapeutic dose is 75-100mg/day. This dose is also gradually explored by generations of doctors and patients during treatment, and written into major guidelines for widespread promotion.

But Professor Peter Rothwell from the University of Pennsylvania has a different view.

He believes that it is very unreasonable for everyone to use the same dose for treatment. Because everyone’s weight is different, and the independent factor of weight has a lot to do with the distribution and removal of drugs. Patients of different weights taking the same drug will inevitably cause different blood drug concentrations, which will affect the therapeutic effect.

But just having hypotheses is not enough, the key is how to pass clinical data verification.

He conducted a meta-analysis study, which included 13 large clinical trial studies on aspirin treatment, in which a total of 116,000 patients taking aspirin were included.

It should be noted that these trials are comparisons between the treatment group (aspirin) and the control group. The key to Roswell’s meta-study is to obtain the key personal information (weight) of all the patients, and use it to conduct a single risk factor treatment effect study.

The final result was even more significant than he expected.

02 What the research found

Roswell and his team found:

The cardiovascular protective effect of low-dose aspirin (<100mg/day) is meaningful only when the patient’s body weight is light (<70kg).

The same weight cutoff also exists in other preventive treatments. To prevent the recurrence of colorectal cancer, when taking aspirin, patients above 80kg and 80kg require completely different doses. For severe hemorrhage caused by aspirin, the threshold is 90kg (with low-dose aspirin, the chance of severe hemorrhage is reduced in patients over 90kg).

Not only that, the analysis also shows that the dose of aspirin adjusted according to the patient’s weight can significantly improve the therapeutic effect than simply following the guidelines.

Low-dose aspirin treatment for patients weighing less than 70 kg reduced the risk of cardiovascular events by 23%. This therapeutic effect is only 12% of all patients.

03 How important is the significance of this research?

Of the 116,000 patients who participated in the trial, 80% of men and 50% of women weighed more than 70kg. Therefore, after adjusting according to weight, this part of the population can reduce the risk of drug side effects and improve the effect of drug treatment only by adjusting the drug dosage.

At the same time, in the long run, 30 billion tablets of aspirin are taken each year in the world, and there may be a more “individualized” medication plan in the future; this research idea may also be applied to drug treatment in other fields.

It is precisely because of its “disruptive” results that Professor Roswell’s research article can be published in the top medical journal The Lancet. And it may be foreseeable that in the next few years, doctors around the world will change their medication habits.

So how should general doctors/medical students view the results of this research?

Medicine is a developing discipline, and it is also a discipline that needs to be verified in clinical practice.

Among them, the joint efforts of all clinicians and scientific researchers are inseparable.