A new study by the American College of Physicians found that taking low-dose aspirin daily may improve pregnancy success rates for women who have had a previous miscarriage.

A report published in the Annals of Internal Medicine on January 25 (Monday) found that people who started taking aspirin daily before conception benefited more significantly. 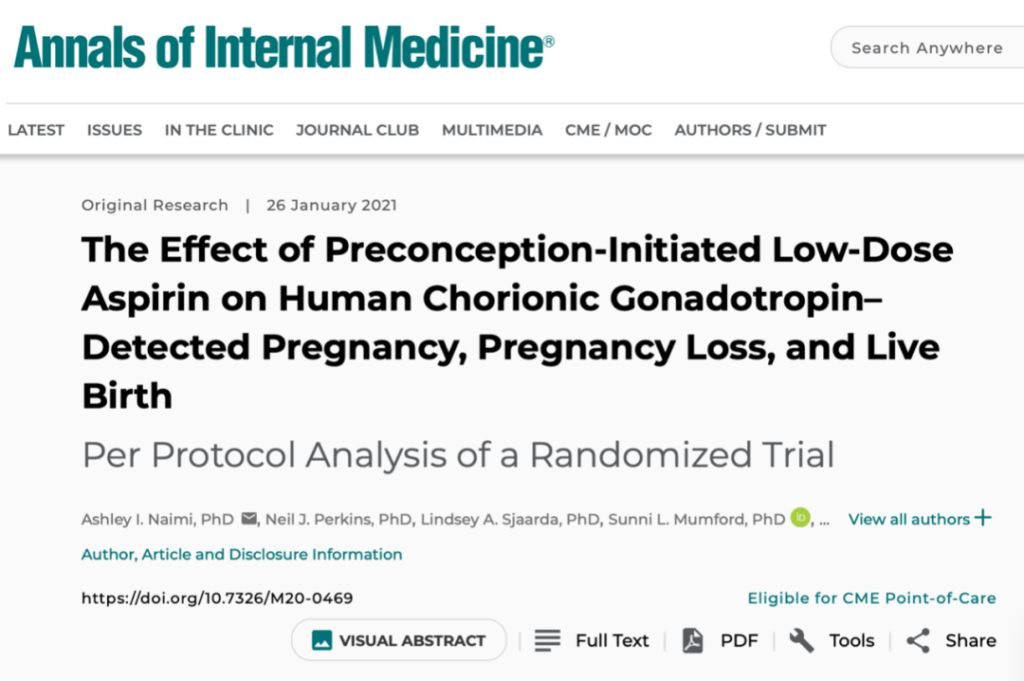 If you insist on low-dose aspirin treatment, the benefits will be more obvious when you take it 4 to 7 days a week.

Researchers suggest that more attention should be paid to educating people on the importance of adhering to aspirin therapy in order to achieve beneficial effects on pregnancy. Due to the risk of bleeding, aspirin is not recommended for everyone, so before trying this method, be sure to discuss the benefits and risks of low-dose aspirin treatment with your doctor.

Researchers from Emory University and the National Institutes of Health assessed the health data of the effects of aspirin in gestation and reproduction (EAGeR) trial, which included 1,227 people who were preparing to become pregnant, and People who have failed one or two pregnancies before.

The previous conclusion of the EAGeR trial is that taking low-dose aspirin daily does not improve pregnancy outcomes. However, the researchers conducted a post-mortem analysis that took into account the strict adherence to aspirin treatment of the included population.

Researchers found that strict adherence to low-dose aspirin treatment for at least 4 days a week can increase the success of every 100 pregnancies in the trial by 8 times, reduce 6 pregnancy losses and increase 15 live births. This means that live births have increased by 30%.

The researchers said these findings indicate that helping people stick to aspirin treatment can ultimately improve the drug’s effect on pregnancy outcomes.

Why does aspirin have such an effect?

Aspirin is routinely recommended for pregnant women with preeclampsia (hypertension during pregnancy) and antiphospholipid syndrome (an autoimmune disease that causes blood clots). Pre-eclampsia affects the growth of the fetus and is fatal to the mother.

Antiphospholipid syndrome can cause miscarriage and increase the risk of preeclampsia.

Aspirin can improve blood flow throughout the placenta and help reduce miscarriage.

The reason why aspirin has such an effect is due to its anticoagulant effect.

Pre-eclampsia is a disorder of placental blood flow, and antiphospholipid syndrome is a blood coagulation disorder, so aspirin is effective for these diseases.

Who can take aspirin?

Researchers recommend that people who have a history of miscarriage before, if they intend to use aspirin to prevent another miscarriage, they can communicate with their doctor.

Because aspirin can increase the risk of bleeding, people who are prone to bleeding, such as those with ulcers, should avoid aspirin treatment. Those who are allergic to aspirin or non-steroidal anti-inflammatory drugs (NSAIDs) should also avoid taking it.

For people who may benefit from aspirin, it is best to start taking a low-dose regimen during pregnancy. If the situation is more serious, other anticoagulant drugs may be recommended.

For most women, maintaining good health before and during pregnancy is more important.