Prevention and treatment of heterotopic ossification

Prevention and treatment of heterotopic ossification.   Although radiotherapy can effectively prevent the occurrence of HO.

Due to the high incidence of heterotopic ossification and the complexity of its pathogenesis, its prevention and treatment have always been paid attention to, and the key to treatment is to relieve pain and improve function of patients. However, the current understanding of the pathogenesis of heterotopic ossification, the most effective prevention plan, the choice of surgical timing, the necessity of physical therapy, and the clinical application of gene-targeted therapy are still unclear. 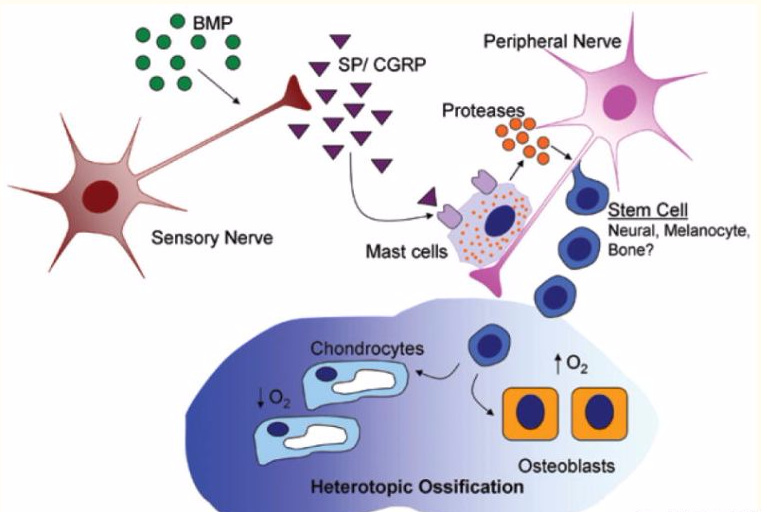 In recent years, most studies believe that the three major conditions required for the formation of heterotopic ossification include:

(2) Osteogenic precursor cells. The long-term inflammatory response can cause the accumulation of osteogenic precursor cells in the surrounding or blood, thereby promoting heterotopic ossification of surrounding tissues. It is generally believed that the most important cell group involved in the formation of heterotopic ossification is mesenchymal stem cells.

(3) Local microenvironment. In a hypoxic environment, hypoxia-inducible factor 1α is easily produced, and various angiogenic factors such as vascular endothelial growth factor, basic fibroblast growth factor, platelet-derived growth factor and angiopoietin 2 are produced thereby, thereby Make vascular endothelial cells move, aggregate and proliferate, and participate in the formation of heterotopic ossification. Therefore, the formation mechanism of HO may be due to the local inflammatory response leading to the body’s release of osteoinductive factors. Under the action of the local microenvironment, osteogenic precursor cells are induced to differentiate into chondrocytes, and then ectopic bone is formed through endochondral osteogenesis.

CT (Computed Tomography, CT) facilitates preoperative planning by improving the three-dimensional visualization of heterotopic ossification related to important anatomical landmarks. In some cases, magnetic resonance imaging may be required to more clearly define the area of ​​local soft tissue or neurovascular involvement. These methods may be helpful when heterotopic ossification is adjacent to the anatomy of the underlying operation.

At present, indomethacin is the most widely used non-steroidal drug in clinical practice and is more effective in preventing heterotopic ossification, but the optimal time, dosage and duration of the drug are not clear. On the other hand, the application of indomethacin has the risk of gastrointestinal adverse reactions, gastrointestinal bleeding and bone nonunion. In view of this, in recent years, some scholars have advocated the use of selective COX-2 inhibitors such as meloxicam to avoid the above adverse events, but most of them are used for short-term use, because long-term use has the risk of increasing the incidence of cardiovascular events .

Radiotherapy: The mechanism of radiotherapy is to prevent the production of bone morphogenetic protein (BMP) by killing local monocytes and macrophages, and to inactivate pluripotent mesenchymal cells to block their response to BMP, thereby achieving The effect of inhibiting the occurrence of HO. Studies have confirmed that low-dose radiotherapy has the advantages of low recurrence rate and high safety. It can not only effectively prevent HO after spinal cord injury, but also serve as the primary prevention of HO after total knee replacement.

In recent years, a large number of studies have explained the mechanism of heterotopic ossification from the molecular and cellular level. Jonathan et al. have confirmed that mesenchymal stem cells (MSC) are the main cells that affect the formation of HO through in vivo and in vitro experiments, and use adenosine triphosphate bisphosphatase in The burn site is hydrolyzed by adenosine triphosphate (ATP) to prevent the occurrence of HO.

Zhang Chi et al. were inspired by the pathway of endothelial cells to mesenchymal cells in the course of HO. Through local injection of viral vectors transfected with SMAD7 gene in rat Achilles tendon injury models, they found that SMAD7 can prevent postoperative transformation by regulating endothelial-mesenchymal transition. The formation of HO does not affect the normal wound healing process.

In addition, some scholars have found that high molecular weight polyethylene particles can act locally and effectively prevent heterotopic ossification, but its mechanism of action may be related to the release of local inflammatory factors. Although the above research is still in the stage of animal experiment research, the research on molecular biological mechanism provides a new direction for the prevention of HO.

TCM related methods: Heterotopic ossification belongs to the category of “blood stasis” in TCM. It is mostly injury or postoperative. Muscle and vein damage can cause qi stagnation and blood stasis, block meridians or cause blood to overflow the vein. Solid, wind, cold and dampness will take advantage of deficiency and block the muscles and bones. The treatment method should be based on invigorating qi and activating blood circulation, removing blood stasis and relieving pain, softening the firmness and dispelling the masses. Clinically, you can choose traditional Chinese medicine oral administration, traditional Chinese medicine fumigation, and small needle knife loosening to prevent the formation of heterotopic ossification. 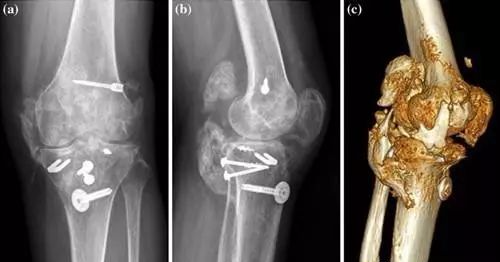 Chakkalakal et al. found through mouse experiments that specific mutations in the ACRV1 bone morphogenetic protein receptor with R206H mutations can cause HO in the cartilage, so they studied parovastin, which can quickly attach to RARy and change the osteogenic ability of progenitor cells. , To prevent the ossification of soft tissue and subcutaneous tissue in an irreversible way, so as to achieve the effect of treating heterotopic ossification. The author believes that although the drug has been proven to be effective in the treatment of HO in mice, a large number of clinical studies are needed to confirm its safety and effectiveness.

Although some scholars believe that early physical therapy may aggravate HO, it will still be helpful for HO patients with neurogenic or joint dysfunction. Studies have shown that electromagnetic intervention in the form of pulsed low-intensity electromagnetic fields can effectively relieve pain and improve joint function without any side effects, especially for chronic neurogenic heterotopic ossification.

In addition, extracorporeal shock wave therapy is also considered as a new non-invasive intervention for the treatment of chronic neurogenic heterotopic ossification. Some scholars have performed extracorporeal shock wave therapy on 11 patients with chronic neurogenic heterotopic ossification after traumatic brain injury, and found that it can effectively relieve the pain of patients with HO and improve the function of the elbow joint. They believe that its mechanism of action may and influence Related to the production of anti-inflammatory cytokines.

At present, most opinions believe that surgery is the most important and effective treatment, and the indications for surgery have nothing to do with the age of the patient, the time of occurrence of heterotopic ossification, the joints involved or the factors of the primary injury. Nowadays, the most clinically used surgical method with the best curative effect is the resection of heterotopic ossification and joint lysis. The main purpose of surgical treatment is to improve joint function, but after surgery, it is still necessary to combine drugs, radiotherapy and active and passive exercise of joints. To consolidate the effect of surgery and prevent HO recurrence. There are big differences in the timing of surgery.

Heterotopic ossification is not uncommon in clinical practice, but its pathogenesis is not fully understood. It is mainly caused by skeletal muscle trauma, bone and joint surgery, or neurological injury. The clinical manifestations are mainly joint swelling, pain, and movement disorders , Mostly occurs around the hip, knee and elbow joints.

For the prevention of heterotopic ossification drugs, especially the selection of NSAIDs drugs, the drugs and the timing, dosage, and course of treatment should be selected individually according to the patient’s age, combined underlying disease and other factors, in order to obtain the best effect and avoid adverse effects to the greatest extent React to events.

Although radiotherapy can effectively prevent the occurrence of HO, it is expensive and the technology is not yet mature in primary hospitals. Therefore, for patients with general economic conditions and no relevant contraindications, or medical conditions do not allow it, it is still recommended to prefer NSAIDs for drug prevention. In addition, you can also try to choose Chinese medicine methods appropriately.