NEJM: The 40-year problem of aspirin is ushered in the answer, and low-dose is recommended for cardiovascular disease

NEJM: The 40-year problem of aspirin is ushered in the answer.  Aspirin has a history of more than 100 years since it was invented, and now it has entered thousands of households as an antipyretic and analgesic. Surprisingly, in recent years, scientists have unexpectedly discovered that the efficacy of aspirin is much more than that. More and more studies have shown that aspirin has certain preventive and therapeutic effects on cardiovascular diseases, neurodegenerative diseases and even cancer.

Therefore, aspirin, which has many curative effects, has been given the reputation of “magic drug”, which has also allowed scientists to never stop researching on it. It is worth noting that some studies have shown that aspirin helps prevent the formation of blood clots, so it is widely used in prescriptions for patients with heart disease, but at the same time, aspirin may also increase the risk of bleeding.

Since the 1980s, aspirin has been identified as a long-term drug for patients with ischemic heart disease. The benefits of taking aspirin are obvious for those who have had a heart attack, have undergone bypass surgery, or need a stent for blocked arteries. . However, due to the risk of side effects, some patients will violate the doctor’s advice to reduce the dosage or even stop the medication without authorization.

So, does taking low-dose aspirin have a safety advantage over regular doses? What is the best dosage of aspirin? These problems still need to be confirmed by further clinical investigations based on the real environment.

On May 15, 2021, research institutions such as Duke University Clinical Research Institute, University of North Carolina at Chapel Hill and Wake Forest University jointly published the title: Comparative Effectiveness of Aspirin in the New England Journal of Medicine (NEJM) Research paper on Dosing in Cardiovascular Disease.

This clinical research study allowed thousands of heart disease patients to self-register and track their health status of taking low-dose or regular-dose aspirin online. The results of the study show that there is no significant safety difference between the two doses in preventing additional heart disease and stroke. Therefore, the research team recommends that patients take low-dose aspirin. 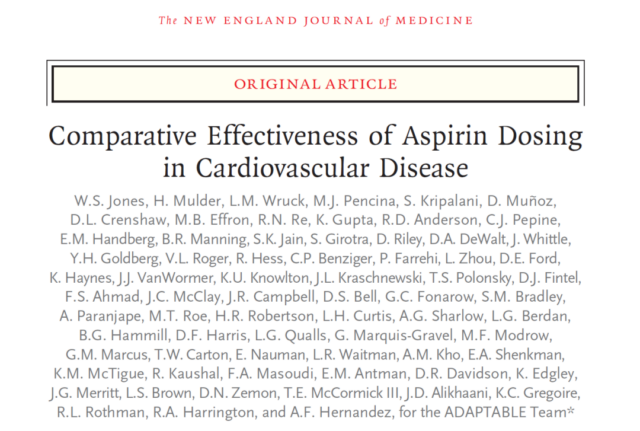 In this study, the research team invited about 15,000 people to participate in the clinical survey via email, email or phone. These participants will register information on a website and self-report every three to six months. In addition, a network of participating health centers will also provide medical information about participants from their electronic records and insurance claims.

These participants were randomly assigned to two groups with different aspirin dosages-the low-dose group or the regular-dose group, corresponding to 81mg or 325mg of aspirin per day. The research team evaluated the combined results of these patients due to major bleeding, death from any cause, hospitalization for myocardial infarction, or hospitalization for stroke in an event time analysis. 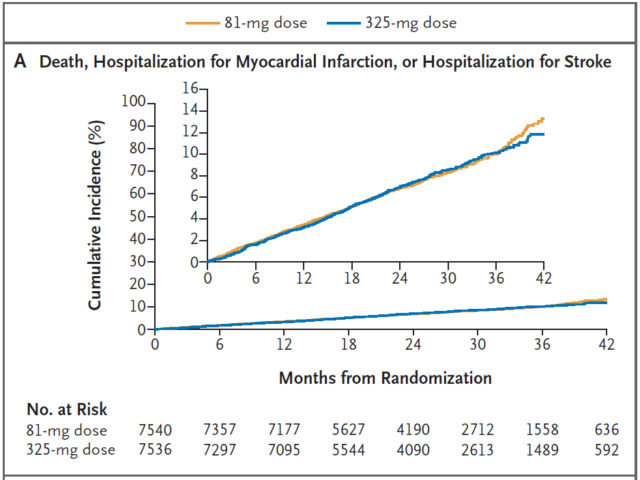 There was no significant difference in the rate of hospitalization due to death, heart attack or stroke between the two dose groups

However, patients are generally more inclined to take low-dose aspirin-compared with the low-dose group, the dose conversion rate of the conventional dose group is higher (41.6% vs 7.1%), and the median number of days exposed to the specified dose is less ( 434 days vs 650 days). 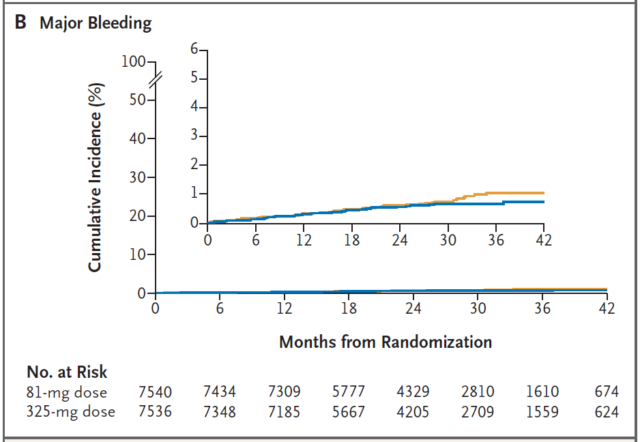 To put it simply, whether it is the low-dose group or the regular-dose group, the rates of hospitalization due to death, heart attack, stroke or hemorrhage during the two-year follow-up period are very close. Therefore, if the patient is currently taking a low dose of aspirin, it is obviously the right choice to continue to maintain this dose, but for those patients taking the regular dose, if they have any concerns, they should consult a doctor as soon as possible.

In this regard, Dr. Schuyler Jones, the main leader of this study, said: Judging from the results of the study, it is recommended to take a low-dose aspirin.

At the same time, Dr. Salim Virani, a cardiologist at Baylor College of Medicine in Houston, also warned patients: It is important not to change the dose or stop the medication without authorization, especially for treatments such as aspirin.

All in all, this study shows that both low-dose and regular-dose aspirin can prevent the occurrence of cardiovascular disease, and there is no significant difference in safety. Therefore, for people who already suffer from heart disease, taking a low-dose aspirin is undoubtedly a more economical choice. There is no need to increase the dose, but at the same time, be careful not to change the doctor’s order to further reduce the dose or even stop taking the drug.