New cancer vaccines are expected to save patients with advanced cancer

Cancer has always been one of the diseases that have plagued humans for a long time, but people have not been defeated by it. Vaccines are undoubtedly one of the most milestone inventions in the struggle between humans and diseases. Similarly, vaccines have also played a pivotal role in the treatment of cancer!

The therapeutic PD-1 cancer vaccine is proven safe and effective!

After animal studies have shown encouraging efficacy and strong safety, a new cancer vaccine is entering the first phase of human trials in the United States. A new study describes that when the vaccine is used in combination with a second immunotherapy drug, 90% of animals have a complete response.

PD-1 inhibitors are a relatively new class of drugs that allow “killer” immune cells to detect and kill cancer cells more effectively. In recent years, several first-generation anti-PD-1 monoclonal antibodies have been approved for the treatment of various cancers.
This new therapy, called PD1-Vaxx, is designed to trigger a broader polyclonal antibody response and is expected to have better efficacy than the first-generation checkpoint inhibitors. 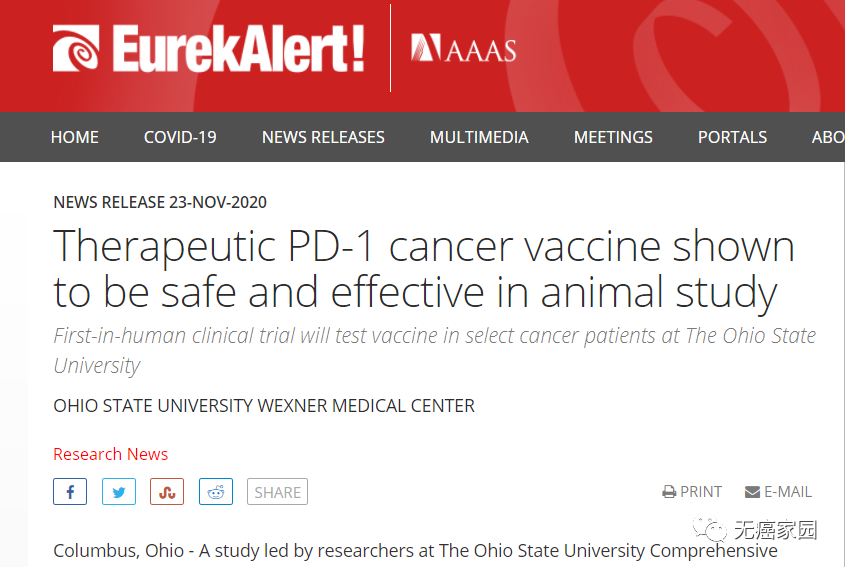 This study was published in the October 1st issue of “Tumor Immunology”. This PD1-Vaxx vaccine is the first checkpoint inhibitor vaccine, mimicking the effect of the PD-1 inhibitor nivolumab (trade name: Opdivo) , But avoid the innate and acquired resistance associated with the drug and related drugs.
PD1-Vaxx activates B cell and T cell functions at the same time, thereby guiding the immune system to target and kill cancer cells.

The study also found that PD1-Vaxx can inhibit tumor growth in the same animal model of colon cancer. When combined with a second therapeutic peptide vaccine (B-Vaxx, which targets two sites on the HER-2 receptor of colon cancer cells), it is even more effective.
The combination treatment produced a complete response to 9 out of 10 animals.

In early November, the US Food and Drug Administration (FDA) approved PD1-Vaxx to enter Phase 1 human trials in the United States. Earlier this year, the Australian authorities gave similar approval to start a branch of the Phase 1 trial there.
The upcoming clinical trials will focus on patients with non-small cell lung cancer.

On November 11, a piece of news about “a viable vaccine against malignant tumors” dominated the headlines of major foreign media. This new vaccine is a strong combination of chemotherapy and immunotherapy. It is currently tested in a mouse model of one of the most difficult to treat cancers-triple negative breast cancer. The results are very encouraging. The mice survived the vaccine injection and did not relapse. This heavy research was also published in the top international journal “nature communications”. 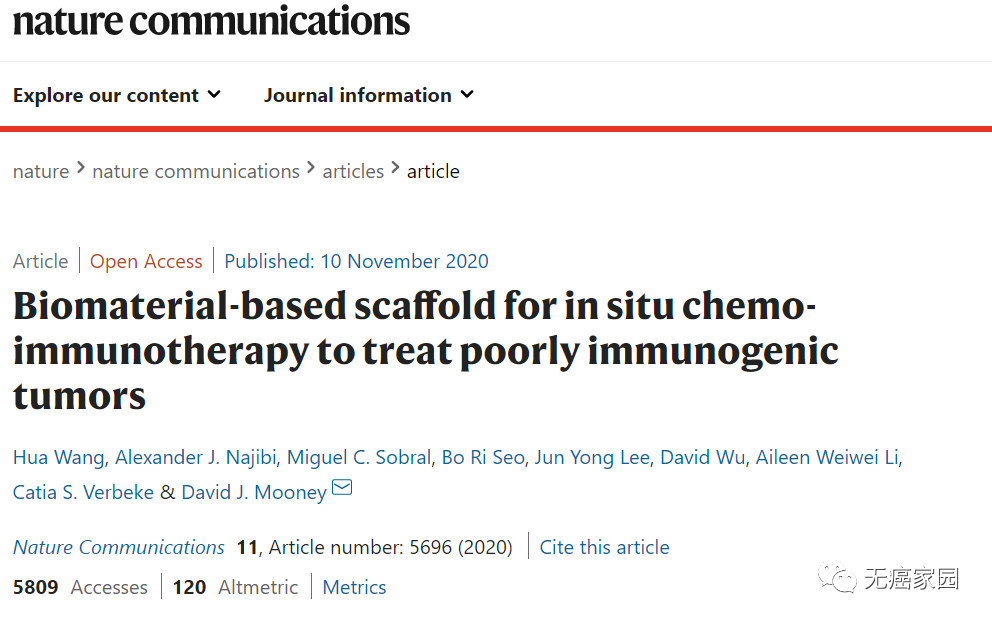 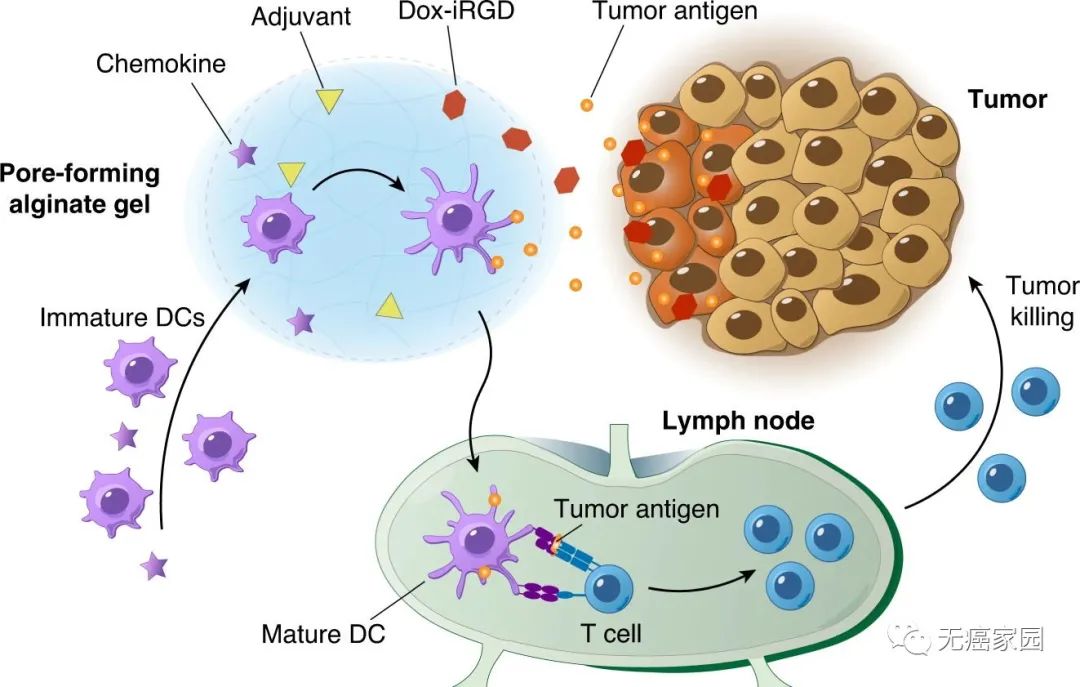 Interpretation of the picture: By subcutaneous injection of biomaterials, Dox-iRGD is released into the tumor and induces the immunogenic death of tumor cells, and the released chemokines can accumulate a large number of immature dendritic cells (DC) at the scaffold site . The accumulated DC can absorb and process tumor antigens, while being activated by adjuvants to trigger tumor-specific T cells, thereby killing tumor cells.

The results are amazing! 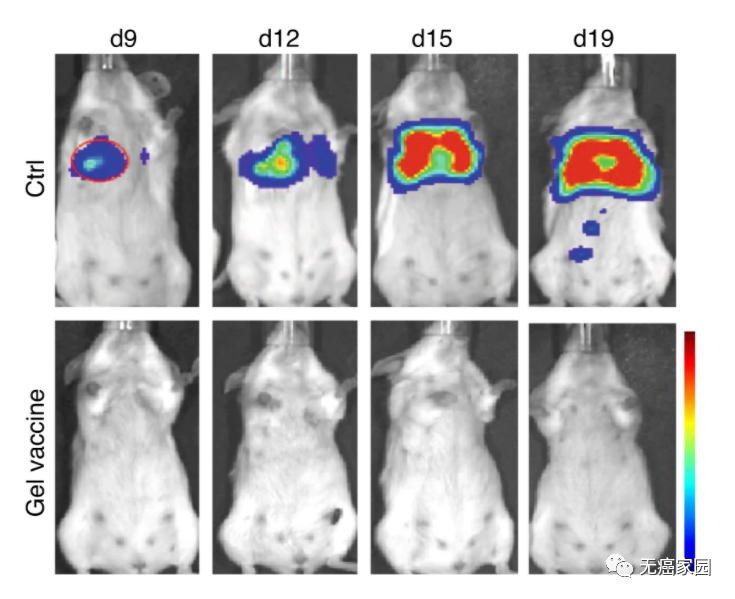 2. The mice receiving the vaccine have more pro-inflammatory macrophages, which indicates that the anti-cancer activity is stronger, which is related to a longer survival rate.

3. The combined effect of PD-1 is better.

The researchers implanted the vaccine into mice and then injected anti-PD-1 separately. The mice treated with the combination showed a significant reduction in tumor size and number, and survived for 40 days, compared with 27 days for untreated mice and 28 days for mice receiving only anti-PD-1. This synergy shows that the combination of vaccine and PD-1 is more effective.

Surprisingly, 100% of the mice that received the gel vaccine survived without metastasis, while all untreated mice died of the disease.
This means that this vaccine can not only destroy tumor cells, but also has a memory function, which can provide long-term protection in the body to prevent tumor recurrence throughout the body!

In addition to the new cancer vaccine mentioned above, the data of the AV-GBM-1 personalized cancer vaccine was amazing not long ago. According to the editor of Cancer Free Home, this new vaccine is used in newly diagnosed glioblastoma patients. Can significantly improve progression-free survival (PFS).

The results presented during the 2020 SITC annual meeting showed that this vaccine enabled 69% of patients to achieve 7-month progression-free survival, which is better than the historical record (50%). The median progression-free survival of the vaccine was 10.0 months, and in the landmark study, the standard treatment reached 6.9 months. According to the interpretation of cancer-free home experts, this means that in 6.9 months of treatment, the risk of progression or death is reduced by 38%.

In addition, the overall survival rate (OS) of AV-GBM-1 at 12 months is 72%, which is also satisfactory compared with the historical record of 61%.

This vaccine showed in the Phase II clinical trial data released by Aivita Biomedical, the company that developed immunotherapy, on April 8, 2020:

This shows that the 15-month overall survival rate of patients receiving AV-GBM-1 treatment has increased by 28%, and the effect is exceptionally significant.

This dendritic cell vaccine can carry specific antigen information extracted from tumor tissues after surgery. After injection, the antigen information is transmitted to T cells to stimulate tumor killing activity. Although the autologous vaccine for patients is logically complicated, it is a feasible method that can be administered simultaneously with temozolomide and radiotherapy; it can also be injected with AV-GBM-1 vaccine after recovery from chemotherapy and radiotherapy. If patients can successfully perform single-disciplinary white blood cell collection, they are eligible to participate in the study under the age of 70.

This therapy is theoretically applicable to all solid tumors. In addition to glioblastoma, Aivita Biomedical is also conducting clinical trials of two other AV-GBM-1 in other tumor types.

When it comes to dendritic cell vaccines, everyone is not unfamiliar. I mentioned it many times in previous articles.

At present, most DC vaccines have been widely recognized by the international medical anti-tumor field and have been used in the clinical treatment of various cancers. This is a new hope for the treatment of cancer patients.

among them, The most eye-catching is Provenge (sipuleucel T), which is the first vaccine approved for treatment in the United States, ushering in a new era of cancer immunotherapy.

This is an autologous cell immunotherapy, which was approved by the US FDA on April 29, 2010 for the treatment of asymptomatic or mildly symptomatic metastatic castration-resistant prostate cancer (mCRPC). This approval marks 20 years Unremitting efforts finally succeeded.

In the United States, Provenge is the only FDA approved prostate cancer immunotherapy made from patients’ own immune cells.

So far, more than 30,000 male patients have been prescribed Provenge treatment, which has been clinically proven to prolong the lives of men with advanced disease.

In addition, Germany and Japan also have dendritic cell vaccines for clinical adjuvant treatment of a variety of cancers, such as lung cancer, liver cancer, kidney cancer, breast cancer, and skin cancer.

Dendritic cell vaccines have been widely recognized by the international medical anti-tumor field, and have been used in clinical studies of various cancers. This is a new hope for the treatment of cancer patients.