AACR: Vaccines are expected to treat many kinds of cancers!

AACR: Vaccines are expected to treat many kinds of cancers!   Two new cancer vaccines are gaining momentum, and cancer-free survival is no longer a luxury!

Preventing cancer and curing cancer have always been problems that modern medicine wants to overcome.

Vaccines seem to be the best choice. From the successful development of cervical cancer vaccines to the recent emergence of new anti-cancer vaccines in the United States, it seems that cancer is not far from being eliminated. Perhaps cancer-free survival is no longer an extravagant hope in the near future!

For decades, cancer vaccines have become a form of immunotherapy, which can prevent the development of cancer or kill existing tumors by stimulating or restoring the body’s own immune system.

In addition to the HPV vaccine, which is a well-known preventive cancer vaccine, the world’s first and only cancer treatment vaccine approved by the US Food and Drug Administration is Provenge (sipuleucel-T). This vaccine is the first to use patients. The assumption that one’s own immune system attacks cancer cells.

Speaking of the most exciting recent news, it is tantamount to the outstanding research on cancer immunotherapy at the AACR annual meeting in 2021: CAR-T cell therapy, PD-1/PD-L1 inhibitors, oncolytic viruses, and Cancer vaccines, etc.

Today we will talk about a new type of outstanding performance at the AACR annual meeting: Personalized cancer vaccine-PGV-001. 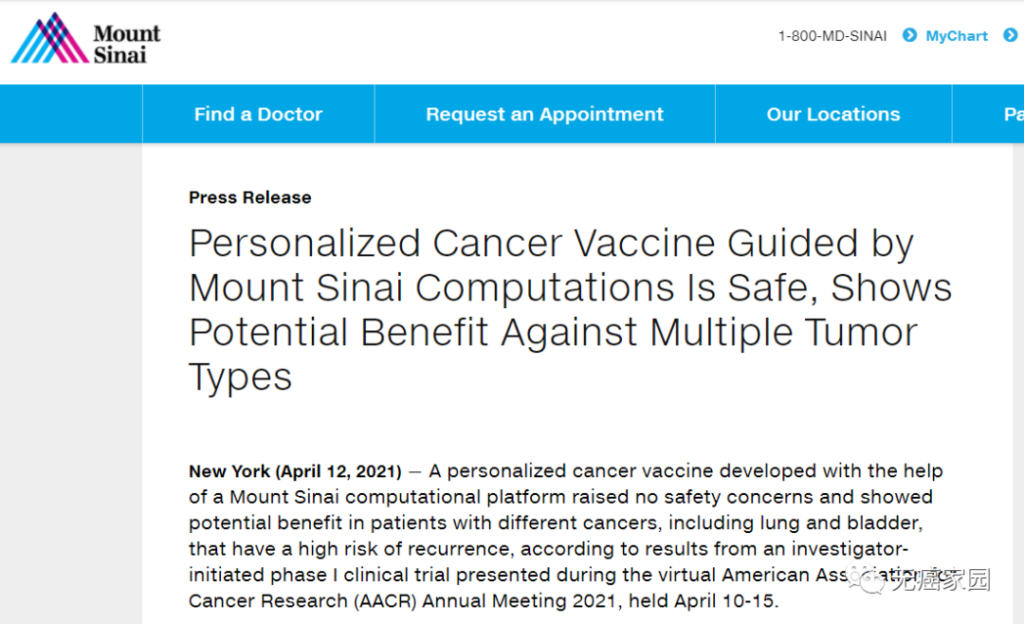 Different from traditional cancer vaccines, the personalized cancer vaccine (PGV-001) is an adjuvant therapy vaccine specially used after standard treatment, which helps to remove residual cancer cells in the body and prolong the survival of patients.

In order to explore the safety of cancer vaccines, in this study, 13 patients were included in the cancer vaccine treatment of the Mount Sinai team, including 10 solid tumor patients and 3 multiple myeloma patients.

Surprisingly, in the actual treatment, the patients received the cancer vaccine as a whole well tolerated. After 880 days (2 and a half years) follow-up, 4 patients still survived cancer-free, and there were also 4 patients. Continue to receive treatment.

Only one-third of patients have mild injection site reactions, and the overall treatment effect is very good!
The main goal of the Phase 1 trial is to determine the safety of the experimental treatment, and the trial has achieved this goal. The researchers also saw that after a blood test on one of the patients showed an immune response to the vaccine, the vaccine had early potential benefits, while the other two patients later responded strongly to immunotherapy. This result It is normal after exposure to cancer vaccines.

Since the completion of the trial, Mount Sinai has started or plans to conduct five other Phase 1 trials that will integrate OpenVax (Mount Sinai’s computational pipeline, which enables researchers to identify and prioritize immunogenic targets to synthesize and Integrated into the vaccine.) Treat other cancers including glioblastoma, bladder cancer, prostate cancer, and myeloproliferative tumors (blood cancer) together with other therapies.

The three-year survival period of the new glioma vaccine has increased by 84%! lead to uproar!

Recently, a glioma vaccine against IDH1 mutations caused quite a stir in the industry. The data of this small-scale clinical trial with only 33 participants was published in the journal Nature.

IDH1 mutation is a common carcinogenic mutation in glioma, cholangiocarcinoma, leukemia and many other tumors. Compared with wild-type patients, patients with this mutation are more malignant and more difficult to treat.

Therefore, scientists from the German National Cancer Center have developed a peptide vaccine against IDH1 mutations. This vaccine is very convenient to use and can be injected subcutaneously.

This clinical trial recruited 32 patients with high-grade glioma who underwent standard treatment (surgery + radiotherapy and chemotherapy) and received 8 subcutaneous injections of IDH1 vaccine after the end of standard treatment. The median follow-up was 4 years: it is worth mentioning Yes, the vaccine successfully activated a targeted immune response in 93.3% of patients.

The 2 patients who failed to activate the body’s immune response had tumor recurrence within 2 years of treatment without exception. The 3-year survival rate of the entire group of patients was as high as 84 %.

Judging from the above preliminary results, IDH1 vaccine is safe and effective.

The dawn of a new type of dendritic cell vaccine has appeared, with an overall survival time of 76% at 15 months!

On April 8, 2020, the Phase II clinical trial data of the new dendritic cell therapy AV-GBM-1 was announced. The study showed that this new vaccine is extremely effective in prolonging the mid-term overall survival of newly diagnosed glioblastoma patients. Great potential.

AV-GBM-1 is a patient’s own specific dendritic cell vaccine, which aims to use the patient’s own immune system to find and eliminate cancer cells. This dendritic cell vaccine can carry specific antigens extracted from tumor tissues after surgery. After the injection, the antigen information is transmitted to the T cells to stimulate the tumor-killing activity. Although the autologous vaccine for patients is logically complicated, it is a feasible method that can be administered simultaneously with temozolomide and radiotherapy; it can also be injected with AV-GBM-1 vaccine after recovery from chemotherapy and radiotherapy. If patients can successfully perform single-disciplinary white blood cell collection, they are eligible to participate in the study under the age of 70.

This therapy is theoretically applicable to all solid tumors, so in addition to glioblastoma, Aivita Biomedical is also conducting clinical trials of two other AV-GBM-1 in other tumor types.

Through consulting a large number of literature materials, I specifically listed some heavy researches for everyone. If you want to know more detailed clinical trials, you can call for consultation.

The DCVAC dendritic vaccine is a live cell immunotherapy that uses its own dendritic cells to be produced and customized for each patient in an attempt to induce an immune response against tumor antigens.

At the 50th Annual Meeting of the Society of Gynecological Oncology (SGO) in 2019, the final results of a phase II clinical trial SOV02 were announced: patients with relapsed, platinum-sensitive, epithelial ovarian cancer using dendritic cell-based immunotherapy DCVAC/OvCA added The standard carboplatin and gemcitabine regimen can extend the overall survival (OS) of patients with advanced recurrence of ovarian cancer by more than one year.

Moreover, DCVAC/OvCa reduced the risk of death from second-line treatment for ovarian cancer by 62%. The overall survival (OS) increased significantly by 13.4 months. The median progression-free survival rate (mPFS) increased by 1.8 months. The global phase III study will be launched soon.

The results showed that on the 56th day, 25% of patients were in stable condition (the size of the tumor did not increase or decrease). In 54% of patients, CD8 cells infiltrated the tumor, and the expression of PD-L1 in patients also increased significantly after vaccination. Side effects are manageable and are mainly limited to flu-like symptoms, nausea and fatigue.

The biotechnology company Northwest Biotherapeutics recently announced the interim trial data of its lead therapy DCVax®-L for the treatment of newly diagnosed glioblastoma multiforme (GBM) in a Phase III clinical study. A total of 331 patients were enrolled in the study. All patients had undergone surgical resection and received 6 weeks of standard care treatment SOC radiotherapy and chemotherapy before being enrolled in the study.

At present, Germany and Japan also have dendritic cell vaccines for clinical adjuvant treatment of a variety of cancers, such as lung cancer, liver cancer, kidney cancer, breast cancer, skin cancer, etc. This is a new hope for the treatment of cancer patients.