Treatment of ependymal tumors of the spinal cord

The prognosis of spinal ependymoma is better than that of spinal astrocytoma, but in addition to GTR, the factors affecting the prognosis have not been determined. It was analyzed in “Surgical Treatment of Spinal Ependymomas: Experience in 49 Patients”, which was led by Professor Joachim K. Krauss, a member of the INC World Neurosurgery Advisory Group and Chairman of the World Federation of Neurosurgery (WFNS) Stereotactic and Functional Neurosurgery Committee. MHH (Hannover Medical School) has treated 49 patients in 18 years, 72% of which have obtained total resection. It is pointed out that total resection is the first choice for the treatment of spinal ependymoma. Surgery is performed in the early stage of the disease and when the neurological symptoms are mild. The prognosis is better at this time.

The following two cases were operated by Professor Krauss, and both achieved full resection (Figure 1 and Figure 2) 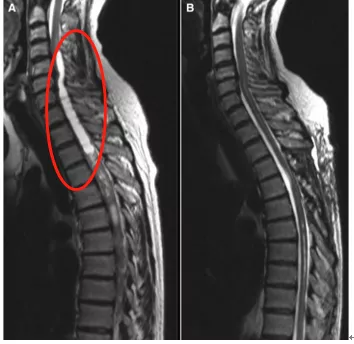 Figure 2: (A) T2MR showed that the tumor continuously involved 6 segments of the cervical and thoracic spinal cord, accompanied by a cavity on the caudal side of the skull and oblongata. (B) Nuclear MR at 3 months after the tumor was completely resected showed that the cavity almost disappeared.

The advancement of microsurgery technology makes GTR better than partial subtotal resection as a standard treatment for spinal ependymoma. In most cases, GTR can perform good functional results. Since good functional results are related to smaller tumors and good neurological status during surgery, resection is considered in the early stages of the disease.

When GTR is not feasible due to spinal cord or nerve root infiltration, postoperative local radiotherapy is generally used. A recent review of the literature of 348 patients with WHO grade II and III spinal ependymoma, these patients underwent surgery with a known resection range (GTR or STR), with or without postoperative radiotherapy.

A large number of retrospective studies were conducted on MEP, including a large multi-institution series of 183 patients. The 10-year OS was 92.4%, and the 5-year and 10-year PFS were 69.5% and 61.2%, respectively. Local recurrence occurred in 84% of patients, and spread of pia mater in 9.3% of patients. The degree of resection is a major independent factor predicting local control.

However, the irregular shape, contact with peripheral nerve roots and the production of mucous matrix, especially in the terminal filaments, will greatly increase the difficulty of the operation. An analysis of patients by the Surveillance, Epidemiology, and Final Results (SEER) project confirmed that the OS after 10 years was more than 90%. The prognosis of presacral MPE is worse than that of terminal filament/cauda equina.

Compared with patients treated with surgery alone, postoperative radiotherapy, especially high-dose (≥50gy) radiotherapy, can improve local control rate and PFS (10-yPFS increased from ˂40% to 70%), and it is well tolerated without significant The delayed toxicity. A small series of studies on adult spine MPE patients showed that patients with GTR combined with adjuvant radiotherapy have better local control than patients treated with GTR, but alone, prospective confirmatory data are needed. MPE is rare in children.

Although patients often develop disseminated tumors and/or develop recurrence or progressive disease after treatment, the 5-year and 10-year OS in the SEER database is estimated to be 97% and 95%, respectively.

Ependymoma of the spinal cord is a challenging tumor and surgical resection is still the main treatment. There are only a few other tumor entities in the central nervous system. The skills of highly skilled and experienced neurosurgeons play an important role in improving survival and quality of life.