Experts explain what Subdural effusion will cause

Experts explain what Subdural effusion will cause.  Traumatic subdural hydromas are caused by brain tissues that move strongly in the cranial cavity during head injury, causing the arachnoid membrane to be torn, and cerebrospinal fluid flows through the hole to the subdural space between the subdural and the arachnoid. The rate is 1.16% of craniocerebral injuries, which accounts for about 10% of traumatic intracranial hematomas.

The mechanism is that the arachnoid puncture is just like a one-way valve, and the cerebrospinal fluid can continuously flow out with the patient’s struggling, breath-holding, coughing and other forceful actions, but it cannot return to the subarachnoid space, which eventually results in the formation of water tumor-like subdural Fluid accumulation, causing local brain compression and progressive intracranial pressure increase.

The clinical manifestations of subdural hydromas resemble subdural hematomas, and there are acute, subacute and chronic distinctions, which are difficult to distinguish before surgery.

Its clinical features are that the primary brain injury is often mild, and there are symptoms of increased intracranial pressure such as headache, vomiting, and papilledema after the injury. The course of the disease is mostly subacute or chronic, and occasionally an acute course.

In severe cases, it can also lead to temporal lobe uncinate hernia. About 30.4% of patients have unilateral mydriasis, and about half of them have conscious progressive deterioration and positive pyramidal tract signs. The amount of subdural effusion is generally 50-60ml, with more than 150ml. Most of the patients with acute symptoms are bloody cerebrospinal fluid, which turns into yellow clear liquid after a while, and the protein content is slightly higher than normal.

The diagnosis of this disease must rely on special examinations, such as CT or MRI. Sometimes, even if CT scans are used, it may be confused with iso-density or low-density subdural hematomas (Figure 1-12). However, the signal of the effusion on the MRI image is similar to that of the cerebrospinal fluid, and the hematoma signal is stronger. Especially in the T, weighted image, the hematoma has a high intensity signal, which can be used to distinguish. 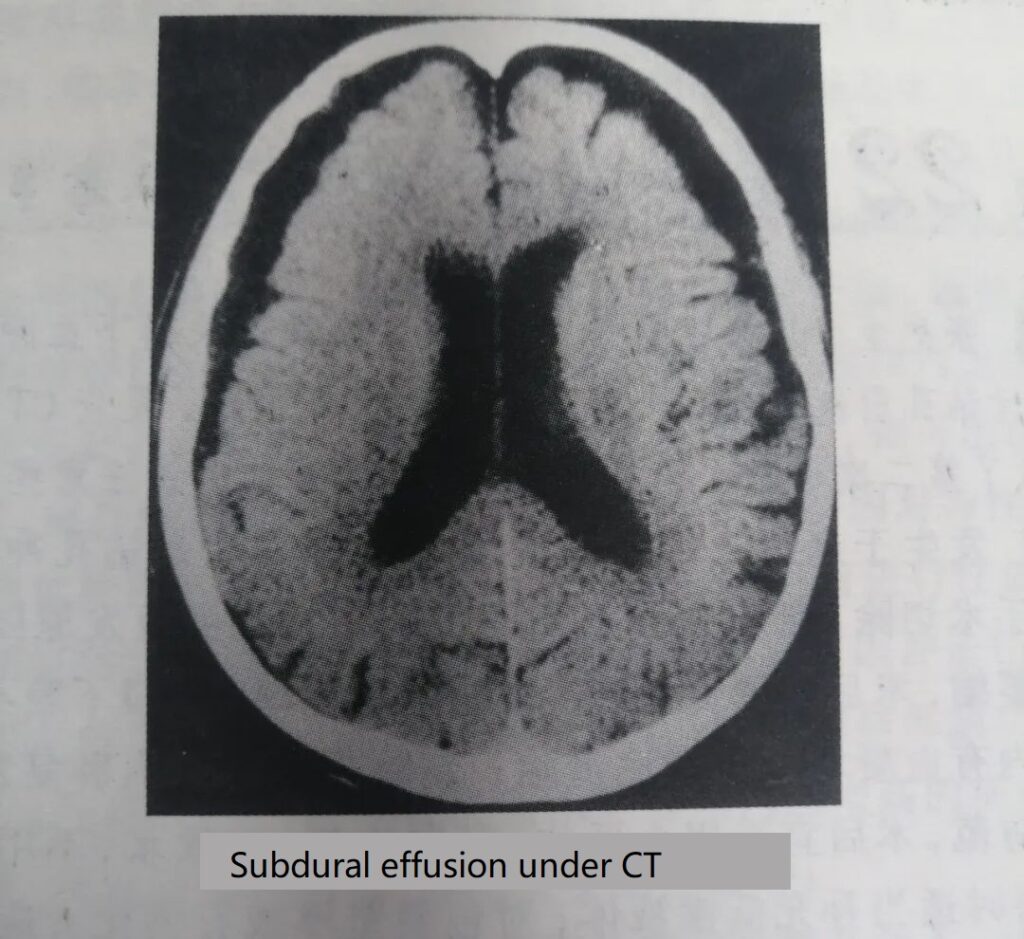 The treatment of traumatic subdural hydromass generally uses drilling and drainage, that is, a drainage tube is placed in the low position of the effusion cavity, and an external sealing drainage bag (bottle) is used to prevent pneumocranium. At 48-72 hours after the operation, the drainage tube is removed before the effusion cavity has been significantly reduced and the cerebral edema has not subsided to avoid recurrence.

For chronic effusions, in order to swell the brain tissue and better close the effusion cavity, strong dehydrating agents can be used less or less after surgery. The patient lie supine or head down to the affected side to promote brain tissue reduction. If necessary, 20-40ml of saline can be slowly injected through lumbar puncture, which is also conducive to the closure of the residual cavity.

For a small number of recurring cases that do not heal for a long time, periconeal or bone window craniotomy can be used to clear the effusion, and the thickened cyst wall can be extensively cut to communicate with the subarachnoid space, or a tube can be placed to connect the effusion cyst cavity to the brain The basal cistern is connected, and the bone flap can be removed if necessary to allow the scalp to collapse to reduce the residual cavity of effusion.