Later, when the experts conducted an internal review of the project, they realized that the accuracy of this non-invasive preimplantation chromosome screening technology was far lower than expected, which may result in a large number of normal embryos being abandoned, and they decided to call it urgently. Stop the project. The same situation also appeared in the Adelaide Fertility Centre in Australia.

At present, as many as 100 couples from Victoria, New South Wales, Capital Territory and other regions have filed class actions against reproductive centers. The lawyer said that there may be more than 1,000 victims.

It is reported that the Monash Fertility Center launched a non-invasive PGT testing technology nationwide in May 2019. It was only in late September 2020 that it realized the problems and seriousness of the technology. Unfortunately, the testing project has been It has been used 13,000 times, involving hundreds of families of IVF patients. 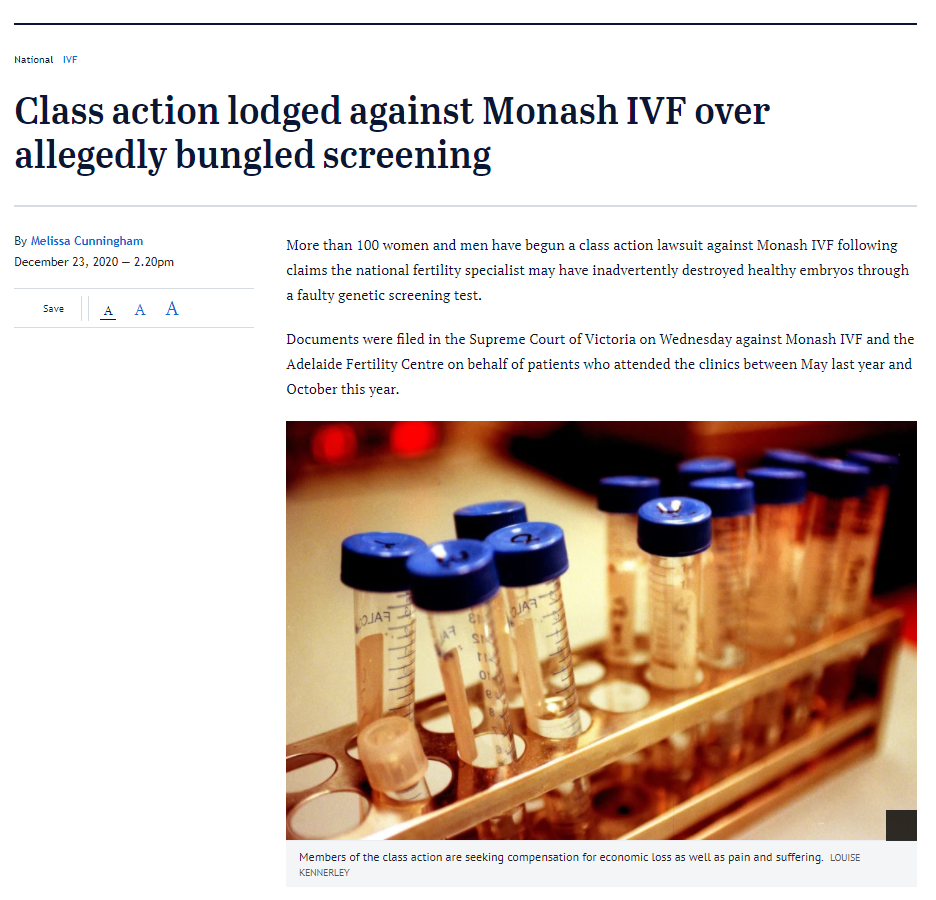 “They said to me, “This is cutting-edge technology.”” A Melbourne woman who had undergone this non-invasive PGT test said in an interview, “I’m really very, very angry because this is a technology that is not ready to be launched. .”

Non-invasive preimplantation chromosome detection technology is a technology that has attracted more attention in recent years. It is different from traditional preimplantation genetic testing technology. This technology claims that embryos can be accurately evaluated using only embryo culture fluid or blastocyst cavity fluid. However, since the technology was introduced, it has been controversial due to accuracy issues.

In August 2019, a review article on non-invasive PGT was published in Human Reproduction Update, a well-known international journal of assisted reproduction, and conducted an in-depth evaluation of the technology’s multi-center research data.

The article summarizes the research progress and current limitations of non-invasive PGT technology.

The low content and poor integrity of free DNA in blastocoel fluid and embryo culture fluid bring great challenges to chromosome euploidy analysis;
Due to the limitations of the detection population, sampling methods, single-cell amplification technology and bioinformatics analysis methods, the consistency of non-invasive PGT test results and PGT test results are quite different;
The influence of free DNA contamination from non-embryo origin on the results of non-invasive PGT detection cannot be ignored;
Since the culture system of embryo culture fluid has been repeatedly verified, changes in the culture system that use micro-droplet culture to increase the concentration of free DNA may affect embryo development and vitality.

At the end of the article, it is stated that in view of the many uncertainties and accuracy problems of non-invasive PGT, the technology is still a long way from clinical application.

The Australian class action lawsuit against non-invasive PGT technology has also sounded the alarm for all clinical institutions engaged in assisted reproductive treatment. We cannot help but ask, if an uncertified technology is widely used in IVF treatment, who should be Responsible for birth defects caused by implanted embryos?