Minimally invasive surgery for the treatment of ventricular cast hematoma 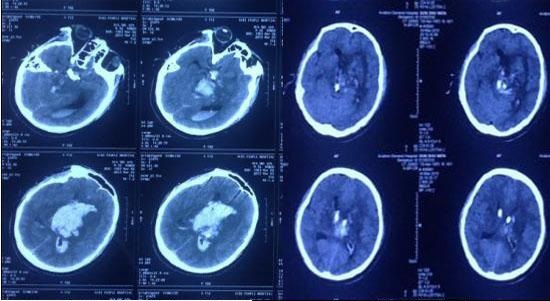 1. The pathogenesis of ventricular cast hematoma

When the body is in a state of hypertension for a long time, it will cause increased shear stress on the blood vessel wall (that is, increased friction between the blood and the vascular intima), and increased oscillating shear index (that is, the intensity and direction of blood flow in the blood vessel is unstable, resulting in more (Reflux and vortex), increased wall shear stress gradient (indicating decreased vascular compliance), faster blood flow, and wider impact on the vascular intima. Affected by hemodynamic changes, the tension of blood vessels in the brain, especially the walls of small arteries in the brain, changes, which is the basis for the formation of aneurysms. Aneurysms are common in the weakened parts of small arteries. Multiple miliary microaneurysms are more common in perforating arteries in the brain, which are saccular and usually about 500μm in diameter.

When the blood pressure suddenly rises due to emotional excitement, strenuous exercise, or irregular use of antihypertensive drugs, multiple miliary microaneurysms are very easy to rupture and hemorrhage. When rupture and hemorrhage occurs in the basal ganglia or ventricle, it will cause ventricular casting. Formation of type hematoma.

1.3 Atherosclerosis in the brain

The main pathophysiological changes of ventricular cast hematoma are the spongiform degeneration of the ventricle wall and surrounding tissues 30 minutes after the formation of the ventricular cast hematoma; the necrotic layer, hemorrhage layer, and hemorrhage layer appear in the brain parenchyma around the ventricle wall after 6-8 hours. Spongiform degeneration and edema zone.

Cerebrospinal fluid is a colorless and transparent liquid that is secreted by the choroid plexus of each ventricle, mainly from the choroid plexus of the lateral ventricle; the pressure of normal cerebrospinal fluid is maintained between 686-1765Pa (70-180mmH2O). The channels for circulating cerebrospinal fluid such as the interventricular foramen, the third ventricle, the midbrain aqueduct, and the fourth ventricle are relatively narrow. When blood enters the cerebrospinal fluid circulation system, it is easy to be blocked in the stenosis. Ventricular cast hematoma increases the contents of the cranial cavity, leading to the destruction of the stability of the cranial cavity; and the hematoma has a space-occupying effect, which can cause obstruction of stenosis in the cerebrospinal fluid circulation system, induce acute obstructive hydrocephalus, and cause rapid intracranial pressure Increased, compressing the surrounding normal brain tissue, causing a rapid decrease in cerebral perfusion pressure, which can further aggravate the ischemic and hypoxic damage of brain cells.

The intracranial pressure above the obstruction is significantly increased. When the pressure difference between the two sides of the obstruction exceeds a certain limit, the tentorium notch hernia and/or the foramen magnum hernia can be induced. Therefore, the most common direct cause of death in patients with ventricular cast hematoma is brain herniation.

(3) After the formation of ventricular cast hematoma, especially in the subacute phase (3-7 days after cerebral hemorrhage), the red blood cells in the hematoma cavity lose the protective effect of blood vessels, the red blood cells begin to lyse, and a large amount of hemoglobin and Fe3+ are released. In the formation and development of hydrocephalus after cerebral hemorrhage, Fe3+ and hemoglobin play a key role.

Studies have shown that direct injection of hemoglobin and Fe3+ into the ventricle greatly increases the probability of hydrocephalus. After hemoglobin enters the ventricular system, the complement is activated, and the expression of lipocalin 2 (LCN2) increases, which significantly increases the incidence of ventricular dilatation. A large amount of Fe3+ deposited in the ventricle after cerebral hemorrhage can activate the nuclear factor E2-related factor 2/hemooxygenase-1 (nuclear factor erythroid 2-related factor 2/hemooxygenase 1, Nrf/HO-1) pathway, resulting in iron content Increased protein expression. The study found that injection of a large amount of Fe3+ into the cerebral ventricle of rats can induce acute ventricular dilation and hydrocephalus. After 24 hours of injection of deferoxamine into the cerebral ventricle, the ventricle collapsed and the hydrocephalus was significantly improved.

(4) After the formation of ventricular cast hematoma, in order to drain the blood cerebrospinal fluid and solve the obstructive hydrocephalus, thrombolysis as soon as possible to reduce the time of blood retention in the ventricular system, tissue plasminogen activator (tissue plasminogen) is often used after surgery. activator, TPA) is perfused into the lateral ventricle of the hematoma cavity. TPA can accelerate thrombolysis, inhibit thrombosis, and inhibit ventricular expansion. However, some scholars believe that after the hematoma cavity is perfused with TPA, the hematoma dissolves faster, but it also produces a large amount of metabolites, which can cause severe inflammation.

Take 2.5cm in front of the coronal suture and 2.5cm next to the midline (side ventricle of hematoma) as the puncture point. Cut the first skin longitudinally, about 4cm in length; drill a cranial drill to make a bone window with a diameter of about 2cm, with a “cross” Cut the dura mater. Hold the ventricle puncture needle perpendicular to the direction parallel to the midline and perpendicular to the line of the external ear canal. The depth of the needle is about 5-6cm. After the hollow is felt, the needle core is pulled out, and the bloody cerebrospinal fluid flows out. Remove the puncture needle. Into the drainage tube and lead out from the side hole.

The bone window approach was adopted, and the bone window was drilled according to the method of lateral ventricle puncture and external drainage. Insert a cannula and an endoscope to the side of the intraventricular hematoma. When the endoscope enters the hematoma cavity, in order to ensure the expansion of the ventricle, the flushing channel needs to be opened, and the flushing pressure is maintained at 10-15cmH2O. Do not forcibly pull the blood clot attached to the ventricle wall To prevent secondary bleeding caused by vascular damage; if active bleeding is found in the hematoma cavity or the wall of the ventricle, bipolar coagulation can be used to stop the bleeding.

Try to remove the intraventricular hematoma without causing secondary damage. Don’t emphasize the complete removal of the hematoma at one time during the process of removing the hematoma. It can be removed multiple times and in small amounts to reduce intracranial hypertension and relieve obstructive cerebral hematoma. Water for the purpose. During the operation, care should be taken to insert the endoscope into the third ventricle under safe conditions and remove its hematoma, so as to maintain the ventricular system as unobstructed as possible. After the hematoma is removed, a drainage tube should be placed in the ventricle on the side of the hematoma, and the head CT should be reviewed within 24 hours after the operation to observe the removal of the hematoma. If there is still a large intracranial hematoma (>10mL), and may cause obstructive hydrocephalus, please refer to the method of lateral ventricle puncture and external drainage to perfuse urokinase into the hematoma cavity.

4. Evaluation and prospect of surgical methods

Ventricle cast hematoma is a kind of cerebral hemorrhage disease with high fatality rate and disability rate. Its clinical manifestations are different. In mild cases, only meningeal irritation may be manifested, such as headache and vomiting, without unconsciousness and neurological loss; With the further deterioration of the disease, severe cases may experience coma, partial neurological loss, etc. In the late stage, severe complications such as brain herniation, decerebral rigidity, and complete loss of neurological function may be life-threatening.

Simple ventricle puncture and external drainage is one of the commonly used surgical methods for the treatment of ventricular cast hematoma. Although this surgery has the advantages of less trauma and easy operation, it also has certain limitations and blindness, and cannot effectively stop bleeding. The treatment effect of patients with progressive hemorrhage is not good, and the hematoma with space-occupying effect cannot be removed as soon as possible. The hematoma lasts for a long time, and the probability of hydrocephalus is significantly increased. At the same time, the postoperative drainage tube indwelling time is too long and repeated Infusion of TPA into the hematoma cavity leads to a relatively higher probability of postoperative intracranial infection, which seriously affects the prognosis of patients. Therefore, although ventricular puncture and external drainage has achieved certain effects in the treatment of ventricular cast hematoma, the fatality rate and disability rate of patients are still high.

How to quickly, safely and effectively remove ventricular hematoma and reduce postoperative complications has become the key to effectively reducing the disability and mortality of patients with ventricular cast hematoma. With the continuous advancement of neuroendoscopy technology and the continuous improvement of neuroendoscopy equipment, neuroendoscopy-assisted ventricular hematoma removal has become an important method for the treatment of ventricular cast hematoma. Neuroendoscopy can greatly reduce the blind area of ​​the visual field during the operation, the visual field is clearer, and the scope of exposure of the hematoma is wider. It can accurately identify the ventricular wall, nerves, blood vessels, choroid plexus and other structures, and achieve the purpose of observing and removing the hematoma under close guidance. .

In addition, the placement of the drainage tube under the direct vision of the neuroendoscope can reduce the damage to the ventricular membrane due to blind placement of the tube, and can avoid the choroid plexus as much as possible, and avoid the blockage caused by the drainage tube being surrounded by the choroid plexus as much as possible. Intraoperative neuroendoscopy under direct vision is more precise and meticulous, which can avoid bleeding caused by blind puncture of lateral ventricle puncture and external drainage, and the intraoperative damage is significantly reduced, postoperative complications are significantly reduced, and the efficacy is significantly improved.

The study found that the neuroendoscope-assisted ventricular hematoma removal operation adopts a microbone window approach, which has small intraoperative damage, avoids the damage caused by large bone flap craniotomy, and has a short postoperative drainage tube indwelling time and absolute bed rest time. Short, fast recovery; and the endoscope tube has a long length and a small diameter, and it is less invasive to the brain tissue during the operation. It is suitable for intraventricular operation and can enter the contralateral ventricle through the interventricular foramen to remove hematoma.

Compared with lateral ventricle puncture and external drainage, neuroendoscopic surgery has many advantages, but due to the expensive equipment of neuroendoscopy and higher technical requirements for operators, it has not been popularized in the majority of primary hospitals, and neuroendoscopy The lateral perspective of the tube has certain limitations. There are still some blind areas of the visual field, which cannot achieve the panoramic observation of the ventricle. It is difficult to enter the third and fourth ventricles, so it is more difficult to effectively remove the hematoma. There are risks that may cause damage to the ventricle wall. Therefore, the operation skills of neuroendoscopy in the treatment of ventricular cast hematoma still need to be improved, and the equipment still needs to be further improved. The treatment of patients with ventricular cast hematoma still requires continuous in-depth research to optimize the treatment plan and improve surgical skills , And ultimately achieve the goal of improving patient survival rate and improving prognosis.