Radial scar of the breast may not need surgery

Radial scar of the breast may not need surgery.  Radial scar is a manifestation of breast X-ray. Its imaging feature is that the central transparent radial structure is twisted, and the pathological feature is that the flat duct structure with central elastic tissue degeneration is radially arranged. Many radiographic radial scars were later confirmed as pathological radial scars. Most pathological radial scars are accidentally found in mastectomy specimens. They are also often found in puncture specimens of breast X-ray calcifications and ultrasound masses, and are rarely found in puncture specimens of MRI lesions.

The team collected information about radial scars and radial sclerosis lesions from the Continuum Health Partners pathology database. From January 2007 to December 2015, a total of 1,513 pathology reports were collected. 292 cases of core needle puncture results without malignant lesions were screened out, and relevant data such as age, indications, biopsy type, puncture pathology and so on were collected. 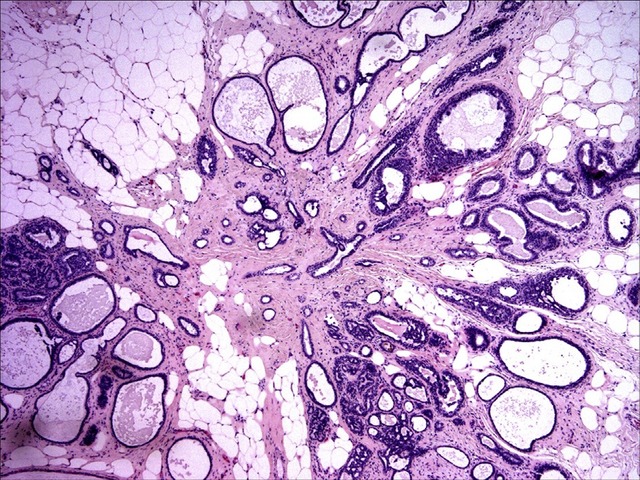 The results showed that 75% (219/292) of the patients had simple radial scars, and 74% (161/219) of these patients underwent surgical resection. Among them, only one patient progressed to ductal carcinoma in situ; in addition, 6 patients with malignant progression had atypical ductal hyperplasia (5 cases) or lobular neoplasia (1 case).

Note: For patients who progress to ductal carcinoma in situ, the lesion is 5 mm away from the radial scar biopsy gap and the size is about 2 mm. The patient’s mammogram showed residual calcification after stereotactic biopsy.

The study believes that the discovery of cancer after surgical resection of simple radial scars at the puncture site may be just an accident. Because, after scar removal, the risk of subsequent malignant tumors in patients has not increased compared with the normal population.

Moreover, previous studies have also shown that: for patients diagnosed with breast cancer and normal people, there is no difference in the proportion of patients who have a history of radial scar resection; for patients who refuse to undergo surgical treatment because of radial scars, they rarely develop For malignant tumors.

The authors of this study believe that the factors that have the greatest impact on the malignant progression of scars are whether there are proliferative lesions and the primary disease of puncture. When a subcutaneous needle biopsy finds radial scars, if there are no proliferative lesions, surgical resection is not required. Surgical resection is only suitable for patients with atypical ductal hyperplasia or lobular neoplasia.