These molecules respond to and respond to external stimuli by initiating signal transduction pathways that affect the expression of large gene families, which in turn regulate a series of important physiological processes and functions. Figure 1 below illustrates the classic way of action of GPCRs. 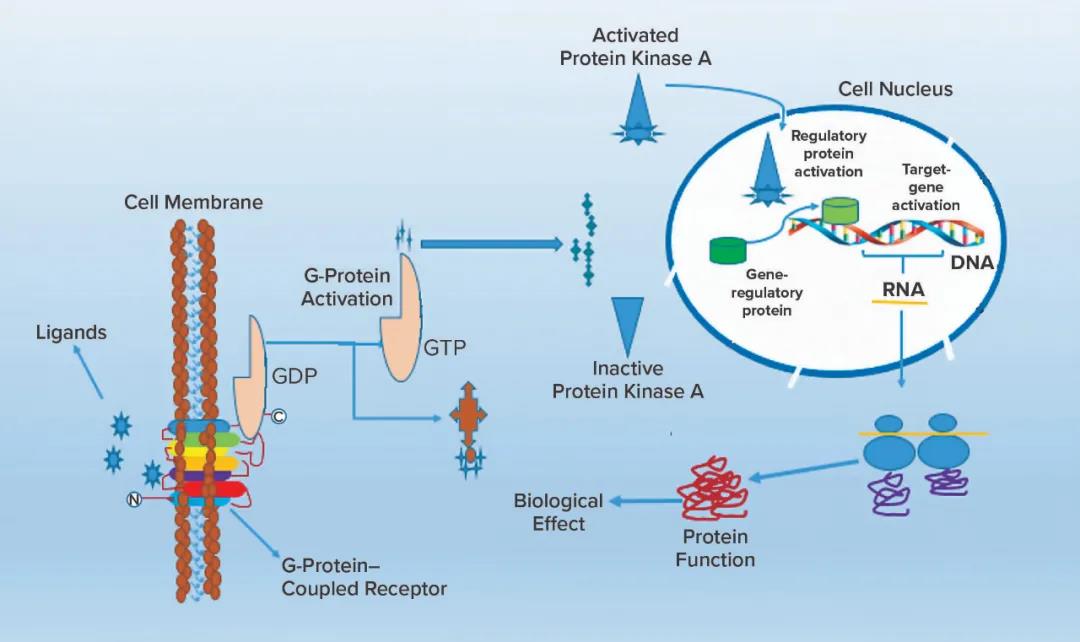 Without these proteins, humans cannot survive: for example, without β-adrenergic receptors, we cannot regulate blood sugar. Without serotonin receptors, we cannot experience happiness. Many physiological functions are related to the signaling pathways regulated by GPCRs. The dysfunction of these pathways can lead to many diseases, such as cancer, mental diseases, diabetes, cardiovascular diseases and inflammatory diseases. Therefore, whether in basic scientific research or in the pharmaceutical industry, GPCR protein is a “hot topic” of research. 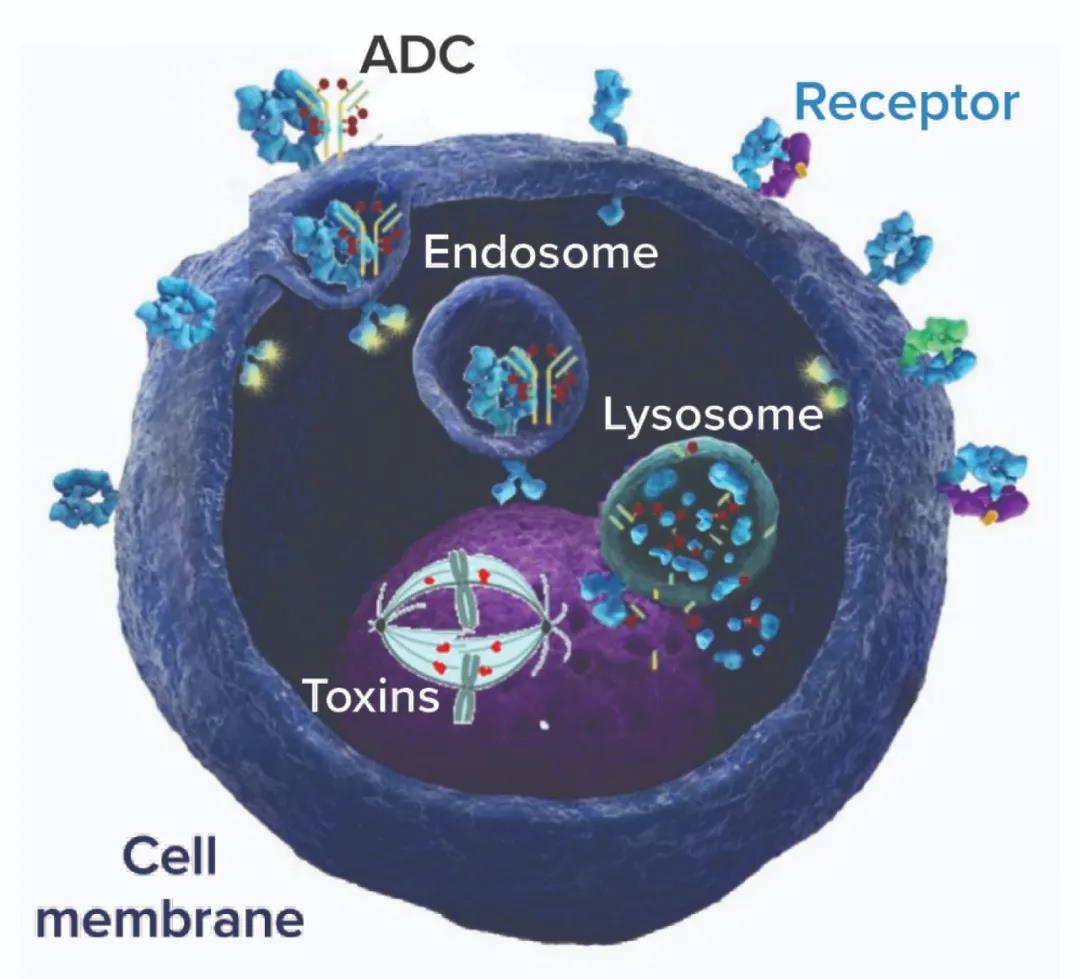 Antibody-drug conjugate (ADC) mechanism of action: ADC binds to cell surface target receptors, which are internalized to form endosomes and fuse with cell lysosomes. The drug is released from the lysosome and acts on its target (DNA or microtubules) to kill the cell.

Jiang Hualiang, director of the Shanghai Institute of Materia Medica, Chinese Academy of Sciences, said: “With GPCRs, you have the world.” So far, more than 800 members of the GPCR protein family have been identified, and the sales of drugs targeting GPCRs account for the global drug market. 27% of it. The “Sample Drugs” below lists some GPCR-related drugs that have been commercialized, some of which are prescription drugs, and others are sold in pharmacies. They have saved lives, relieved pain, and restored health for many patients.

Scientists have used X-ray crystal diffraction techniques to elucidate the atomic structure of many GPCRs, such as β2-adrenergic receptors related to cardiovascular disease and diabetes, adenosine A2A receptors for cancer immunotherapy, and immune system regulation The CCR5 chemokine receptor, P2Y1R.

Purinergic receptors related to thrombotic diseases, and D3 dopamine receptors that regulate behavior and mood. All of these are examples of important therapeutic targets for the treatment of human diseases. Their structural information provides a theoretical basis for subsequent drug development.

Data as early as 2017 showed that the U.S. Food and Drug Administration (FDA) approved a total of 475 GPCR targeted drugs, accounting for 34% of all drugs approved in the United States. Even though there are already so many such drugs on the market, drug research for new drugs targeting more members of this large protein family is becoming more and more intense.

The indications of targeted GPCR drugs have also expanded from traditional indications such as hypertension, allergies, anesthesia and schizophrenia to new areas such as Alzheimer’s disease and obesity. There are currently 321 targeted GPCRs in clinical trials, of which 66 (20%) drugs target new GPCR targets.

In addition to new GPCR targets, new methods for new and old targets are also being explored. So far, most drugs targeting GPCR molecules are small molecules and low molecular weight peptides. However, monoclonal antibody (MAb) drugs have many advantages over small molecules and peptides, especially for oncology and immunological indications. The advantages of targeted GPCRs include:

A total of 57 monoclonal antibodies are in the stage of discovery and preclinical research, of which 39 have entered clinical research. Table 2 below lists some of them. Three such monoclonal antibodies have been approved: galcanezumab (Eli Lilly), eptinezumab (Lundbeck) and fremanezumab (Teva), all of which target the GCPR ligand calcitonin gene-related peptide (CGRP) rather than the receptor itself. The fourth approved drug erenumab (Amgen and Novartis) targets the CGRP receptor (CGRPR).

The picture is shown in Table 1 below. Antibodies against GPCRs achieve their therapeutic functions through two main mechanisms of action (MoAs). One is to prevent the GPCR from binding to its ligand, thereby preventing disease-causing signal transduction. Erenumab is a good example. Both CGRP and CGRPR play an indispensable role in the pathophysiology of migraine.

Another type of MoA is antibody-mediated killing of cells expressing a given receptor through a so-called effector function. For example, mogamulizumab (Kyowa Hakko Kirin) is specifically designed to show enhanced ADCC activity on cancer cells expressing CCR4. Because GPCRs are widely expressed, and because proteins mediate many functions, antibodies against GPCRs are often explored for a variety of even seemingly unrelated indications. For example, CytoDyn recently announced that leronlimab, a human immunodeficiency virus (HIV) entry inhibitor against CCR5, also shows promise to alleviate the cytokine storm of COVID-19 and will test it in a phase 2b-3 trial.

Although monoclonal antibodies can kill cancer cells that overexpress the antigen bound to them through effector functions, they can be further enhanced by attaching potent toxins to traditional antibody drugs to form antibody-drug conjugates (ADC). Kind of killing effect. After ADC binds to the target tumor cell, it will be internalized, and then the combined powerful chemical toxin will be released to kill the cell. Figure 1 illustrates this MoA. At the same time, normal cells that express little or no such antigens are spared. Therefore, ADC is becoming more and more favored by researchers, and it has set off a global R&D boom.

The development of ADC has gone through a long and arduous process for more than 20 years. There have been many successes and failures along the way, and many things have been learned through technological innovation and progress. Since ADC is composed of three parts: antibody, toxin and linking molecule connecting the two, compared with conventional antibodies and other recombinant proteins, its development, production and testing process is more complicated. However, 8 ADCs have been approved by the FDA (Table 2 above), and half of them were in the past year. The research and development of ADC is very active even outside the field of oncology, so far, approvals in eight fields have existed.

Although GPCRs represent the largest family of protein targets for approved drugs, they have not been widely used as cancer therapeutic targets except for certain endocrine and hormone-responsive tumors. At the same time, even though tremendous progress has been made, the demand for the development of new therapies for cancer treatment is increasing. As people further understand the expression, structure and function of GPCRs in cancer, new therapies for GPCRs will emerge.

GPCRs with increased expression in cancer cells should be particularly attractive as ADC targets. In fact, most GPCRs cause conformational changes after binding to ligands or agonist antibodies, leading to internalization of cells. The rapid internalization of GPCRs is a key feature for turning them into effective ADC drug targets. Fluorescence automated cell sorting (FACS) screens can help scientists discover antibodies with this agonist characteristic, which may be candidates for ADC. In addition, certain tumor cells highly express mutated GPCRs, such as those lacking one or two transmembrane domains. If antibodies specific for such mutant GPCRs can be isolated, they may develop into effective ADC drug candidates, thereby avoiding normal cells expressing normal corresponding proteins.

LGR5 is the first member of the GPCR family to be targeted by ADC, which proves effective tumor efficacy and safety in vivo. In addition, the ADC reduces the size and spread of tumors, and provides improved survival rates in genetic engineering models of intestinal tumorigenesis. The developers hope that clinical trials can further prove its prospects in the near future.

DS-6157 is a “first-in-class” ADC drug targeting GPR20, an isolated GPCR specifically expressed in gastrointestinal stromal tumors (GIST). DS-6157 has a different MoA from TKI and can be used to treat GIST patients who are resistant to TKI treatment. DS-6157 is currently undergoing phase 1 clinical trials.

LegoChem Biosciences (LCB) selected three strategic GPCRs as drug targets. LCB’s technology is based on a site-specific and plasma-stable ADC platform that uses a shorter extra amino acid (CAAX) sequence to create a site-specific binding site at the end of the antibody chain. The prenyl transferase attaches the isoprene substrate to the cysteine ​​residue of the CAAX sequence, creating a binding site to which the linker attaches. Through CAAX-mediated allylation, the site of drug binding and the number of drugs bound to the antibody can be precisely controlled, so that developers can obtain ADC molecules with a specifically defined drug-to-antibody ratio (DAR). Sorrento Therapeutics has developed three GPCRs using this novel ADC format, which target CCR2, CXCR3 and CXCR5.

The development of GPCR as an ADC target will face many challenges. In addition to the unique characteristics of GADC as seven transmembrane glycoproteins, it also faces the overall challenge of developing ADC as a therapeutic agent. Obtaining specific and high-affinity antibodies for GPCRs is more difficult because they are insoluble under ordinary conditions and there are only a limited number of extracellular epitopes for which antibodies can be evaluated.

However, some companies are developing innovative strategies to screen for antibodies specific to GPCRs. Newer ADC technology platforms and successful clinical experience in ADC development will enable these companies to overcome related challenges. As shown in Table 2, many companies are developing the ADC format as an improved cancer treatment drug. Monoclonal antibodies with agonist properties should be more effective than other antibodies used in the ADC format. We hope that in the future there will be more ADCs targeting GPCRs to treat cancer and other life-threatening diseases.