In order to improve specificity and effectiveness, most of these small molecules do not follow the Lipinski Five Rule (Ro5).

They have a molecular weight of more than 500 Da and have more hydrogen bond donors and acceptors than traditional small molecules. Therefore, they are more effective, but their permeability, solubility and metabolic clearance rate will be negatively affected.

Nevertheless, it is speculated that high efficiency and specificity may make up for the poor bioavailability and converge to a reasonable oral dose.

They use the ubiquitin-proteasome system (UPS) to degrade disease-related intracellular proteins, which is a new strategy to break through traditional non-drug targets.

Arvinas is a pioneer in this field. Two oral PROTACs (ARV-110 and ARV-471) respectively target the androgen receptor in prostate cancer and the estrogen receptor in breast cancer, and have entered clinical studies since 2019. 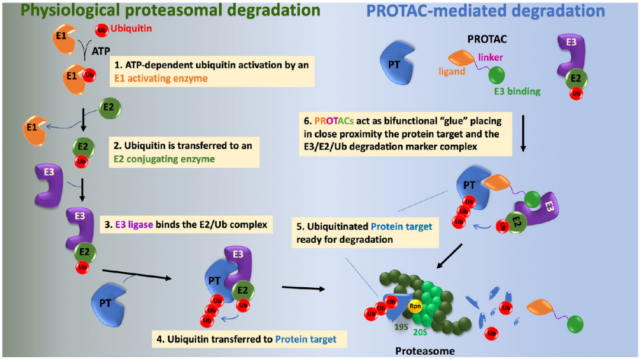 Monoclonal antibodies (mAbs) have become the emerging main force in oncology treatment due to their high affinity and specificity.

Since the CD3 mouse-derived monoclonal antibody was approved in 1986, about 100 antibody drugs have been approved for marketing. In the past five years, PD-1/PD-L1, CD38, CD19, etc. have been hot targets for the approval of anti-tumor drugs. 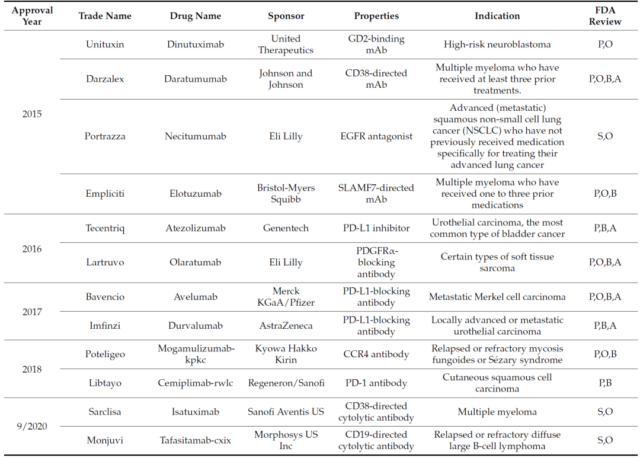 Antibody-drug conjugates (ADC) use the specificity of antibodies to target cytotoxic drugs to the tumor.

Reduce the off tumor toxicity of small molecule drugs. The advancement of antibody engineering and the maturity of site-specific coupling technology have improved the effectiveness and stability of payloads and antibodies.

More than 60 drugs have entered the clinical stage, 11 have been approved for marketing, and about half of them will be launched in 2019 and 2020. 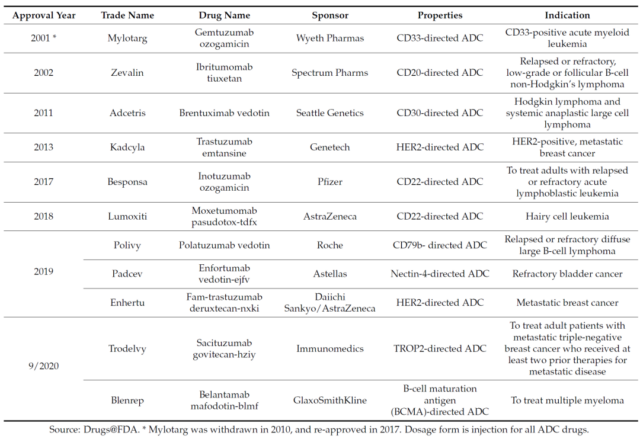 Bispecific antibodies (bsAbs) can recognize two targets or two epitopes of one target and induce changes in cell signals.

As an effective strategy to overcome single-target drug resistance in tumors, it has received widespread attention. There are about 100 molecules in different stages of the clinic around the world.

Currently, only two anti-tumor antibodies have been approved, Removab (Catumaxomab) and Blincyto (blinatumomab).

It is worth noting that oligonucleotide therapy is classified as a new type of drug, managed by the FDA Center for Drug Evaluation and Research (CDER), while cell and gene therapy products (based on viral vectors and gene editing therapies) are classified as “vaccine , Blood and biological agents”, managed by the FDA Center for Biologics Evaluation and Research (CBER).

Immune cells can be proliferated and/or genetically engineered before transplantation plans to enhance their anti-tumor ability.

There are more than 1,400 live-cell drugs in the global cancer treatment pipeline. CD19 and BCMA are still the highest priority targets for cell therapy.

Approximately 23 active CAR-T studies have entered the third phase, focusing on non-solid tumors, such as multiple myeloma and lymphoma, and five cell-based therapies for cancer have been approved. 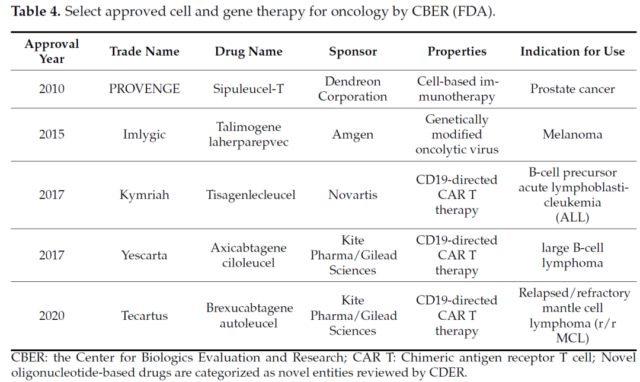 Gene therapy is defined as genetic engineering therapy through the use of viral vectors. There are currently two FDA-approved gene therapies based on adeno-associated virus (AAV).

They can directly target RNA parts in the cytoplasm, ribosomes or proteins in the cytoplasm. So far, the top ten oligonucleotide-based drugs have been approved by the FDA, including ASO, aptamers and siRNA.

Because ONs have large molecular weight and negative charge, cell absorption and drug delivery are both challenges. People use chemical modification (such as phosphorothioate linkage and 2′-O-methyl substitution) and systemic administration (lipid nanoparticles and liposomes). There are no oligonucleotide drugs approved for cancer treatment.

RNA editing has not been tested in humans, and it may provide a safer method, because transient and reversible editing of RNA is safer. CRISPR-Cas9-mediated RNA allows precise and effective targeting of DNA. However, it is still challenging to deliver Cas9 protein, mRNA, and short guide RNA to target cells.

The combination of CRISPR/Cas9 technology and CAR-T began testing. T cells were extracted from two patients (one with multiple myeloma and one with sarcoma), and in vitro gene editing was performed to disable the PD-1 gene. The edited T cells were reinjected into the patients, and neither of these patients had recurrence of the disease within 9 months after treatment. There are now more than 20 clinical registrations of CRISPR/Cas.

Over the past five years, anti-cancer drugs have achieved rapid development.