The role of HBV core protein mutation in occult HBV infection.  Occult hepatitis B virus infection (OBI) refers to the patient’s serum HBsAg negative and liver tissue HBV DNA positive (with or without serum HBV DNA positive). If the HBV replicates at a low level in OBI patients, the HBV DNA in the serum may be positive, but often <200IU/ml. OBI can not only spread HBV through blood transfusion, organ transplantation, and dialysis, but it is also closely related to the occurrence of liver cirrhosis and hepatocellular carcinoma.

HBV core protein has multiple functions, and plays an important role in the encapsidation of pgRNA and pol polymerase, the dissociation and polymerization of nucleocapsid, and the maturation of virus particles. The occurrence of OBI is closely related to the mutation of HBV gene. Existing research mainly focuses on the mutation of HBV’s S region and BCP region. The mechanism of hepatitis B virus core protein (Cp) mutation in the occurrence and development of OBI is still Not sure. In this study, the biological characteristics of Cp of OBI strains and wild strains were studied through cell and animal experiments. 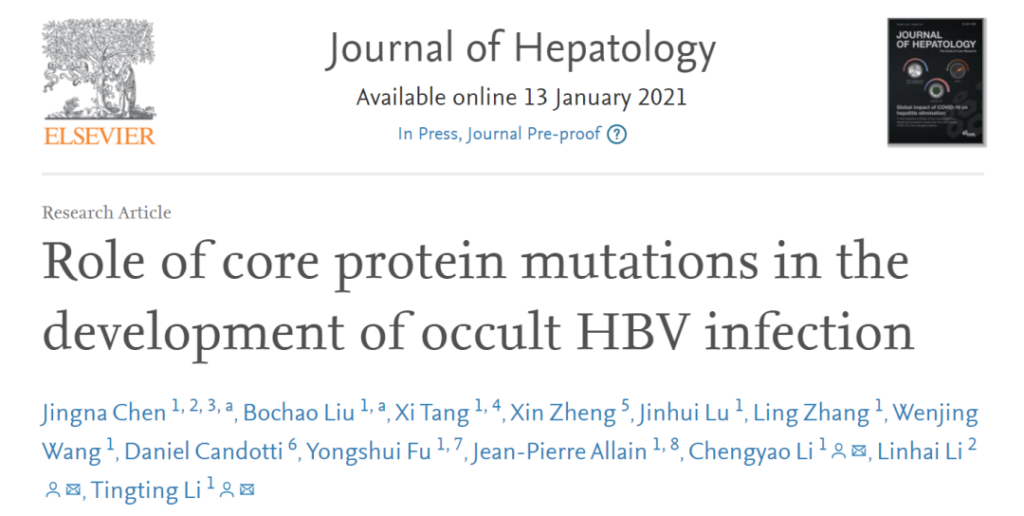 Supplemental Table S3. The frequency of individual site mutations among 26 Cp sequences of genotype B OBI strains from blood donors 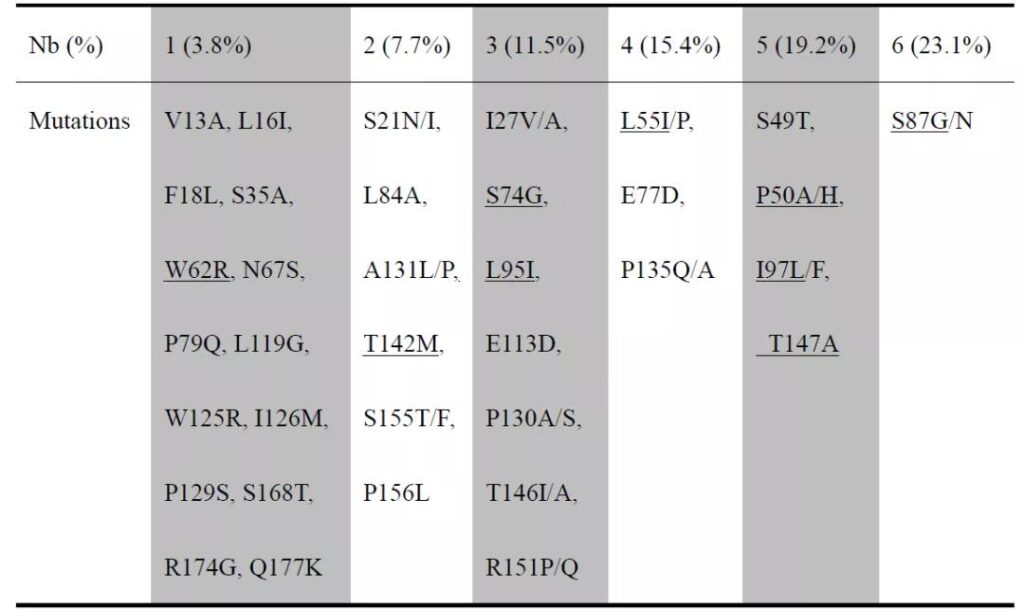 The mutations underlined were found in SZA and SZB strains.

The Cp of OBI strains SZA, SZB and wild strain wt was constructed into pcDNA3.1 vector containing HA tag. The results of in vitro transfection experiments showed that the HA-HBcAg expression level of SZA was lower than that of SZB and wt (Figure 1A) .

Then the wild-type Cp fragment of the pHBV1.3-wt (genotype B) plasmid was replaced with the Cp fragment of SZA and transfected into Huh7 cells. Southern blot showed that the level of the replication intermediate HBV single-stranded DNA (ssDNA) of SZA was lower than that of wt Level (Figure 1B), indicating that the Cp mutation of SZA affects the level of virus replication.

In terms of viral protein expression, there was no difference in the expression of intracellular and extracellular HBsAg between the two (Figure 1C), but the HBeAg expression level of SZA was significantly lower than that of wt (Figure 1D).

Cellular immunofluorescence detection of monoclonal and polyclonal anti-HBc antibodies showed that the HBcAg of SZA in Huh7 cells is distributed in the cytoplasm and nucleus, showing a coarse granular shape; the HBcAg of wt is distributed in the cytoplasm, showing a fine granular shape (Figure 1E and 1F). Quantitative RT-qPCR results showed that the intracellular and extracellular 3.5kb RNA levels of SZA were lower than those of wt (Figures 1G and 1H), indicating that the SZA Cp mutation down-regulated the transcription levels of HBeAg and HBcAg. 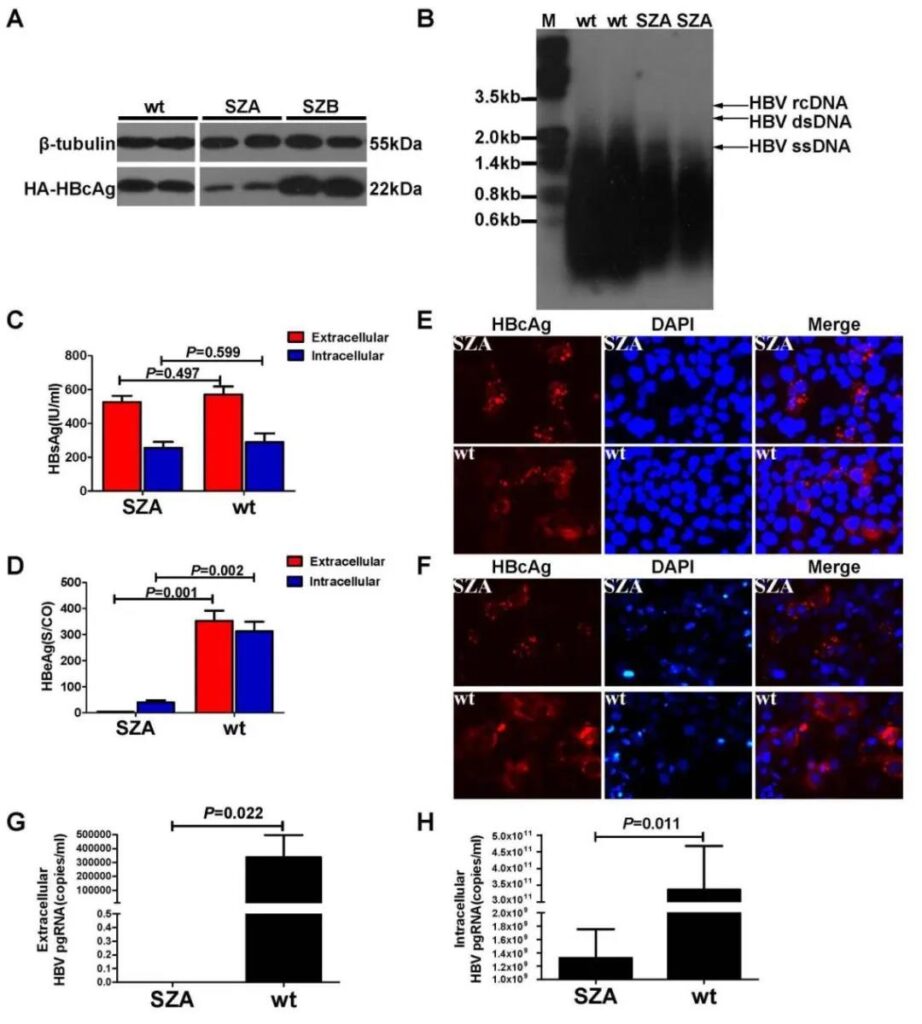 In Balb/c mice, the liver tissues of mice injected with SZA never expressed HBcAg in the first and seventh weeks after the hydrodynamic injection of pHBV-1.3-SZA and pHBV-1.3-wt plasmids into the tail vein. The wt mice expressed HBcAg in the liver at the first week after injection, and the expression level increased significantly at the seventh week, and the expression of HBcAg in the hepatocyte nucleus was stronger than that in the cytoplasm (Figure 1A). 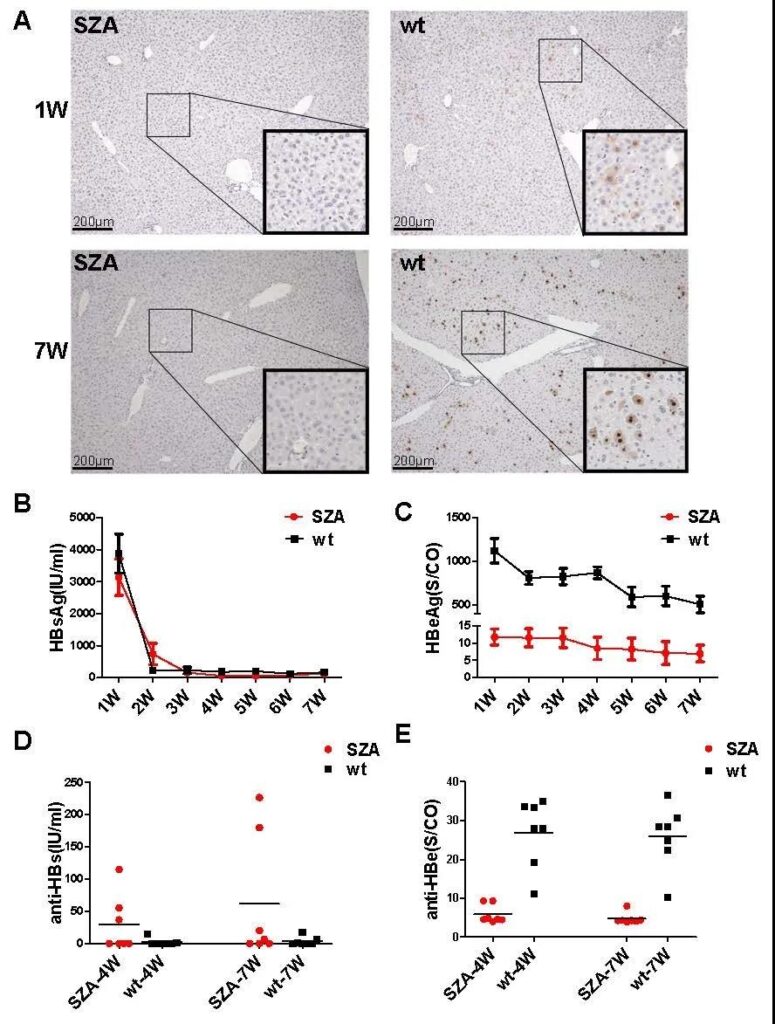 04   Expression of plasmids with different mutation sites in Huh7 cells

The results of the pHBV3.1+-HA plasmid transfection experiment based on the mutation and reversion of different sites in the Huh7 cell line showed that the mutations at the three sites of P50H/W62R/S74G affect the expression level of HBcAg (Figure 3). The results of pHBV-1.3 plasmid transfection experiments with different mutation sites showed that W62R combined with P50H mutation affects the distribution type of HBcAg in hepatocytes in vitro (Figure 4).

In addition, after 72 hours of transfection of pHBV-1.3 plasmids with different mutation sites into Huh7 cells, HBsAg could be detected both in the cytoplasm and in the cytoplasm, and the difference was not statistically significant (Figure 5A). The wild strain wt P50H, W62R single point mutations and double mutations, and P50H/W62R/S87G triple mutations can reduce HBeAg levels (Figure 5B).

Fig. 3. Expression of HBcAg in pcDNA3.1-SZA Cp reparation 704 or pcDNA3.1-wt Cp mutation constructs transfected in Huh7 cells.
After transfection for 48h with pcDNA3.1 Cp expressing constructs carrying individual aa reparation or substitution (Table 1), the cells were collected and lysed for detection of HBcAg fused with HA tag by Western blot using a monoclonal antibody. Beta-tubulin was used as control. The left of arrow indicates SZA Cp mutant and its individual aa reparation; the right of arrow indicates wt Cp and its individual mutants. 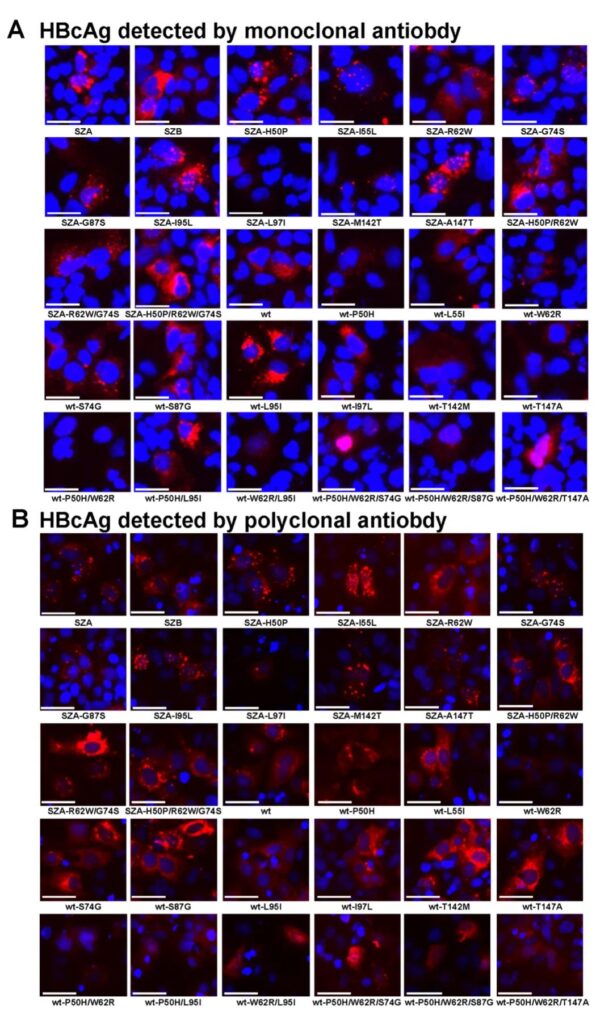 Fig. 4. Functional study of Cp aa substitution impact on HBcAg expression in vitro by pHBV1.3-SZA Cp mutant and its reparation or pHBV1.3-wt Cp and its mutation replicons transfected in Huh7 cells. (A) Detection of HBcAg at 48h by pHBV1.3-SZA Cp mutant and its reparation replicons (14 images from SZA to SZA-H50P/R62W/G74S) or by wt Cp and its generated mutant replicons (16 images from wt to wt-P50H/W62R/T147A) in infected cells by IFS with monoclonal antibody or (B) with polyclonal antibody to HBcAg, respectively. The nucleus of cells was stained with DAPI. Magnification, x 100. 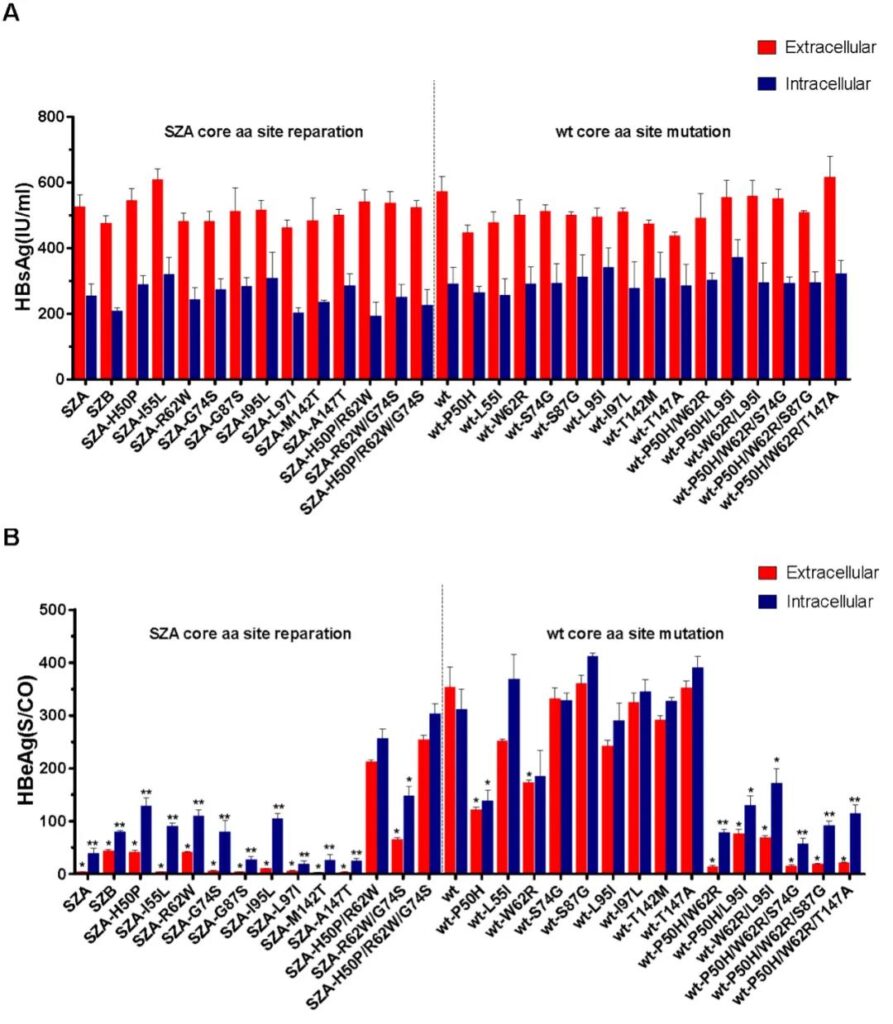 Fig. 5. Impact of Cp aa substitution on HBsAg and HBeAg production in vitro in individual pHBV1.3-SZA Cp mutant and its reparation or pHBV1.3-wt Cp and its mutation replicons transfected in Huh7 cells. Detection of extracellular and intracellular levels of HBsAg and (B) HBeAg from pHBV1.3-SZA Cp repaired mutants or pHBV1.3-wt Cp generated mutants in infected Huh7 cells. Data are presented as mean value ± SD of triplicates of transfected cells. The level of HBsAg or HBeAg was compared between mutated/repaired mutant and wt replicon transfected cells, respectively. The statistical significance of reduction or restoration is calculated using the two-tailed, independent-samples t test. ＊, P <0.05; ＊＊, P <0.01; ＊＊＊, P <0.001.

05  Expression of plasmids with different mutation sites in mice

In this paper, a sequence alignment of the Cp of 26 OBI blood donors found that one of the OBI blood donors had two Cp strains (SZA and SZB). Subsequent cell and animal experiments showed that the W62R mutation of Cp may change the nucleocapsid structure of the virus, thereby affecting the core protein expression, polymerization, and pgRNA packaging and distribution during HBV replication. The W62R, P50H/W62R, P50H/W62R/S74G mutations of OBI strain SZA Cp lead to low expression levels of HBcAg and HBeAg, which may be closely related to the formation of OBI.