Research progress of transparent septum and related diseases.   The transparent septum is a vertical membranous structure located in front of the midline of the brain. It has no nerve function. Due to the low incidence of lesions in this area, the existence of this structure and its related lesions rarely cause neurologists to pay enough attention. 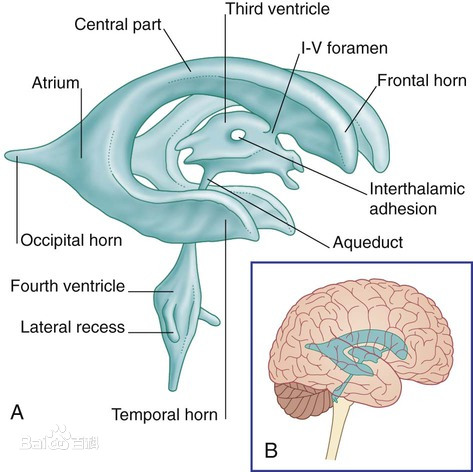 The function of the transparent septum is not yet clear, but it may play an important role in the limbic system, and the relationship between its pathology and related mental disorders is also worthy of further study.

Based on the anatomical and developmental characteristics of the transparent septum, this article reviews some clinical features and treatment methods of related common diseases, and discusses the relationship between it and mental disorders.

The transparent septum is a thin film composed of white matter fibers and a few neuronal tissues on the midline of the brain. It is located between the anterior horns of the two lateral ventricles and forms its inner wall. It extends in parallel to the interventricular foramen and separates the two lateral ventricles. open. The transparent septum is approximately triangular on the sagittal plane. The front and lower parts are the knees and mouth of the corpus callosum, the posterior and lower parts are the dome column, and the upper part is connected with the lower surface of the corpus callosum. The normal thickness of the transparent septum is 1~3mm. Its blood supply originates from the branch of the medial striatal artery of the anterior cerebral artery. Three septal veins run along the surface, and then cross the fornix column to enter the internal cerebral vein.

2.1 Transparent septum and its associated deformities

The incidence of hyaline septum is 2~3/100,000. It is rare if it is simply absent. It is often accompanied by abnormal development of the forebrain and midline structure, such as dysplasia of the corpus callosum, dysplasia of the optic septum, and cleft brain malformation. Most of these lesions are Fatal or severe non-fatal central nervous system malformations. Therefore, it is very important to detect the absence of fetal transparent septum by prenatal ultrasound, which is of great significance for judging the abnormality of the fetal intracranial structure and timely termination of pregnancy.

The fluid in the cavity is formed by filtration through the diaphragm on both sides, and reabsorbed by the diaphragm vein and capillaries, and does not participate in the circulation of cerebrospinal fluid.

In general, the lesions that cause hydrocephalus or nerve compression with obvious symptoms and clear imaging diagnosis of lucid septal cysts should be treated with surgery, but there are also reports that hyaline septal cysts can be relieved by conservative treatment. Symptoms related to hyaline septum cysts (such as headaches, mental disorders, etc.) are non-specific.

Central neurocytoma is the most common primary tumor. It has a high incidence in young people. It usually occurs in the transparent compartment near the interventricular foramen. It grows mainly from one side to the opposite side, and it often manifests as a broad base and lateral A mass connected to the hyaline septum of the ventricle with varying degrees of hydrocephalus generally has a good prognosis. In the 2016 WHO classification of the central nervous system, it was classified as neuron and mixed neuron-glial tumors, but the central nervous system Whether the cell tumor originated from the hyaline septum tissue or the neuronal tissue in the lateral ventricle is still unclear. In addition, there are subependymal giant cell astrocytoma and subependymoma in primary tumors. Among the secondary tumors, glioblastoma derived from the corpus callosum and primary central nervous system lymphoma are common; in addition, rare cases such as germ cell tumors and metastatic melanoma have also been reported.

Tumors that occur in the transparent septum are difficult to detect early. When the patient has obvious symptoms of increased intracranial pressure such as headache and vomiting, the tumor volume is often already very large. Like most intracranial tumors, surgery can clarify the nature of the disease and relieve it. Symptoms of increased intracranial pressure can improve the prognosis of patients. Sometimes patients may be accompanied by emotional or mental disorders in the early stage, but whether these symptoms are related to the pathology of the transparent septum structure itself is not yet clear.

The clinical symptoms caused by hyaline septal lesions, such as headache, decreased vision, etc., can be explained by imaging to suggest hydrocephalus or visual path compression, but the relationship between it and mental disorders has always been clinically significant. dispute. As tumor lesions in the lucid septum usually have damage to the surrounding structures (including the corpus callosum and vault, etc.), the lucid septum is generally associated with the developmental abnormalities of other structures in the forebrain or midline. At present, the gap between lucid septal lesions and mental disorders Most of the research focuses on the transparent compartment cavity (including transparent septal cyst, collectively referred to as the transparent compartment cavity below) population.

Transparent compartments can appear in depression, affective psychosis, schizophrenia and other mental disorders. SARWAR’s research on the embryology of the transparent septum and its fibrous connection believes that the septum is an important relay station between the hippocampus and the hypothalamus, and is a part of the limbic system. ALDRENTURNER believes that the transparent septum can be regarded as a relevant center that transmits visceral information to the hippocampus, amygdala, habenula, and brainstem network through the hypothalamic autonomic nervous system, and participates in consciousness, sleep processes and emotional responses.

Taking into account the functions of the limbic system in affective behavior, intentional instincts, and learning and memory, the appearance of the transparent compartment seems to partially explain some of the patients’ symptoms of mental disorders. However, the pathogenesis of schizophrenia has not yet been elucidated, and there is still considerable controversy as to whether it is a functional disease or an organic disease. Some studies believe that the incidence of transparent compartments in patients with schizophrenia is higher than that of the normal population, especially the large transparent compartments (the distance between the two side walls is greater than 6mm) may be the developmental abnormality of the limbic system of schizophrenia. A performance.

In 2018, the author’s department performed neuroendoscopic fenestration on a female hyaline septum cyst with a significant depression (but no diagnosis of depression-related mental illness). After the operation, the depression of the patient was significantly relieved. In the following year During the follow-up, the patient’s family also reflected that the patient’s personality gradually became cheerful and optimistic after the operation. It is reported in the literature that a case of male hyaline septum cyst with memory loss and cognitive impairment has been significantly relieved after neuroendoscopic fenestration.

Can these cases suggest that the psychiatric symptoms caused by a hyaline septum cyst may simply be due to the pressure of the hyaline septum cyst itself on its surrounding structures (such as the corpus callosum, fornix, hypothalamus, etc.), because surgery cannot change the developmental abnormalities that exist in other brain structures. The dysplasia of the transparent septum and its related diseases are still relatively blank areas in clinical research.