NEJM: Cancer can be transmitted from mother to child

NEJM: Cancer can be transmitted from mother to child.   Before these infectious cancers attracted attention, the first known to the world was the canine infectious venereal disease tumor, which can spread among dogs through sex.

Since the twentieth century, cancer has long been a scary demon.

The vast majority of cancers are caused by factors such as the accumulation of genetic mutations in the body, the inheritance of genetic factors, and exposure to carcinogens. But there is such a rare form of cancer that all parents are worried about, and that is the “mother-to-child transmission” of cancer.

On January 7, 2021, Chitose Ogawa from the National Cancer Center of Japan led a team to publish a paper on NEJM entitled “Vaginal Transmission of Cancer from Mothers with Cervical Cancer to Infants” [1], reporting two rare cancers The situation of mother-to-child transmission provides precious data for this little-known way of cancer transmission.

“Mother-to-child transmission” is an extremely rare form of cancer. This occurs in every 500,000 mothers with cancer. In every 1,000 pregnant women, only one mother has cancer, so this happens. The probability is extremely low.

Before this study, only 18 cases of mother-to-child transmission of cancer had been reported in the world. The research team conducted a detailed combing in this paper. 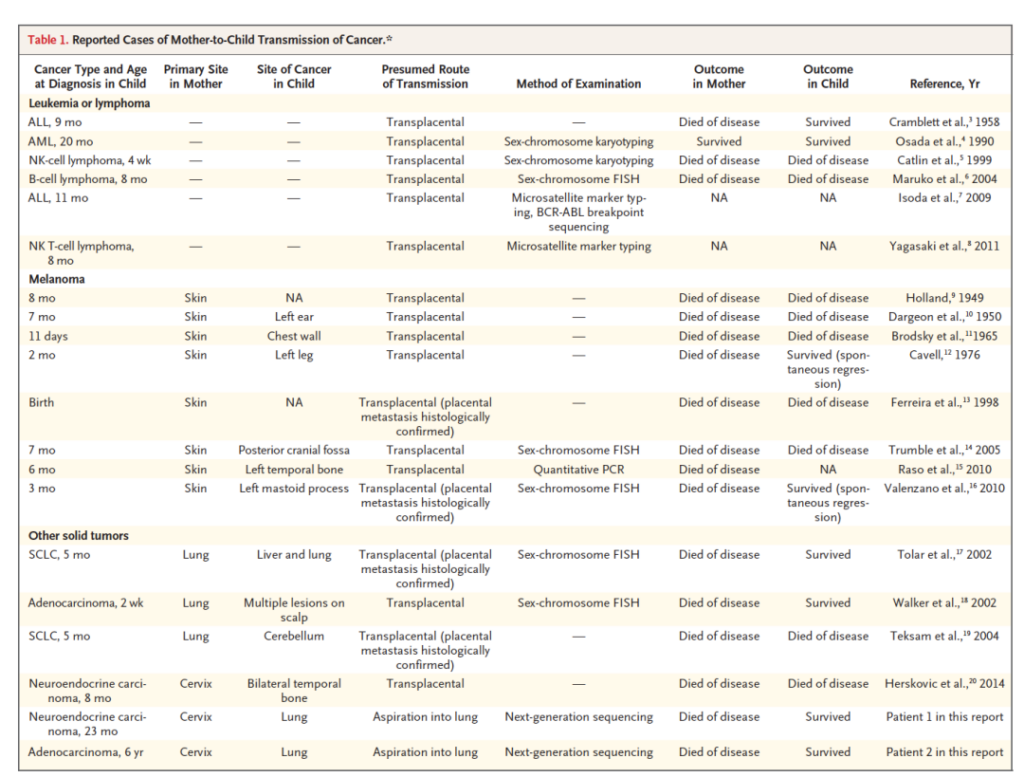 In the previous reports of mother-to-child transmission of cancer, melanoma is the most common in mothers, followed by leukemia and lymphoma. Most of these cancers are because tumor cells have metastasized across the placenta and then enter the fetus. However, the author believes that there is such a special situation: during the delivery process of a mother suffering from cervical cancer, cervical cancer cells may fall off into the fluid in the birth canal, and the fetus may inhale these cancer cells into the lungs and eventually cause Lung cancer. However, so far, there has not been any report on this mode of transmission. 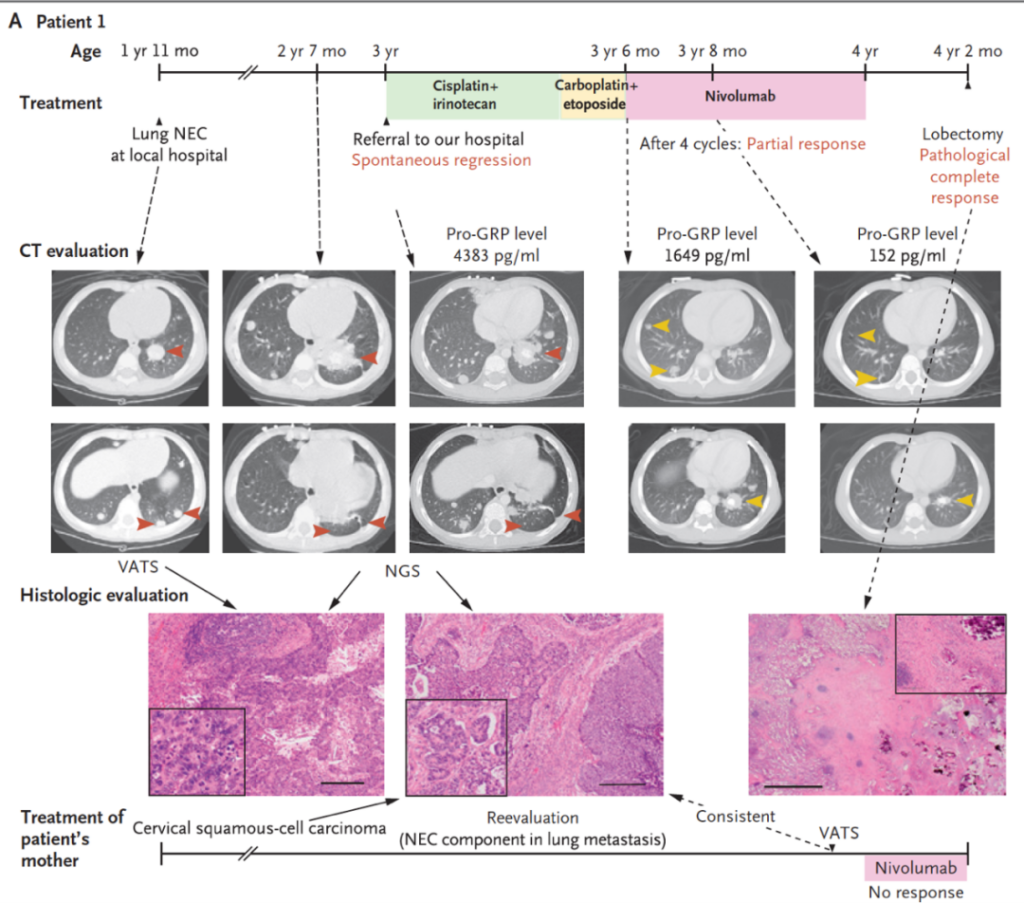 In this study, a 23-month-old baby with severe pulmonary symptoms was admitted to a local hospital in Japan. The CT results showed that there were multiple lungs in this small life less than 2 years old. It may be the shadow of the tumor. Puncture omics results confirmed that these shadows are neuroendocrine tumors. At the same time, the research team detected tumor cells with similar characteristics in the cervix of the baby’s mother. 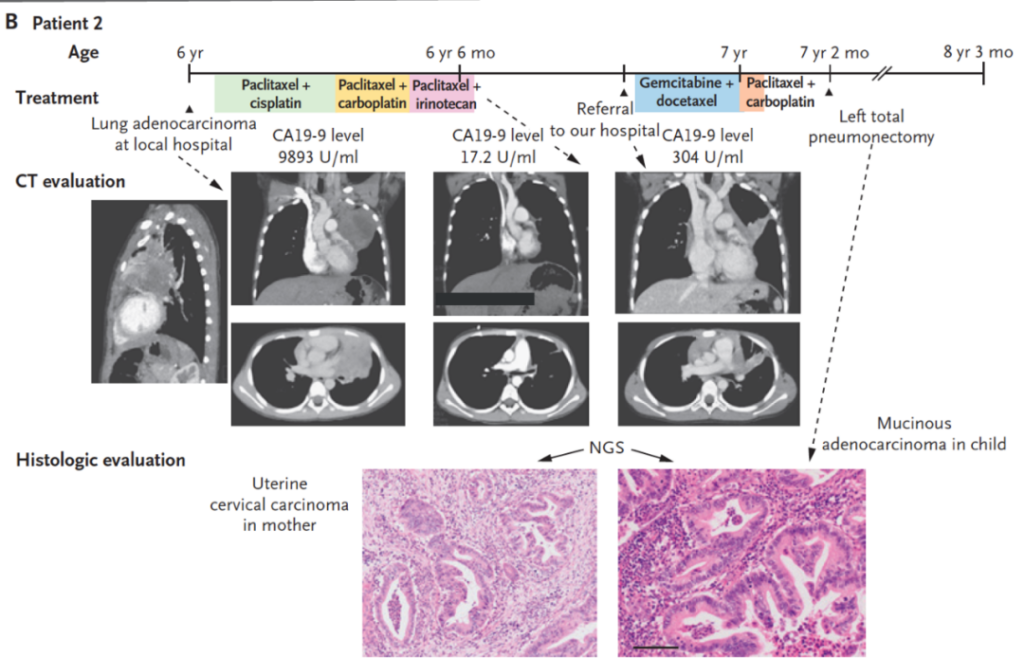 Another reported case is a 6-year-old child. The child went to the doctor after experiencing pain in his left chest, and the CT result found a shocking tumor with a diameter of 6 cm in the child’s left lung. The tumor was eventually diagnosed as mucinous adenocarcinoma.

The child’s mother was diagnosed with cervical cancer during pregnancy, but because no cells were detected in the cervical cell analysis, the tumor was stable. Therefore, the mother decided to continue giving birth and the child was born at term. The mother was classified as cervical adenocarcinoma by puncture testing after childbirth, and died 2 years later. The child was also diagnosed with lung cancer 4 years after his mother’s death. Fortunately, after many rounds of chemotherapy and lung resection, the child has got rid of the trouble of cancer. His lung tumors are far away from the primary lung cancer in morphology, but are very similar to the mother’s cervical adenocarcinoma.

Due to the special circumstances of these two cases, and the child’s tumor cells are highly overlapped with the mother’s cervical cancer, the author believes that the child’s lung cancer was transmitted through mother-to-child transmission. 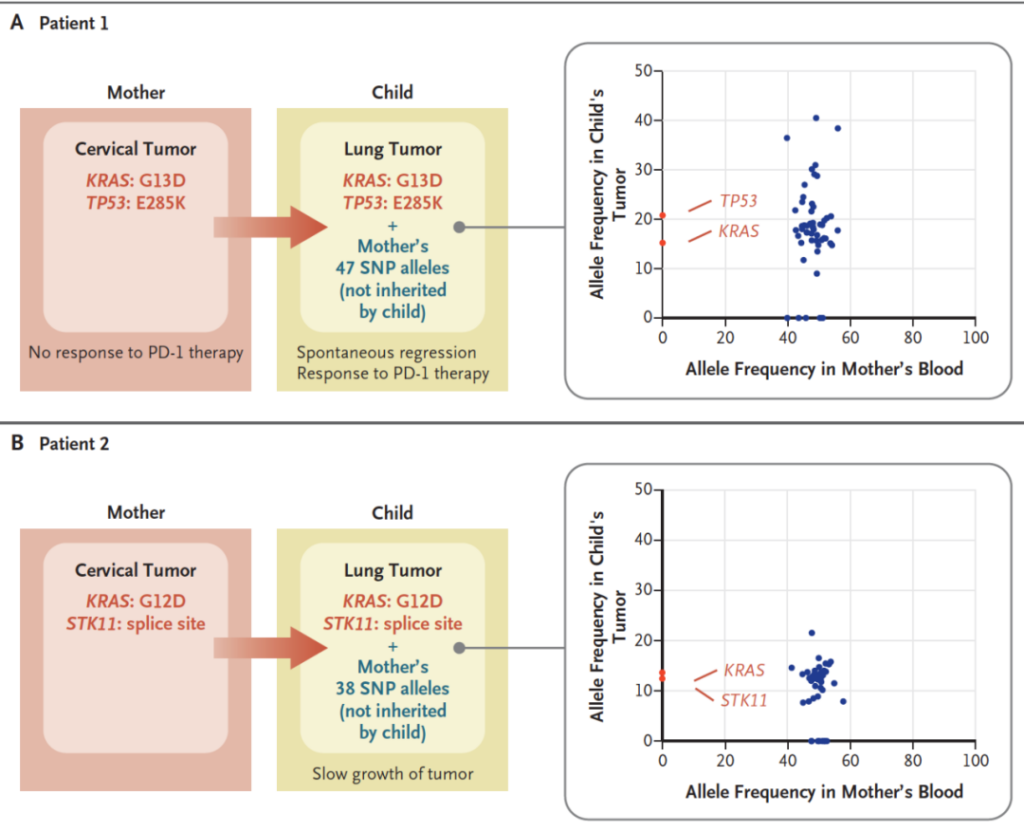 After sequencing the tumors of two pairs of mother and child, the researchers found that the genetic characteristics of the mother and child’s tumors were highly similar, and that a large number of gene mutations in the child’s tumor were different from those in the child’s normal tissues. In the second child’s tumor, the same HPV16 as in her mother’s tumor was detected. More importantly, there is no Y chromosome in the child’s tumor cells. These data means that the children themselves do not carry these oncogenes and carcinogenic factors, and the cancer is directly obtained from the mother’s cervical cancer. These are two cases of mother-to-child transmission of cervical cancer.

This case report is the 19th and 20th case of human cancer “mother-to-child transmission” supported by direct evidence in medical history. The author proves the child’s lung cancer cells and the mother’s cervical cancer from multiple dimensions such as morphology and genome. The same cells provide solid clinical data for infants to develop “mother-to-child transmission” cancer through inhalation of shed cervical cancer cells.

In fact, cancers caused by microbial infections are more suitable for the term “infectious cancer.” Helicobacter pylori, which causes cancer of the digestive tract, and HPV, which causes cervical cancer, are both “spreaders” of cancer.

But in recent years, more and more data have shown that for some cancers in nature, the cancer cells themselves have the ability to infect.

On December 11, 2020, Professor Andrew Storfer from the University of Washington led the team to publish a study on Science titled “A transmissible cancer shifts from emergence to endemism in Tasmanian devils” [2], making Tasmanian devil facial tumors such Infectious tumors have re-entered the public’s field of vision.

It is also an animal. In 2015, the Howard Hughes Medical Institute Stephen P. Goff team published a paper entitled Horizontal Transmission of Clonal Cancer Cells Causes Leukemia in Soft-Shell Clams [3], which reported that leukemia in soft-shell clams The horizontal spread of snails led to the destruction of some soft-shelled clams on the east coast of North America.

Before these infectious cancers attracted attention, the first known to the world was the canine infectious venereal disease tumor, which can spread among dogs through sex.

These studies have shown that, in nature, infectious cancers in the true sense are far more common than we perceive.

Research on infectious cancers in other animals may provide us with more understanding and better solutions for preventing the “mother-to-child transmission” of tumors.