CRISPR genome-wide screening solved cancer cell division out of control.  With the advancement of science and technology and the development of medicine, many diseases that were incurable in the past have been alleviated one by one, or even completely cured. However, cancer, as the “king of all diseases”, is like a moat that is difficult to conquer. It has not yet been defeated by humans.

Unfortunately, although we know that genetic mutations allow cancer cells to divide and proliferate indefinitely, it is not clear what specific gene mutations caused this result.

This study used CRISPR screening technology and found that after cells have deleted the TRAF3 gene, even if they reach a certain density that normally sends a signal to stop dividing, they will not stop proliferating. More importantly, this is the first discovery that TRAF3 is related to the occurrence and development of cancer. This discovery may provide key insights for understanding the mechanism of cancer development.

The CRISPR/Cas9 system is widely present in the genome of prokaryotes. It is an acquired immune defense mechanism that bacteria and archaea evolve in response to the invasion of viruses and plasmids. In recent years, the resulting CRISPR/Cas9 technology has been widely used in the fields of gene editing, gene therapy, nucleic acid localization and nucleic acid detection.

Not only that, the genome-wide knockout technology based on the CRISPR/Cas9 system has been used in many biological research fields. It can help researchers quickly determine the effect of knocking out a given gene on the biological phenotype in the whole genome. From this point of view, the application of CRISPR/Cas9 genome-wide knockout technology to cancer gene screening is an excellent research strategy.

It is based on that epithelial cells have an internal mechanism that maintains the proper cell density of normal tissue morphology and homeostasis, and defects in this mechanism may lead to hyperplasia and cancer. In this study, in order to identify genes that regulate the density-dependent proliferation of mouse mammary epithelial cells, the researchers established a fluorescence-activated cell sorting method based on fluorescent ubiquitin cell cycle markers-the method uses different fluorescence The clumps mark the different stages of the cell cycle. 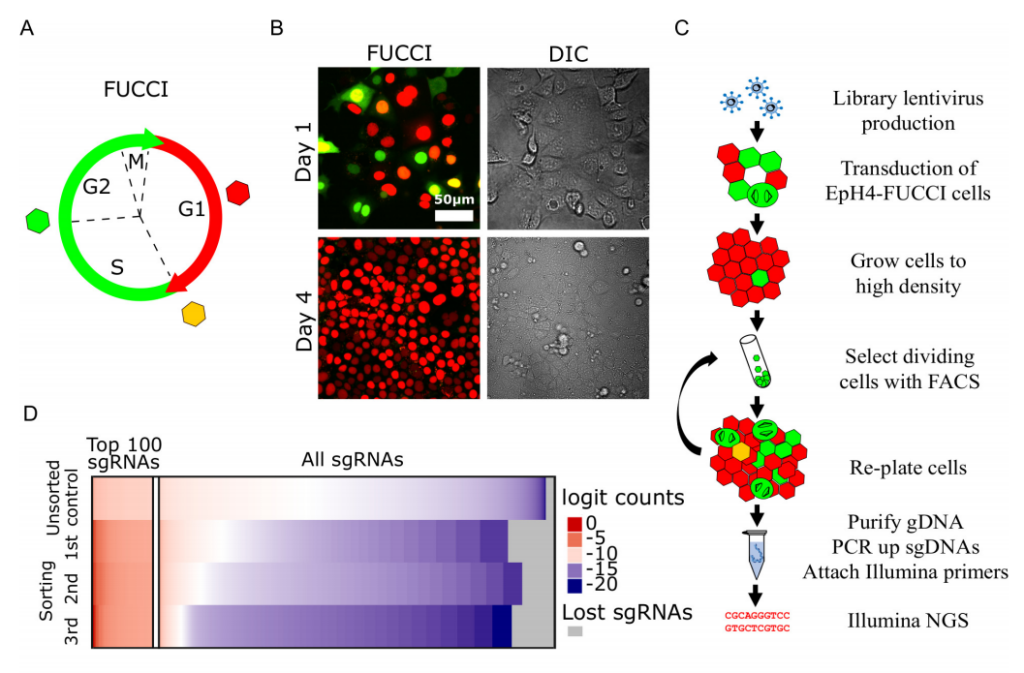 Immediately afterwards, the researchers performed CRISPR/Cas9 genome-wide knockout screening in 40 million epithelial cells, and used the above-mentioned powerful detection method to select those cells that normally proliferate at low densities but continue to divide at high densities. They were surprised to find that the loss of TRAF3 activates the proliferation signaling pathway, which in turn promotes cell division. 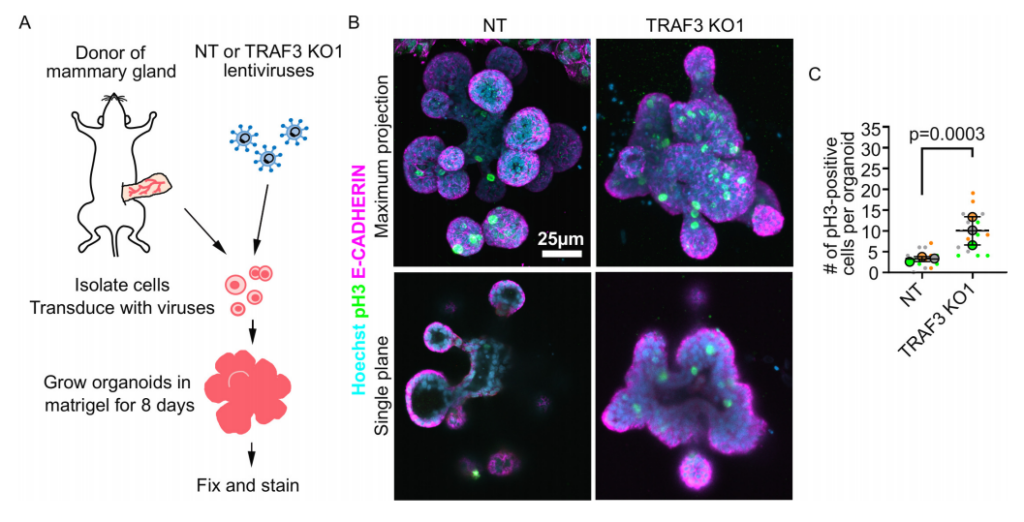 The author stated: “TRAF3 usually activates the immune system and is also a negative regulator of NF-κB signaling. However, there have been no previous studies linking it to uncontrolled cell growth.”

Not only that, the research team also proved that the loss of TRAF3 can specifically activate the atypical NF-κB signaling pathway, which in turn triggers the innate immune response and continues to drive cell division by blocking cells from entering a quiescent state. This mechanism is independent of known density-dependent proliferation mechanisms, including YAP/TAZ signaling and cyclin-dependent kinase inhibitors.

In fact, finding new ways to prevent the uncontrolled proliferation and division of cancer cells is a very popular oncology research. In September 2020, a research team from Johns Hopkins University in the United States reported that inhibiting the PLK4 protein can prevent the proliferation of breast cancer cells. This protein destroys a structure inside the cell, which is essential for cell division.

Coincidentally, in 2018, another research team from Sweden and the United Kingdom discovered that inhibiting the DHODH enzyme can prevent cell division. In addition, researchers at the University of Rochester in the United States used CRISPR/Cas9 technology to knock out Tudor-SN protein from cells, thereby slowing the process of cell division.

All in all, this study confirms the role of TRAF3 gene in epithelial cell division. This discovery may be particularly useful for further understanding the occurrence and development of cancers (such as gastric cancer and lung cancer) that start in epithelial tissues. At present, TRAF3 mutations have been found in some epithelial cell cancers, and its low expression is often associated with poor prognosis. Further research will be needed to determine the impact of this pathway on cancer development.