In principle, taking the CRISPR-Cas9 system as an example, the Cas9 protein will target the complementary DNA double-strand and break it under the guidance of gRNA, thereby inactivating the mutation at the gene site.

However, it is worth noting that the cell repair process after DNA double-strand break is difficult to control and predict, and it may cause unnecessary genetic changes. From this point of view, if an alternative technology can be developed that can change gene expression without damaging DNA, thereby retaining the advantages of CRISPR technology, it can also improve its safety and maneuverability. Drug development is very important.

On April 9, 2021, researchers from the Massachusetts Institute of Technology and the University of California, San Francisco published a research paper on Cell titled: Genome-wide programmable transcriptional memory by CRISPR-based epigenome editing.

This research has developed a CRISPR-based epigenome editing system, CRISPRoff (or CRISPRon), which can control their expression by adding or removing methylation in genes. The research team successfully induced pluripotent stem cells to transform into neurons through CRISPRoff, and inhibited the expression of Tau protein, a protein related to Alzheimer’s disease.

With the development of genetics, people have gradually realized that changes in individual traits are not necessarily due to changes in genetic sequences. In some cases, even if the genetic sequences of two individuals are exactly the same, they can show completely different traits in different environments. This is Epigenetic.

More importantly, recent studies have found that epigenetics is closely related to the occurrence and development of many human diseases, especially cancer. Therefore, many laboratories and pharmaceutical companies are competing to develop epigenetic drugs, but there are more or less problems in development costs, therapeutic effects, and drug side effects.

In this study, the research team proposed a programmable epigenetic memory writer-CRISPRoff, which is formed by the fusion of Cas9 protein (dCas9) with loss of cleavage activity and DNA methyltransferase (DNMT3A). The researchers were surprised to find that CRISPRoff can target most genes in the human genome, even those that do not translate proteins.

DNA methylation is the most common epigenetic mode, and it tends to inhibit the expression of genes related to methylated regions. The research team found that transient CRISPRoff expression would trigger highly specific DNA methylation and gene suppression, and successfully induced pluripotent stem cells to divide and differentiate into neurons.

Not only that, the research team also constructed an epigenetic effector that has the opposite function of CRISPRoff-CRISPRon, which reverses the expression pattern of silent genes and promotes their expression by fusing DNA demethylase and transcription activator.

The researchers also paired CRISPRoff with genome-wide screening and chromatin marker analysis to establish rules for genetic gene silencing. They discovered sgRNAs that can silence most genes, including those lacking the canonical CpG island (cgi), and revealed a broad targeting window beyond the annotated CpG island.

In order to determine whether the CRISPRoff system is suitable for the treatment of major diseases, the researchers decided to test on neurons-through CRISPRoff to reduce the expression of Tau protein in neurons. It is worth mentioning that Tau protein forms “tangles” in the brain, which in turn leads to memory loss and other symptoms of Alzheimer’s disease.

In this regard, Professor Jonathan Weissman, the corresponding author of this study, said: “What we have shown is that this is a feasible strategy to silence Tau protein and prevent its expression. Of course, there are still some questions that need further research to answer. For example, , How do you deliver this thing to adults? Is it really enough to affect Alzheimer’s?”

In fact, CRISPRoff is just one of several methods that scientists have proposed to improve the efficiency and safety of CRISPR over the years. Previously, in 2018, Weissman and others used a technology called CRISPRa (activation) to enhance the expression of a gene that can promote satiety, which they believe provides new hope for obesity treatment. In contrast, a gene editor called CRISPRi (interference) can reduce gene expression. 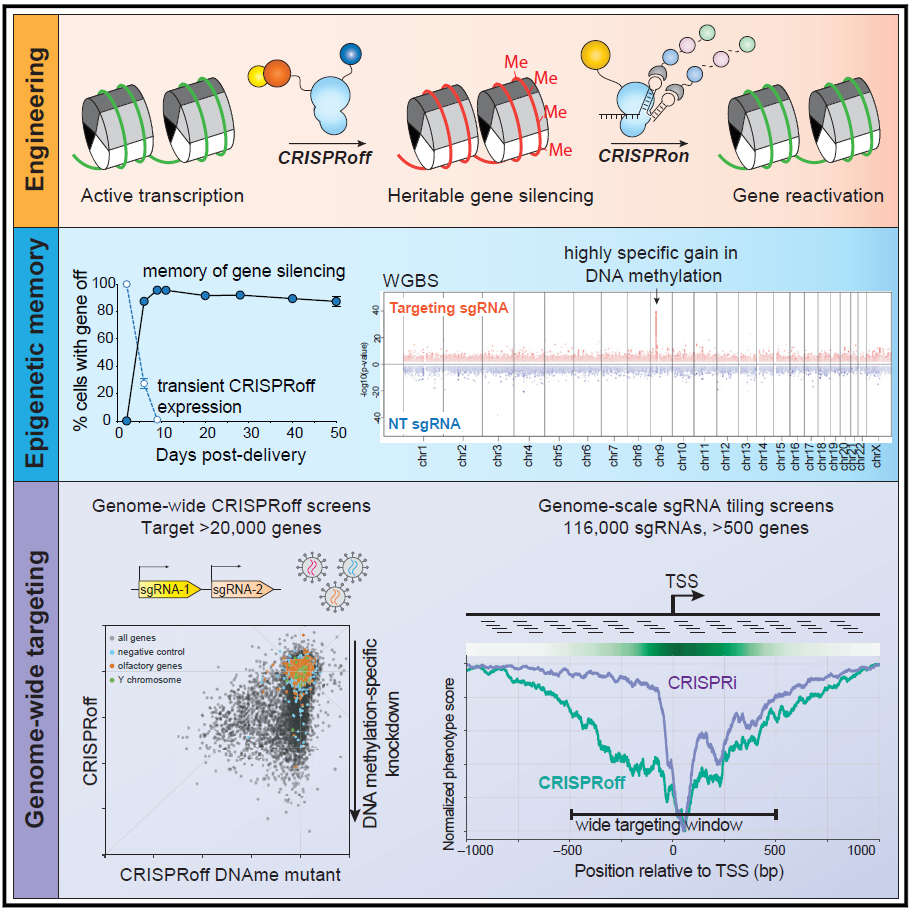 All in all, CRISPRoff has a wide range of ability to initiate heritable gene silencing, and even expands the methylation-based gene silencing mode outside of CpG islands, and enables a variety of applications, including genome-wide screening, multiple cell engineering, and enhancement Sub-silencing and the exploration of epigenetic mechanisms, etc.