Challenge of tumor mutation burden as a biomarker for immunotherapy

Challenge of tumor mutation burden as a biomarker for immunotherapy.  The conceptual definition of TMB is the total number of mutations in tumor specimens.

Immune checkpoint inhibitors (ICIs) are profoundly changing the treatment prospects for many cancers. One T lymphocyte-associated antigen 4 (CTLA-4) inhibitor and six programmed cell death protein pathway inhibitors (PD-1/PD-L1) have been approved by the U.S. Food and Drug Administration (FDA) for a variety of malignant Regulatory approval of tumors. Although some people can get lasting complete remission, the overall response rate (RRs) of these drugs as monotherapy is still very low (15%-20%).

The variability in response to ICIs highlights the need to identify predictive biomarkers. Immunohistochemistry (IHC) detection of PD-L1 expression is one of the most intuitive predictive biomarkers. Another biomarker that has attracted widespread attention recently is tumor mutation burden (TMB), which is a measure of the number of tumor mutations; the more mutations, the more neoantigens, and one or more of the self neoantigens are immunogenic and trigger The higher the chance of a T cell response. Many studies have reported a higher link between the efficacy of TMB and ICI, suggesting that TMB may be a good predictive biomarker.

Definition and determination of TMB

The conceptual definition of TMB is the total number of mutations in tumor specimens. According to different methods, the actual definition of the type of genetic change considered for TMB is different. The characterization of TMB was originally completed by whole exome sequencing (WES). WES essentially believes that genetic changes are limited to exons (coding regions). WES’s TMB calculation includes non-synonymous mutations in the coding region and excludes germline changes by subtracting matched normal samples. 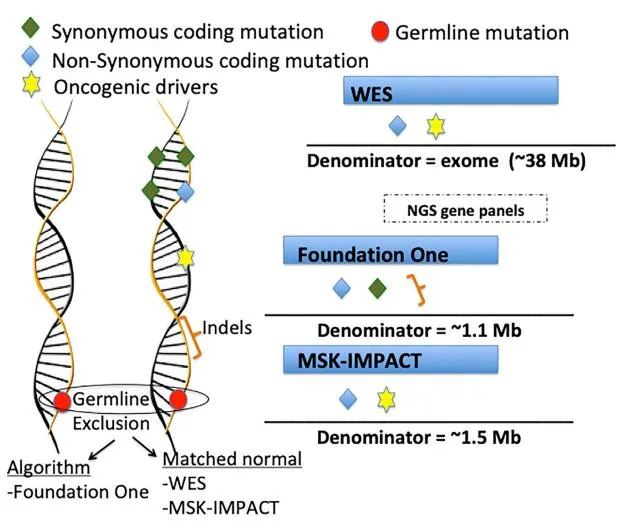 The comprehensive genome analysis test (FoundationOne) of 324 genes (equivalent to 1.1MB encoding genome) developed by the Foundation Medical has proved to be an accurate assessment of TMB by WES. Recently, the FDA approved this test as an auxiliary diagnosis of pembrolizumab for TMB patients with >10 mutations/Mb.

FoundationOne analysis also includes synonymous mutations in its TMB and indels (Indels) in the intron region, which are not included in WES. Indels usually generate new open reading frames of DNA, thereby generating a brand-new peptide, which may have a higher chance of encoding immunogenic neoantigens.

Immune evasion is an important feature of tumors. T cells usually recognize neoantigens produced by mutations and are presented by major histocompatibility complex (MHC) proteins on the surface of cancer cells. To survive, tumors hijack proteins that are usually checkpoints to weaken the immune system’s killing effect.

By blocking immune checkpoint proteins, such as PD-1, PD-L1 and CTLA-4, the immune system can be reawakened. However, once activated, T cells must still be able to distinguish tumors from normal cells. If there are immunogenic neoantigens on the surface of tumor cells, it will help the recognition of tumor cells. Since neoantigens are produced by mutations, the greater the number of mutations (that is, the higher the TMB), the greater the possibility that some neoantigens presented by the MHC protein are immunogenic. On this basis, it is not surprising that high levels of TMB are associated with better outcomes after ICI treatment.

However, any attempt to dichotomize the predictive power of TMB is imperfect, because in theory, the neoantigens recognized by T cells can originate in a low mutation environment (although the probability is low); on the contrary, a large number of mutations do not necessarily transform It is an immunogenic neoantigen.

Several different factors may cause changes in the tumor cell genome, the number of which can be quantified by TMB. Environmental factors (for example, ultraviolet light) and DNA editing errors (MSI) lead to mutation patterns under different characteristics. Each feature may not only affect the number of mutations, but also the quality and immunogenicity of the neoantigens loaded as mutants. 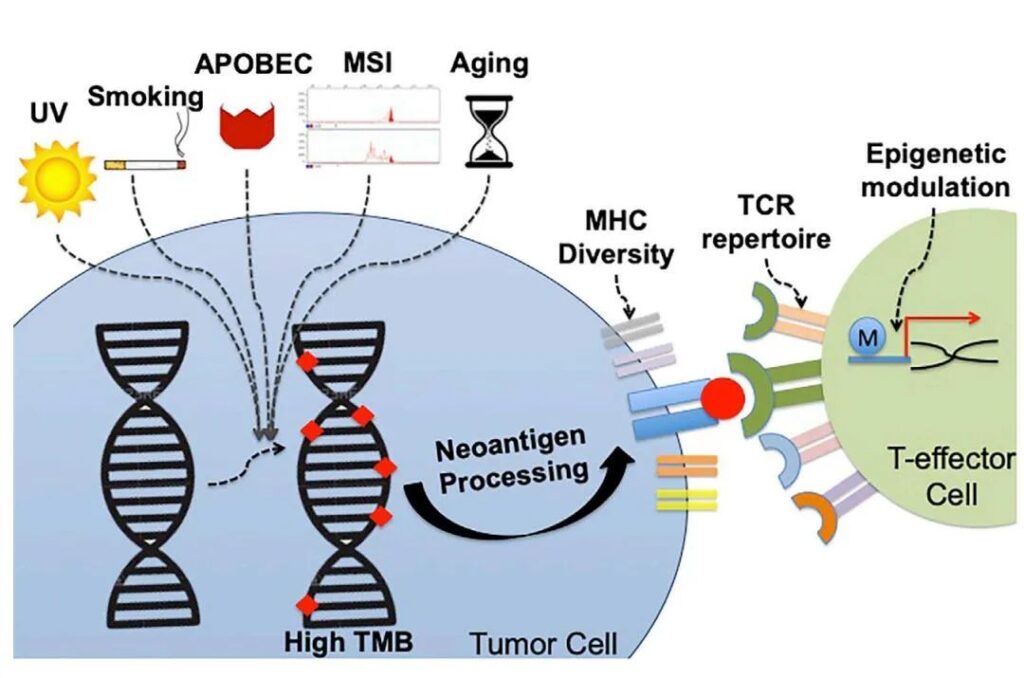 The inherent characteristics of the host will also affect the presentation and recognition of new antigens. For example, MHC diversity defines the degree of neoantigen presentation, while TCR clustering can define neoantigen recognition. Epigenetic regulation (such as histone modification and DNA methylation) may also affect the host’s ability to produce an effective immune response.

Application and challenge of TMB as a biomarker

Low TMB does not rule out response to ICIs

Even in the case of low TMB, ICIs can be effective, although the percentage of patients is small (5%). For example, Kaposi’s sarcoma is a virus-related malignant tumor that responds to ICI. In fact, 6 of 9 patients (67%) who received anti-PD-1 monotherapy achieved complete or partial remission; all patients had low TMB and PD-L1 negative.

The development of accurate ICI response predictors requires a deep understanding of the complexity of immune response and drug resistance, and the integration of multiple variables into composite biomarkers, which may include the expression of TMB, PD-L1, and PD-1. Other checkpoints, and consider its expression cells, tumor molecular characteristics, neoantigen immunogenicity and other characteristics. This integrated conceptual model is called the “Cancer Immunity Map”.

One of the seven parameter categories of the cancer immunity map is tumor foreignness. Although TMB has its limitations in defining the quality of neoantigens, it can be regarded as a representative of foreignness. Other parameters of cancer immune maps include biomarkers related to immune infiltration and metabolism, lack of inhibitors, checkpoint status, and tumor sensitivity to immune effectors. A key aspect of this model is to set the tumor immune system to be dynamic, changing with the development of the disease. Therefore, in this complex system, biomarkers can be added or removed as the disease progresses.

Various evidences indicate that higher TMB is associated with better outcomes after ICI treatment. Although the FDA recently approved the use of the anti-PD-1 antibody pembrolizumab in solid tumors with a TMB >10 mutation/Mb and is developing blood tests to evaluate TMB, the further development of TMB as a clinical biomarker still faces many challenges.

For example, the predictive value of TMB for the combined application of immunotherapy with targeted drugs or chemotherapy has not yet been determined. In addition, it is important to realize that a small percentage (5%) of patients with low TMB respond well to ICIs, and more than 50% of patients with high TMB do not respond. This reflects the complexity of the immune system and the need to incorporate multiple other variables into a composite biomarker in order to more accurately predict the results of ICI and give full play to the potential benefits of immunotherapy.