BCMA in MM: Principles of Targeting and Current Treatment Methods

BCMA in MM: Principles of Targeting and Current Treatment Methods.  The basic principle of targeted BCMA treatment of MM.

The basic principle of targeted BCMA treatment of MM

B cell maturation antigen, also known as TNFRSF17 or CD269, is a member of the tumor necrosis factor receptor (TNFR) superfamily [6,7]. BCMA is preferentially expressed by mature B lymphocytes and least expressed in hematopoietic stem cells or non-hematopoietic tissues, and is essential for the survival of long-lived bone marrow plasma cells (PC), but is not necessary for the overall B cell homeostasis [ 9-12].

The biology of BCMA in MM

In preclinical models and humans, the overexpression and activation of BCMA is related to the progression of MM, which makes it an attractive therapeutic target [7,15,16]. Mouse xenografts that induced overexpression of BCMA grew faster than the BCMA negative control. This overexpression leads to the up-regulation of the canonical and non-canonical nuclear factor kappa B pathways, as well as increased expression of genes essential for survival, growth, adhesion, osteoclast activation, angiogenesis, metastasis, and immune suppression [15] . Additional details about the role of BCMA in B cell biology and MM, including illustrations, can be found in other reviews [18-21].

BCMA as a biomarker for MM diagnosis

Malignant MM PC usually consists of a small part of bone marrow cells, so accurate identification of these cells is important to ensure that the disease is representative [22]. The traditional MM biomarker CD138 is highly specific to PC, but it will quickly disappear from the cell surface when sample analysis is delayed or the sample is frozen [22]. Therefore, additional biomarkers are needed to diagnose or monitor MM.

Compared with normal bone marrow mononuclear cells (BMMC) from healthy donors, BCMA is highly expressed on malignant PCs collected from MM patients, and multiple studies have evaluated whether BCMA markers can be used as a diagnosis, prognosis and/or prediction of liver The value of sclerotherapy response (Table 1) [7,23-28]. Compared with CD138, BCMA is easily found in delayed and frozen MM samples [22]. The level of membrane-bound BCMA can be measured by a variety of techniques (such as flow cytometry, immunohistochemistry), but flow cytometry is more sensitive than immunohistochemistry, although due to different methods, the quantification of BCMA levels in each study May be different [7,23,28]. Interestingly, in patients newly diagnosed with MM and RRMM, malignant PCs will express BCMA mRNA at similar levels, which suggests that BCMA may be a promising therapeutic target in the entire course of MM [24]. 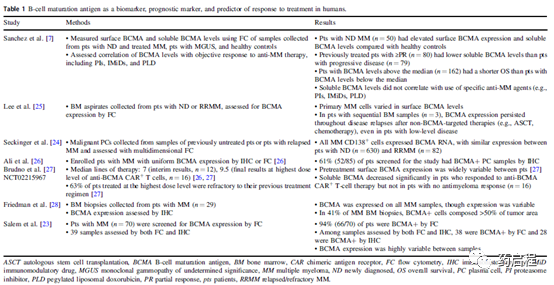 The bispecific antibody construct has been modified to have dual antigen specificity and can promote the cell-to-cell interaction between the patient’s own T cells and malignant cells expressing tumor-specific antigens [45]. As shown in a recent review, several different structures have been used for bispecific antibody constructs studied in tumor clinical trials [46]. The forms of these constructs that have been studied in MM include BiTE® (bispecific T cell adaptor; Amgen) molecules and DuoBody® (Genmab A/S) technology, among others.

The BiTE® molecule is a fusion protein consisting of a single-chain variable fragment m (scFv) with unique antigen specificity (Figure 1) [45].

AMG 420 (previously BI 836909) is a BCMA×CD3 BiTE® molecule that has been studied in RRMM patients (Table 2). A data report from the first phase multi-dose extension study (NCT02514239) in humans, under the condition of 400μg/day, the objective response rate (ORR) is 70% (7/10), including 5 MRD negative CR ( That is 50) MRDA negative rate percentage), 1 VGPR and 1 PR [41, 48].
Overall, the median time for any response is 1 month. The severe AEs (SAEs) observed in more than one patient were infections and polyneuropathy (PN). Treatment-related SAEs included 2 cases of grade 3 PN and 1 case of grade 3 edema. Three of the 42 patients in the phase 1 study were observed to have grade 2 or 3 cytokine release syndrome (CRS). AMG 701 is a BiTE® molecule that targets the prolonged half-life of BCMA. It seems to induce effective T cell targeted lysis of BCMA-positive MM cells in vitro [52] and is in clinical development.

Once bound to target cells expressing TAA, ADC is internalized and releases a toxic payload to induce DNA damage and cell death (Figure 2) [17, 39, 59]. The cleavable linker is processed by the enzyme in the target cell, and the ADC with the non-cleavable linker requires the degradation of the antibody in the lysosome to release the payload [59]. Currently, an anti-BCMA ADC (GSK2857916) has shown anti-myeloma activity in a phase 1 clinical trial, while others have been studied in preclinical species. 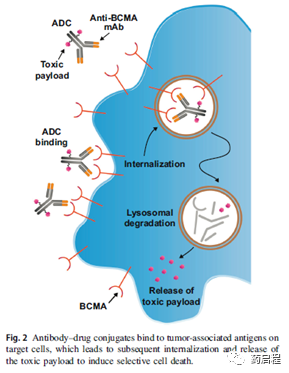 GSK2857916 was studied in a phase 1 clinical trial in patients with progressive MM (NCT02064387), which included dose escalation and expansion (Table 2) [31, 61]. GSK2857916 was infused for 1 hour every 3 weeks, and the ORR during the dose expansion phase was 60% (21/35 patients), including two sCR, three CR, 14 VGPR and two PR. The total median PFS of these patients was 12.0 months. The most common grade 3 or 4 adverse events (AE) during the dose increase period were thrombocytopenia (34%) and anemia (17%). According to reports, 69% of patients had corneal events, most of which were mild to moderate, with a median duration of 35 days. GSK2857916 was awarded the title of breakthrough treatment by the U.S. Food and Drug Administration (FDA) in November 2017, and is currently being studied in clinical trials in combination with IMiD therapy for RRMM patients [62].

Another CAR T cell construct similar to bb2121, namely bb21217, is also under clinical research [40]. These CAR T cells are cultured in vitro in the presence of the phosphoinositide 3-kinase inhibitor bb007 to promote a memory-like phenotype, which is speculated to increase the persistence and efficacy of CAR T cells. Among the seven treated patients, the ORR was 86% (one sCR, three VGPR, and two PR), and through next-generation sequencing, all three evaluable responders were MRD negative. CRS was observed in 62.5% (5/8) of patients, including 1 case of grade 3 CRS with grade 4 encephalopathy and signs of posterior reversible encephalopathy syndrome.

US National Institutes of Health

NIH CAR-BCMA has been studied in a phase 1 doseescalscal trial in patients with uniform BCMA expression on PC with assessment of scalability [26, 27]. Among the 16 patients who received 9×106 cells/kg or higher, the ORR was 81% (13/16). Through bone marrow assessment, 2 months after NIH CAR-BCMA infusion, all 11 patients were assessed All patients had MRD-negative diseases by flow cytometry (detection limit, 7×10-6). The duration of myeloma response ranged from 2 to 51 weeks. Of the 11 MRD-negative patients, 6 continued to respond during the last follow-up before publication. The lower dose (no CRS ≥3) is associated with mild treatment-related toxicity. However, at the highest dose tested (9×106 cells/kg), CRS-related toxicity is quite high, especially for patients with high tumor burden. Overall, 38% of patients require antihypertensive drugs to support blood pressure reduction. The nervous system toxicity associated with severe CRS is limited to confusion or delusion, and only one patient experienced encephalopathy and muscle weakness consistent with PN.

FCARH143 is a CAR T cell therapy for human BCMA. It is formulated with a 1:1 ratio of CD4+ and CD8+ CAR T cells for infusion, and expresses truncated non-functional human epidermal growth factor receptor to help identification Transduced T cells [73]. The preliminary results of an ongoing phase 1 clinical trial of RRMM patients showed that FCARH143 treatment was associated with the ORR of 6 evaluable patients at 28 days as 100%, and through immunohistochemistry and flow cytometry, all 6 cases None of the patients detected abnormal bone marrow PCs. Currently, the median (range) follow-up for all patients is 16 (2–26) weeks. 86% of patients experienced CRS grade 2 or lower, and no neurotoxicity was observed.

LCAR-B38M is a dual epitope combined with CAR T cell therapy for two different BCMA epitopes, which was studied in a phase 1 trial of RRMM patients [32]. The ORR of three doses of LCAR-B38M infusion within 7 days was 88% (50/57 cases), including 39 cases of CR, 3 cases of VGPR and 8 cases of PR. The negative rate of MRD was 63% (36/57 cases). ) Assessed by bone marrow flow cytometry), defined as 1 tumor cell in <104 normal cells. At the time of the data cut-off before publication, 20% of patients who achieved PR or higher subsequently progressed with a median PFS of 15 months. The most common ≥ grade 3 adverse events were leukopenia (30%), thrombocytopenia (23%) and elevated aspartate aminotransferase (21%). 90% (51/57) of the patients had experienced any severe CRS, including 4 (7%) patients with CRS ≥3, and one of them had Grade 1 neurotoxicity. In another exploratory trial of LCAR-B38M, 17 RRMM patients were observed in a single site, and its efficacy and safety were similar, regardless of whether LCAR-B38M was administered by three infusions or single infusions[ 79].

JCARH125 is a completely human CAR T cell therapy with a costimulatory domain of 4-1BB, which has been studied in a multicenter phase 1/2 trial in patients with RRMM (EVOLVE) [33]. Among 44 patients treated with a dose of 50, 150, or 450×106 cells, the ORR was 82%, and 48% of the patients achieved VGPR or higher. The condition of some patients improved over time, and on the 29th day after the infusion, through next-generation sequencing (defined as ≤1 tumor cell per 105 normal cells), six of the nine evaluable patients were MRD negative. CRS occurs in 80% of patients, and 9% of patients experience grade ≥3 CRS. Neurotoxicity of grade 1 to grade 2 and grade ≥3 occurred in 18 and 7% of patients, respectively.

MCARH171 is a human-derived CAR T cell therapy with a truncated EGFR safety system, which has been studied in a phase 1 dose escalation trial [77]. In 11 patients, the ORR of all tested dose levels was 64%; all five patients who received the higher dose level tested (≥450×106 cells) achieved an objective response. The duration of the response ranged from 17 to 235 days. Three-fifths of the patients were treated at the highest dose, and their response time was more than 6 months, while two patients were treated at 7.5 and 10 months of follow-up continued to respond. Grade 1-2 and Grade 3 CRS occurred in 40% and 20% of patients, respectively, and one case of Grade 2 neurotoxicity (encephalopathy) was reported.

CART-BCMA is a CAR T cell therapy with full human scFv with T4-1BB costimulatory domain, which has been studied in a phase 1 open-label study of RRMM patients [37]. Twenty-five patients received treatment in 3 dose groups with different CART-BCMA dose levels and/or co-administration of cyclophosphamide (Table 3). In all 25 patients receiving treatment, the ORR was 48%, and in patients receiving higher dose levels (1-5×108 CART-BCMA cells), the ORR was higher (55%). The median (range) response duration was 124.5 (29-939+) days. Three patients had no progress at the time of the data cutoff, and the median overall survival time of all patients receiving treatment was 502 days. Regardless of the attribution to the study drug, AEs of grade 3 or higher were observed in 96% (24/25) of patients. CRS was observed in 88% of patients (32% of grade 3 or 4), and 32% of patients developed neurotoxicity (including 3 cases of grade 3-4 encephalopathy).