Roche New Prot-2+1 TCB Antibody.  Glofitamab is a T cell bispecific antibody targeting CD20XCD3. The structure of the antibody is “2+1” (CD20-TCB), that is, there are two CD20 binding sites and one CD3 binding site.

Phase I clinical data show that the antibody has a strong and powerful effect on B-NHL, and has a longer-lasting relief and controllable safety. 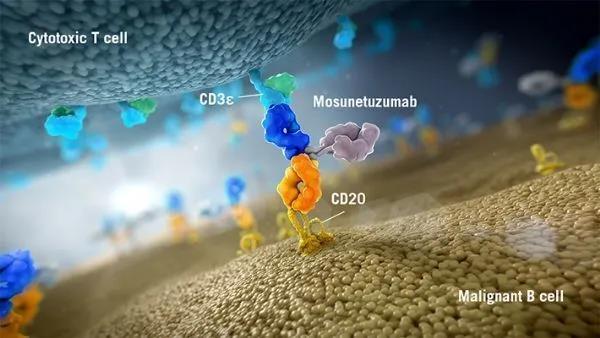 The success of CD20-TCB has inspired researchers to explore more extensively. Based on the structure of this antibody, Roche has also constructed related antibodies for the treatment of solid tumors, such as CEA-TCB (RO6958688) and FOLR1-TCB.

At present, the antibody has completed the first phase of clinical trials and has certain curative effects. However, in the preclinical experiments of FOLR1-TCB, a lower antibody dose can trigger on-target off-tumor toxic side effects. In order to solve the on-target off-tumor effect of TCB antibodies, Roche made improvements on the basis of TCB. Invented Prot-TCB. 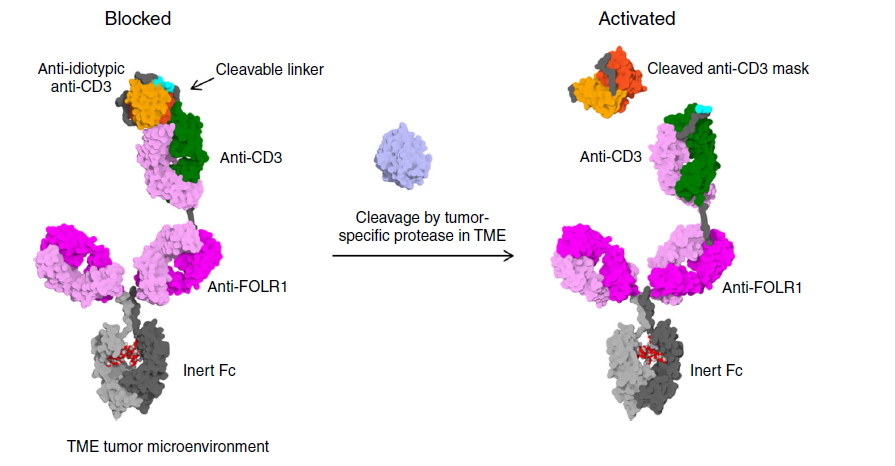 Unlike the original TCB, Prot-TCB puts the Fab that binds the CD3 antigen on the top of the long arm, and at the same time fused the Fab with the single-chain antibody scFv (Anti-idiotypic anti-CD3) against this Fab.

The connection between Fab and scFv is through a specific enzyme cut site. In tumors, this site is specifically cleaved by enzymes and exposes the CD3 binding site, which activates T cells to kill tumor cells. In normal tissues, this site The spot cannot be cleaved, so the antibody cannot bind to the CD3 antigen to activate T cells. 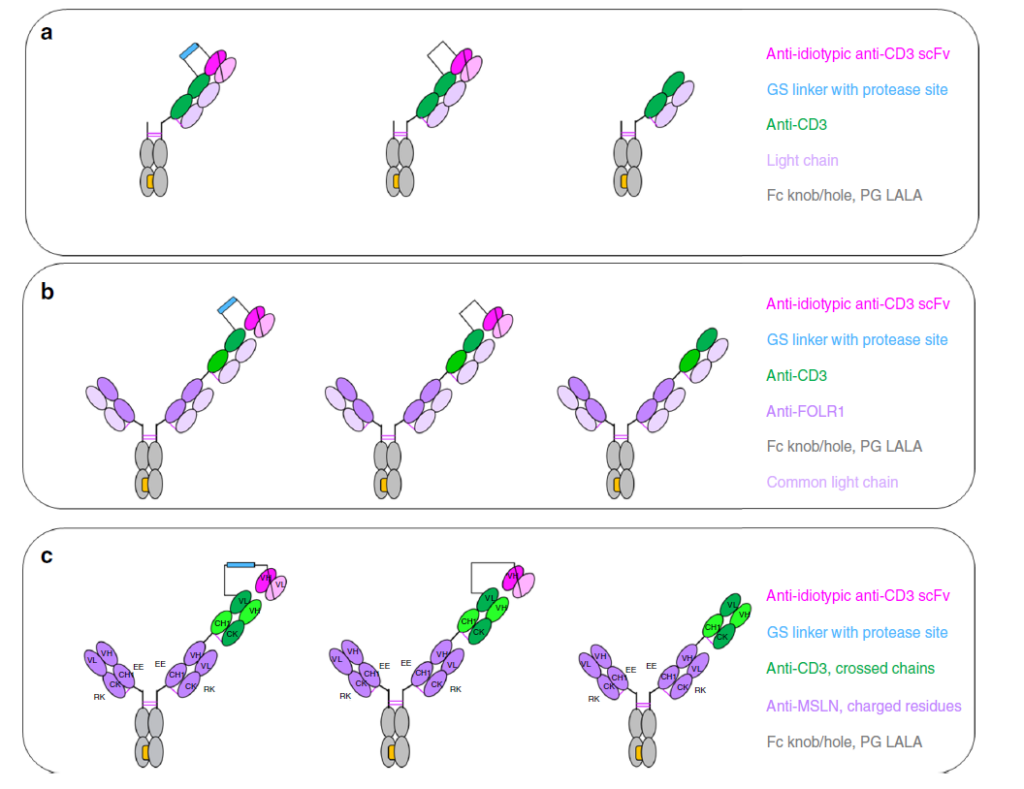 In vitro experiments have shown that Prot-TCB kills tumor cells in a dose-dependent manner (Figure 4a-4f), while TCB using non-cleavable linkers will have weaker effects at higher concentrations of antibodies, or no effect. 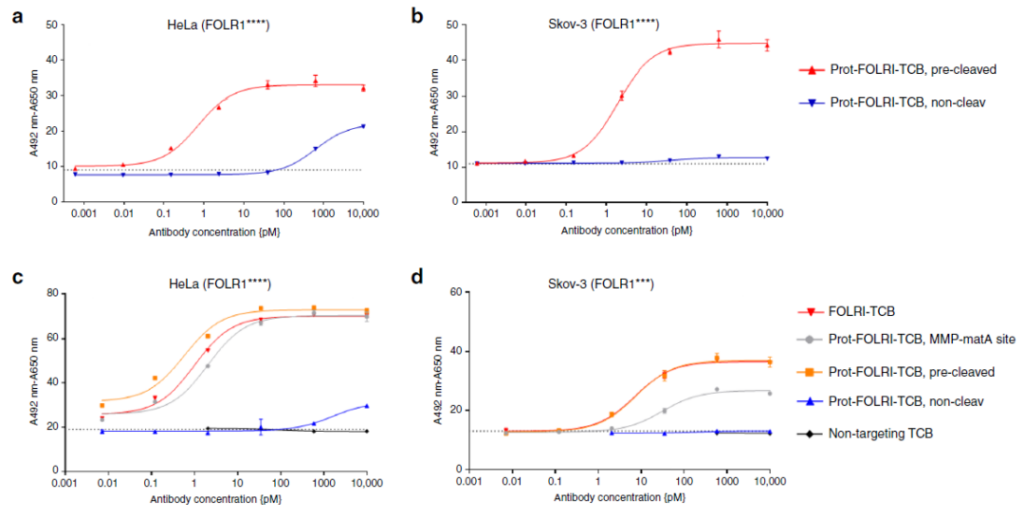 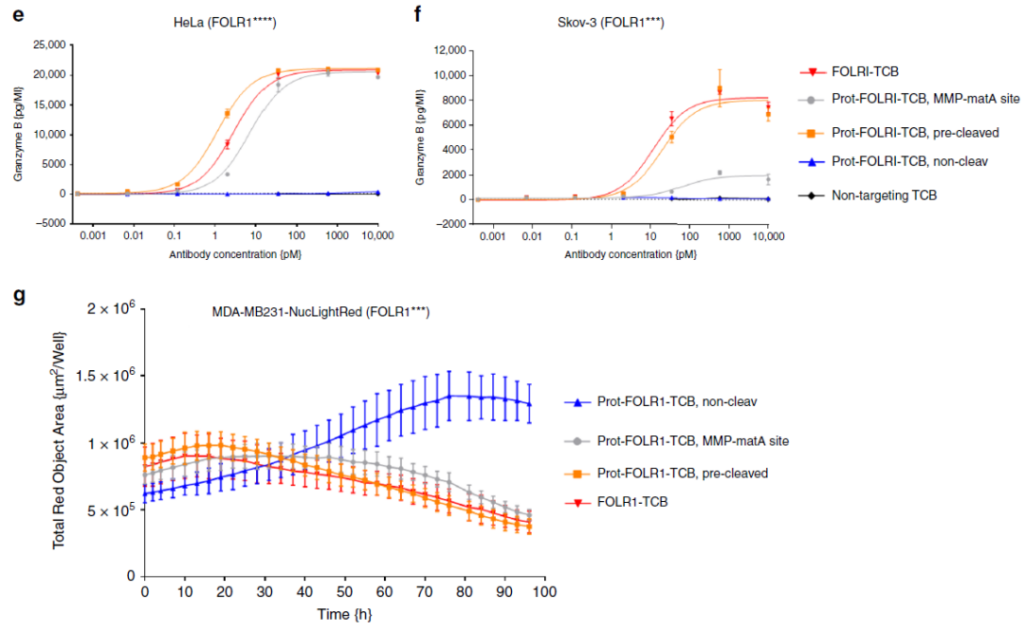 Activation of Prot-FOLR1-TCB by tumor tissue

Tumor-derived tissues were directly incubated with Prot-FOLR1-TCB containing different restriction sites without digestion to detect the activation of T cells.

These results prove that Prot-FOLR1-TCB can be specifically activated in tumor tissues, but different restriction sites have different activation efficiencies. 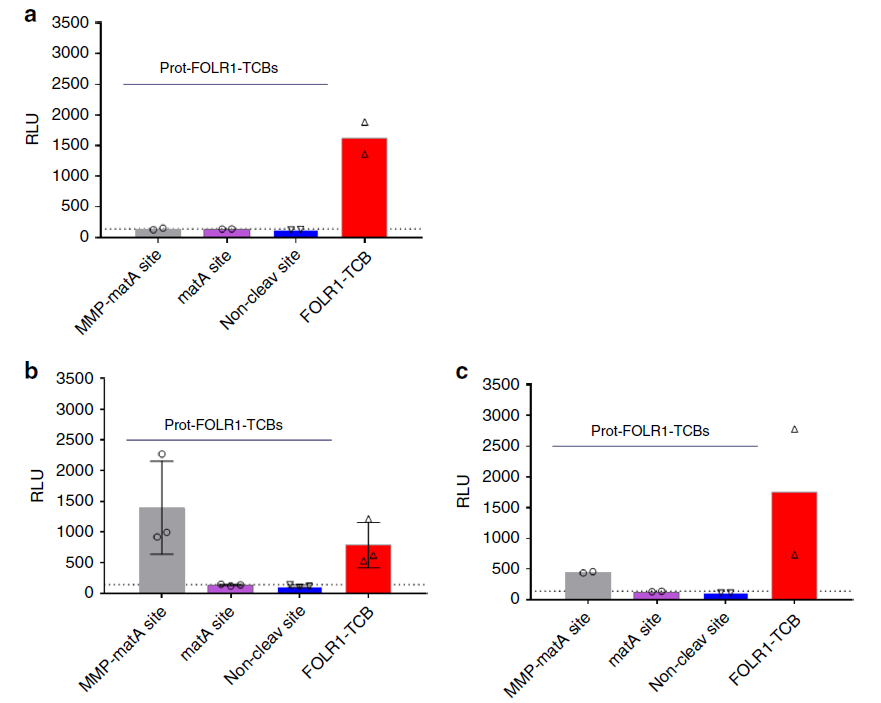 Stability of Prot-FOLR1-TCB in blood

PDX BC004 animal model verifies the effectiveness of Prot-FOLR1-TCB

The Prot-FOLR1-TCB with non-cleavable linker has the same pharmacological effect as the solvent and has almost no tumor-inhibiting effect. Among the animals treated with Prot-FOLR1-TCB containing matB restriction sites, the number of CD3-positive T cells was the largest, even better than that in the FOLR1-TCB treatment group.

These results prove that Prot-FOLR1-TCB can specifically activate T cells in tumors and inhibit tumor growth. 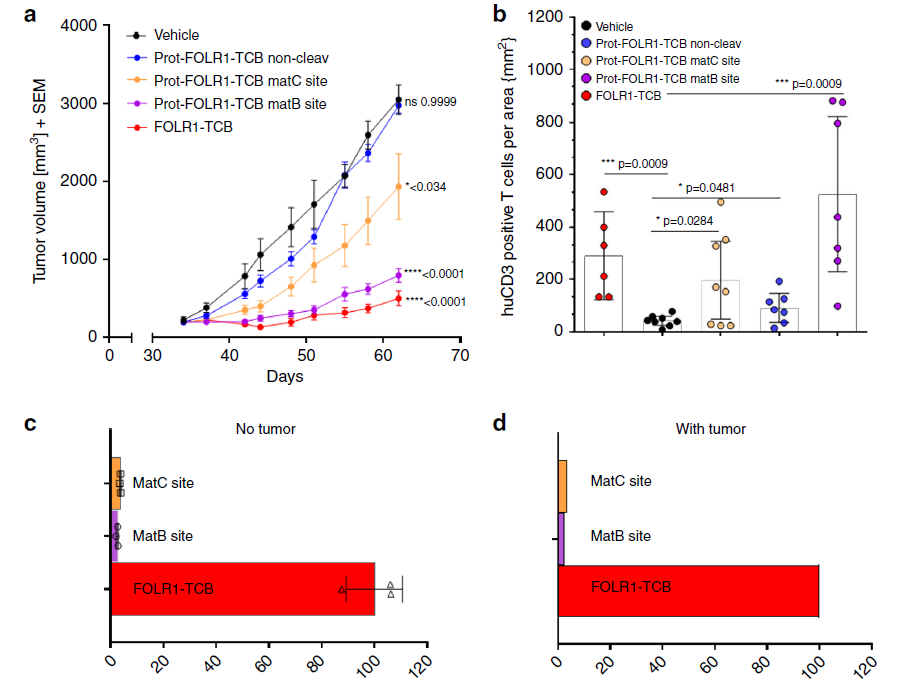 The TCB bispecific antibody has a good therapeutic effect in hematoma, but it is not satisfactory in solid tumors. This is mainly because most of the targets in solid tumors are also expressed in normal tissues, thus forming an On-target off-Tumor effect. .

At present, there are many platforms that use enzyme-specific activation antibodies specifically expressed in tumors, such as Probod, SAFEbody, etc., and there are also technologies that use low pH activation antibodies in the tumor microenvironment, such as CAB. The application of these technologies can increase the dosage of antibodies, thereby expanding the therapeutic window, so there will be better therapeutic prospects.