Cell: How can RAS signal transmission in cancer cells be achieved without relying on cell membranes?

RAS signal transmission in cancer cells be achieved without relying on cell membranes?  The activation of downstream effector pathways mediated by tyrosine kinase (RTK), such as the RAS GTPase/MAP kinase (MAPK) signal cascade, is thought to occur only in the lipid membrane region of mammalian cells.

In a recent study, the Trever G. Bivona team from the University of California, San Francisco, USA discovered a membraneless subcellular structure based on protein particles that can organize RTK / RAS / MAPK signaling in cancer. The relevant results were published in the “Cell” magazine. 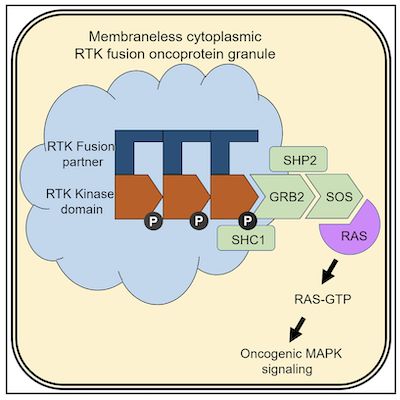 Receptor tyrosine kinase (RTK)/RAS/MAP kinase (MAPK) signals play an important role in regulating the proliferation and survival of normal human cells, and are usually overactivated in human cancers through a variety of mechanisms.

Under normal conditions, RTK is an indispensable membrane protein, and RTK signal activation was previously thought to occur only in the lipid membrane area, including the plasma membrane (PM) of the cell and the membrane-capped organelles in the cell, such as endosomes.

In addition, the activation of RAS GTPase and downstream MAPK signal transduction depend on the binding of RAS protein to lipid membranes.

Although previous studies have found a link between transcription factor condensates and cancer, the functional role of biomolecular condensates in oncogenic signal transduction and cancer pathogenesis remains to be determined. 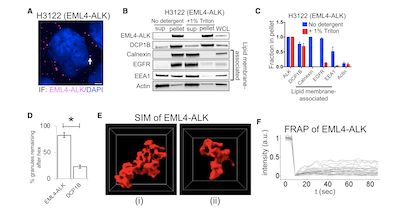 The abnormalities of RTK/RAS/MAPK signal transduction in the process of cancer include chromosomal rearrangements involving RTKs, which will produce chimeric oncoproteins. Almost all oncogenic ALK and RET fusion proteins retain intracellular domains. Including kinases, but lacking the natural transmembrane domain.

Therefore, how these cancerous RTK proteins undergo signal transduction without relying on cell membrane structure, and how these RTK fusion oncoproteins activate RAS signals have become an urgent problem to be solved.

Studies have shown that the formation of the EML4-ALK complex is not limited to the cell membrane, but is located in an unknown intracellular punctate cytoplasmic structure, and this specific intracellular location is essential for EML4-ALK to activate RAS and downstream MAPK signaling. . 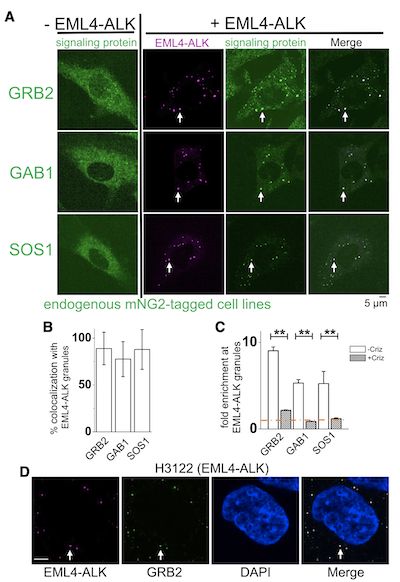 In this study, the author tried to study the location of ALK fusion oncoprotein in cells, and focused the initial research on EML4-ALK variant 1. First, the author used patient-derived cancer cells H3112 (which endogenously express EML4-ALK variants) for immunofluorescence detection, confirming that EML4-ALK is located in punctate structures in the cytoplasm, rather than the cell membrane.

Later, the authors verified the above findings by performing imaging analysis in Beas2B cells expressing FLAG-tagged EML4-ALK. Then, the author used a series of mature cytological detection methods to study the biophysical properties of EML4-ALK. The study found that EML4-ALK particles are not simple, homogeneous droplets:

1) No fission or fusion event was observed in the time window of live cell imaging, and most particles still exist after hexylene glycol treatment, which is different from the liquid P-body labeled with DCP1B;

2) The results of super-resolution microscopy imaging show that EML4-ALK particles exhibit a porous and curved shape, rather than the smooth and spherical appearance characteristics of liquid droplets;

3) The result of photobleached fluorescence recovery imaging (FRAP) shows that there is a heterogeneous EML4-ALK exchange phenomenon between the surrounding cytoplasm between particles, and the median recovery efficiency within 1 minute is 10%, and some of the particles The highest recovery rate is 40%.

On this basis, the authors found that when this membraneless complex has a highly ordered feature, it can still activate the downstream RAS/MAPK without depending on the cell membrane structure, while the low-order protein complex does not. Have the above capabilities.

In summary, through a series of ingenious designs and high-resolution imaging experiments, the author discovered a new intracellular protein particle structure formed by RTK, and established the structural rules that define RTK oncoproteins to form non-membrane protein particles. This discovery reveals that the membraneless, highly ordered cytoplasmic protein conformer is a unique subcellular platform for oncogenic RTK and RAS signaling.