Zynlonta is an antibody-conjugated drug (ADC) that targets CD19. It consists of a humanized anti-human CD19 monoclonal antibody and pyrrolobenzodiazepine (PBD) dimer cytotoxin through a connector. Coupled. 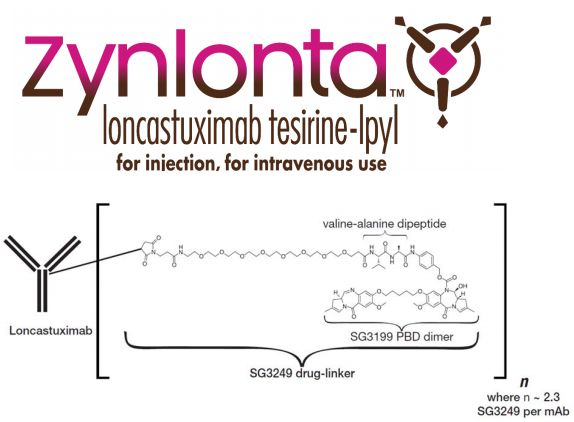 The recommended dose of Zynlonta is: 0.15 mg/kg intravenous infusion every 3 weeks for 2 consecutive cycles; thereafter 0.075 mg/kg per cycle every 3 weeks. Zynlonta was developed by the Swiss pharmaceutical company ADC Therapeutics SA. In China, Zynlonta is being developed by Overland ADCT BioPharma, a joint venture established by ADC Therapeutics and Overland Pharmaceuticals.

The active pharmaceutical ingredient of Zynlonta is loncastuximab tesirine, which is an antibody-conjugated drug targeting CD19. A humanized anti-human CD19 monoclonal antibody dimerizes with pyrrolobenzodiazepine (PBD) through a connector. Somatic cell toxin conjugated.

Once bound to CD19-expressing cells, loncastuximab tesirine will be internalized by the cell, and then release cytotoxin, the toxin can irreversibly bind to DNA, resulting in strong inter-strand cross-links that prevent DNA strand separation, thereby disrupting replication. The process of DNA metabolism eventually leads to cell death. CD19 is a proven popular target for the treatment of B-cell malignancies.

The above table shows the steady-state plasma exposure in the second cycle at the recommended dose approved by Zynlonta. The steady-state Cmax of Zynlonta is 28.2% lower than the Cmax after the first administration, and the time to steady-state is 210 days.

The efficacy of Zynlonta was evaluated in the LOTIS-2 clinical trial (NCT03589469), an open-label one-arm trial that enrolled 145 adult patients with relapsed or refractory diffuse large B-cell lymphoma. These The patient underwent at least 2 systemic treatments.

The efficacy endpoint is based on the overall response rate (ORR) assessed by the Independent Review Committee (IRC) using the Lugano 2014 standard. The median follow-up time was 7.3 months (range 0.3 to 20.2), and the median time from initiation of treatment to remission was 1.3 months (range 1.1 to 8.1). 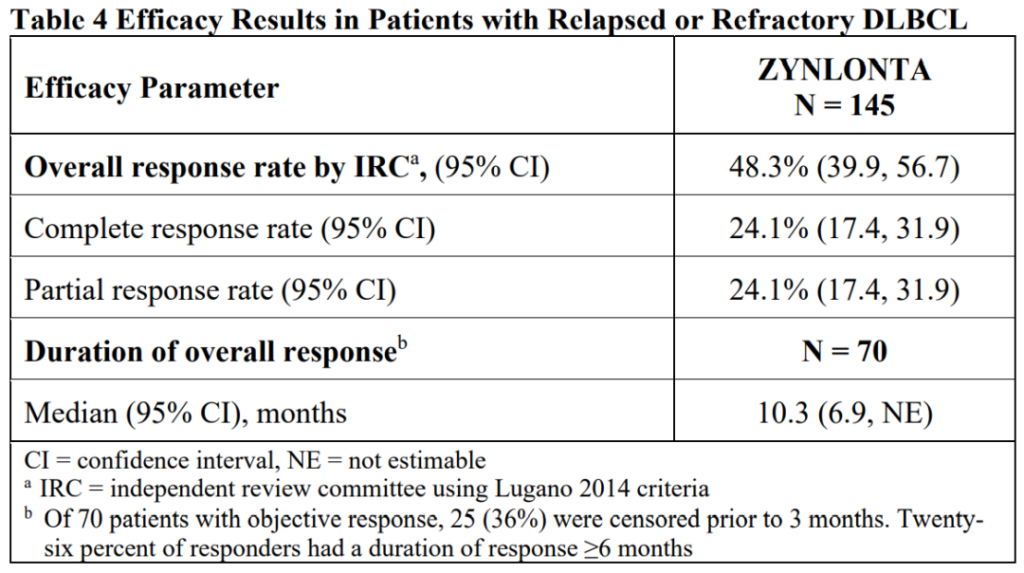