However, we lack experience in targeting RNA. Not long ago, the concept of selectively targeting RNA with small molecules was considered a huge scientific challenge.

RNA is actually very attractive as a therapeutic target. We found that only 1.5% of the genome is finally translated into protein, and 70-90% is transcribed into RNA! However, using small molecules to target RNA also has its own risks.

On the one hand, RNA is dynamic in nature with limited chemical diversity. On the other hand, chaotic RNA-binding ligands are often identified in screening activities. Different from the protein composed of 22 kinds of proteins, RNA only consists of four primary nucleotide monomers of adenine (A), uracil (U), guanine (G) and cytosine (C), which may be a market The reason for the scarcity of small molecule drugs targeting RNA. 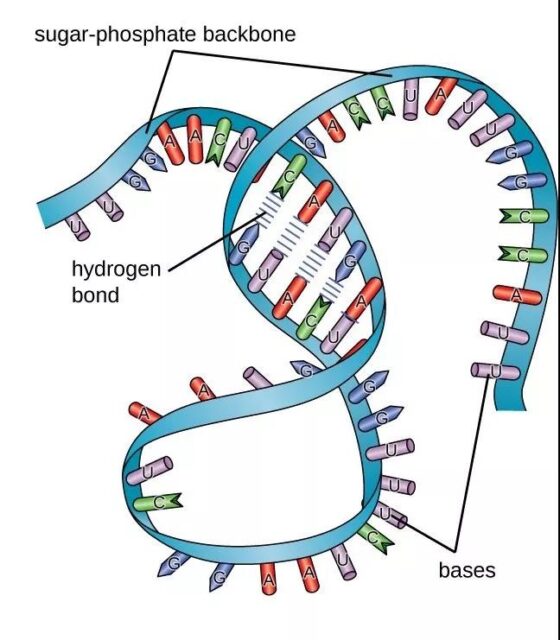 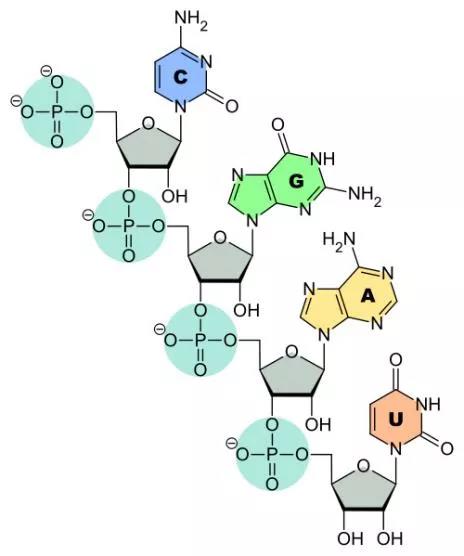 As it happens, spinal muscular atrophy (SMA) is a perfect candidate for targeted RNA splicing.

SMA is one of the most common hereditary neuromuscular diseases, one in every 10,000 live births suffers from this disease.

The main cause of SMA is low levels of survival motor neuron (SMN) protein, which is encoded by the SMN1 gene.

SMN1 full-length mRNA encodes SMN protein, which is an essential protein for normal development and functional homeostasis of all species.

The SMN2 gene is almost identical to the SMN1 gene, except for a cytosine (C) to tyrosine (T) substitution, which results in splicing of precursor messenger RNA (pre-mRNA) in 85% of the transcript, excluding the seventh Proton.

In terminology, exons are coding sequences, and introns are non-coding extensions of RNA sequences. Gene splicing is a post-transcriptional modification in which a gene can encode multiple proteins.

Before mRNA translation, this is done by distinguishing between inclusion and exclusion of pre-mRNA. If we find drugs that can increase the SMN2 splicing modification contained in exon 7, these drugs will be promising drugs for the treatment of SMA.

In the late 1950s, Francis Crick, the co-discoverer of the double helix structure of deoxyribonucleic acid (DNA), proposed the central principle of genetic information flow. The central law describes the flow of gene information in the two-step process of one-way vector transcription and translation: DNA→mRNA→protein.

Essentially, after DNA is transcribed into mRNA, the mRNA is translated into protein (in this particular case, SMN protein). Recently, Pfizer and Moderna’s mRNA vaccines have achieved great success and can produce spike proteins against SAR-CoV-2. The RNA-based vaccine saved the situation during the COVID-19 pandemic.

Since SMA is characterized by lack of SMN protein, all existing treatment methods work by increasing the level of SMN protein. This can be achieved by changing the splicing process of SMN2 to increase the inclusion of exon 7 or by re-expression of SMN1. Although the deletion of the SMN1 gene is the root cause of the disease, the SMN2 gene is the main disease-modifying gene of SMA. 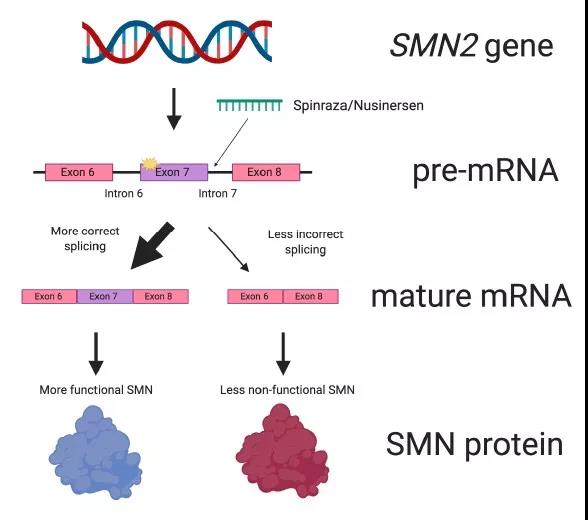 Biogen’s nusinersen (Spinaraza) has been on the market since 2016 and is an antisense oligonucleotide (ASO). It regulates the alternative splicing of the SMN2 gene and functionally converts it into the SMN1 gene, thereby increasing the level of SMN protein in the central nervous system (CNS). But nusinersen must be injected intrathecally (injected directly into the spine). This requires anesthesia, and there are reports that some parents choose to let their children with SMA leave school one month in advance to prevent any diseases that may affect the operation. 2

Another way to treat SMA is Novartis’s gene therapy onasemnogene (Zolgensma) based on adeno-associated virus 9 (AAV9). This is a recombinant adenovirus vector encoding the full-length SMN protein, which was approved in 2019. This method does not theoretically depend on the SMN2 gene. Onasemnogene is a one-time intravenous injection of corticosteroids for at least two months to protect the liver. Since the cost of each treatment in 2019 was US$2.15 million, Zolgensma won the honor of being the most expensive drug in the world! 2

In 2020, the small molecule SMA2 guided RNA splicing modifier risdiplam (Evrysdi, 1) was approved by the FDA for the treatment of SMA. The drug was discovered by PTC Therapeutics in collaboration with Roche and the SMA Foundation.

During the splicing process of SMN2 pre-mRNA, PTC interacts with the RNA components of the splicing mechanism to carry out phenotypic high-throughput screening (HTS) activities to identify small molecules that are conducive to the inclusion of exon 7. Coumarin 2 is considered a promising product. Unfortunately, coumarin 2 and its isocoumarin derivatives were positive in the Ames test, indicating that it has potential mutagenicity. To make matters worse, both coumarin and isocoumarin are unstable in plasma proteins, and it is well known that they are related to phototoxicity.

In cooperation with Roche and the SMA Foundation, PTC has carried out their leading optimization. The scaffold jumping led to the discovery of the core structure pyridine pyrimidine-4-1. After extensive structure-activity relationship (SAR) research, RG7800(3) became the first small molecule SMN2 shear modifier to enter human clinical trials.

However, the clinical study of RG7800(3) was temporarily shelved as a preventive measure due to safety issues found in the long-term toxicity study of cynomolgus monkeys. In addition, RG7800(3) is a weak substrate of the human ether-a-go-go (hERG) potassium ion channel, so there are some selectivity problems and potential cardiotoxicity problems. In addition, the drug may also cause phototoxicity. 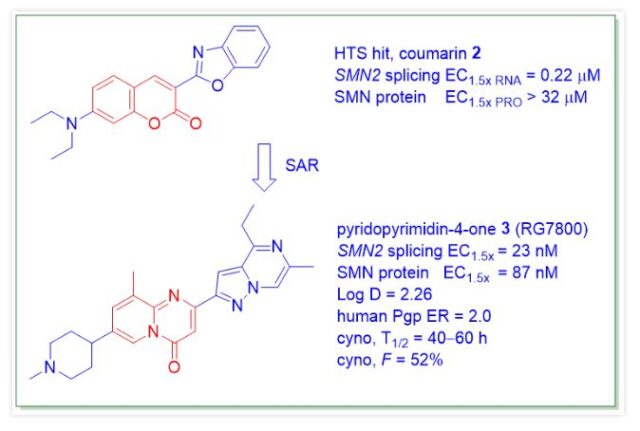 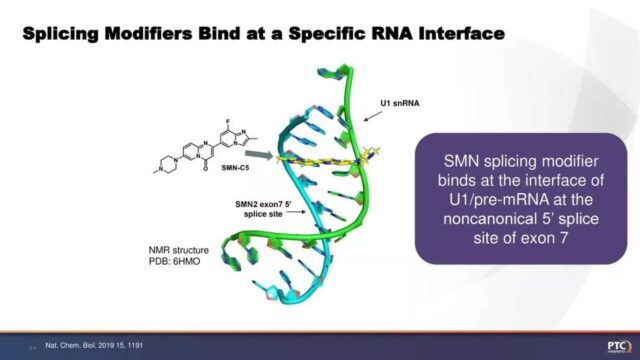 Further optimization of RG7800 (3) reduced the activity of off-target genes and significantly increased the potency on the target, thereby reducing the effective dose and improving the treatment window. Finally, their result is that risdiplam (1) has good pharmacokinetic properties and ideal systemic tissue distribution.

This is a beautiful work of medicinal chemistry and drug design.

Risdiplam (1) is a small molecule drug that fully complies with Lipinskiʹs rule of 5 and has excellent physical and chemical properties. risdiplam (1) has been shown to have good bioavailability to enter the central nervous system (CNS) and peripheral tissues orally. risdiplam (1) is a highly effective SMN2 splicing modifier that increases the exon 7 content of SMN2 mRNA transcription in in vitro testing and SMA transgenic mouse models.

In clinical trials, risdiplam (1) has been proven to increase SMN protein in a consistent dose and time. After one month of exposure, the median ratio of SMN protein to patients given the highest dose increased by approximately 2.

Risdiplam (Evrysdi, 1) is an important milestone in drug discovery. With the emergence of legal proof-of-concept (PoC), more and more small-molecule drugs targeting RNA will certainly follow, conquering many drug targets that we have not yet conquered. In fact, several companies including Skyhawk and Arrakis have clearly established platforms that use small molecules as RNA splicing modifiers.