The purpose of post-exposure prophylactic treatment is to prevent individuals from contracting influenza after contact with an influenza virus-infected person. This approval is based on data from 3 phase III clinical studies (CAPSTONE-1, CAPSTONE-2, and BLOCKSTONE).

It is worth mentioning that Xofluza is the first anti-influenza drug with an innovative mechanism of action approved by the European Union in the past 20 years. In the United States, Xofluza is also the first anti-influenza drug with a new mechanism approved by the FDA in the past 20 years. In clinical trials, a single treatment with Xofluza can significantly reduce the duration of flu symptoms and significantly reduce virus excretion in just one day.

Influenza is one of the most common but serious infectious diseases, posing a major threat to public health. Globally, influenza causes 3 to 5 million serious illnesses every year, millions of people are hospitalized, and up to 650,000 people die. Xofluza can quickly reduce virus replication, help patients recover faster, and reduce the social burden of influenza.

Roche Chief Medical Officer and Head of Global Product Development Levi Garraway, MD, said: “We are very pleased that the European Commission has approved Xofluza, which is the first single-dose oral drug for the treatment of influenza. Xofluza will provide patients in Europe with the first single-dose oral drug in nearly 20 years. A new mechanism of anti-influenza drug. With the approval of treatment and post-exposure prevention, we hope that Xofluza can help patients recover faster, while reducing the social burden of influenza, especially in the context of the COVID-19 pandemic.”

Xofluza was discovered by Yoshino Shiono, and jointly developed by Roche and Yoshino Shiono worldwide. According to the agreement, Roche enjoys global rights to the drug in areas other than Japan and Taiwan. So far, Xofluza has been approved for the treatment of influenza A and B in more than 30 countries.

In the United States, Xofluza has approved indications including:

Xofluza is the first and only single-dose oral drug approved for the treatment of influenza and the first new influenza drug with a new mechanism of action in the past 20 years. There is strong clinical evidence that Xofluza has therapeutic benefits for multiple populations (healthy influenza population, population at high risk of influenza complications, children) and treatment settings (symptomatic influenza, post-exposure prevention).
Currently, Xofluza is being evaluated in a phase III clinical development project, including children under one year old (NCT03653364), hospitalized patients with severe influenza (NCT03684044), and evaluating the possibility of reducing the spread of influenza from infected people to healthy people (NCT0396912). 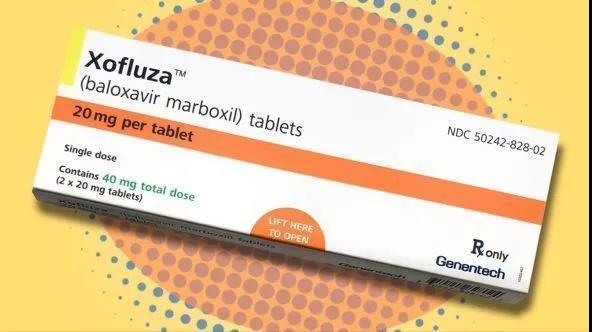 This approval is based on the results of Phase 3 CAPSTONE-1, CAPSTONE-2, and BLOCKSTONE studies.

A total of 1436 healthy patients (age ≥12 years old) diagnosed with influenza were enrolled. A single dose of Xofluza was combined with placebo and anti-influenza drug oseltamivir (trade name: Tamiflu, 75 mg twice a day for 5 Days) were compared. The results showed that compared with placebo, Xofluza significantly shortened the duration of flu symptoms (median time: 53.7 hours vs 80.2 hours, p<0.0001), and significantly shortened the duration of fever (median time: 24.5 hours vs 42.0 hours, p ＜0.0001).

A total of 2184 subjects (age ≥12 years old) at high risk of influenza complications were enrolled. A single dose of Xofluza (40 mg or 80 mg, depending on body weight) was combined with placebo or oseltamivir (75 mg twice a day for 5 days). ) For comparison. The results showed that compared with placebo, Xofluza significantly shortened the time to remission of flu symptoms (median time: 73.2 hours vs 102.3 hours, p<0.0001).

In patients with influenza B, Xofluza showed better efficacy than placebo and Tamiflu (shortening the time to remission of flu symptoms: median time was 74.6 hours, 100.6 hours, and 101.6 hours, respectively, p=0.0138, p=0.0251 ). In addition, compared with placebo, Xofluza significantly shortens the time to fever, reduces the incidence of flu-related complications, reduces the use of systemic antibiotics, and the time to stop virus excretion. Compared with oseltamivir, Xofluza significantly shortens the sustained release time of the virus from the body (median time: 48 hours vs 96 hours, p<0.0001).

In this study, Xofluza was well tolerated, and the overall incidence of adverse events was slightly lower than that of the placebo and oseltamivir groups.

It is a randomized, placebo-controlled, post-exposure prophylaxis study, enrolled in the group are healthy subjects (adults and children) whose family members are confirmed to be influenza-infected by rapid influenza diagnostic tests (ie “index patient [index patient] “). These subjects were randomized to receive a single dose of Xofluza (dose based on body weight) or placebo as a measure to prevent influenza. The primary endpoint was to assess the proportion of subjects who tested positive for influenza virus, had fever, and had one or more respiratory symptoms during the observation period from day 1-10.

The study also showed that even with fewer flu criteria (proportion of participants with flu, fever, or one or more respiratory symptoms) applied, Xofluza significantly reduced the risk of flu for family members by 76% compared with placebo ( 3% vs 22.4%, p<0.0001).

In the study, the safety of Xofuza was comparable to that of placebo, with an adverse event rate of 22.2% in the Xofuza group and 20.5% in the placebo group. Xofuza has no reports of serious adverse events.