Skyrizi: New drug for Rohn’s disease. The new drug: Skyriz is expected to treat Ron’s disease, and the remission rate will be significantly improved.

Crohn’s disease is a chronic, progressive inflammatory bowel disease that occurs in young people aged 18 to 35. Recently, the data of two phase 3 studies of IL-23 inhibitor Risankizumab (Skyrizi) in the treatment of moderate to severe Crohn’s disease in adult patients were announced, which is worth looking forward to.

The results showed that at the 12th week of treatment, the two doses of Risankizumab (600mg, 1200mg) reached the primary endpoints of clinical remission and endoscopic response. 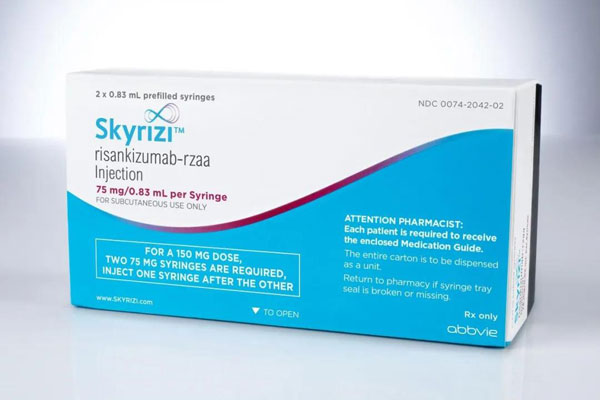 Crohn’s disease usually occurs in young adults, and the peak incidence is usually 18-35 years old. And up to 80% of patients have complications such as intestinal stenosis, fistulas, and abscesses. The disability rate is high, which seriously affects the quality of life of patients. As a long-term chronic disease, it brings a heavy burden to the patient’s psychology and family.

According to good doctors, more than 3.5 million people worldwide suffer from inflammatory bowel disease (IBD), including Crohn’s disease, and the incidence continues to rise.

In recent years, with the continuous development of therapeutic drugs, the clinical efficacy of Crohn’s disease has been greatly improved. Although the current therapies are gradually increasing, there are still many patients who cannot control their diseases and urgently need more effective treatments.

Risankizumab is an interleukin-23 (IL-23) inhibitor that selectively blocks IL-23 by binding to the p19 subunit of IL-23.

IL-23 is a cytokine involved in the inflammatory process and is believed to be related to many chronic immune-mediated diseases including psoriasis and Crohn’s disease.

In April 2019, Risankizumab was approved by the FDA for the treatment of patients with moderate to severe plaque psoriasis who meet the indications for systemic therapy or phototherapy.

▌The clinical trial data is gratifying, and the remission rate is significantly improved!

The ADVANCE and MOTIVATE study is a phase 3, randomized, double-blind, placebo-controlled induction study to evaluate the efficacy and safety of two doses of Risankizumab (600 mg and 1200 mg) in adults with moderate to severe Crohn’s disease.

The complete results of these two studies will be published at an upcoming medical conference and published in medical journals.

In the ADVANCE study, at the 12th week of treatment, patients in the Risankizumab (600mg or 1200mg) group had a significant increase in clinical remission, 45% and 42%, respectively, compared to 25% in the placebo group.

Compared with placebo, the treatment group achieved a significant increase in the proportion of endoscopic treatment response (defined as a reduction of SES-CD relative to baseline ≥ 50%), which was 40% and 32% VS 12%, respectively.

In the MOTIVATE study, 42% and 41% of patients treated with 600mg or 1200mg Risankizumab achieved clinical remission at week 12, compared with 19% in the placebo group;

Among the patients in the Risankizumab treatment group, 29% and 34% of the patients achieved endoscopic remission, compared with only 11% in the placebo group.

In addition, in the two studies, it was also found that patients saw significant improvement in symptoms as early as the fourth week, and the proportion of people who achieved clinical remission and endoscopic response was higher. In the treatment of Crohn’s disease, it is essential to help patients achieve clinical remission and endoscopic response as soon as possible.

These positive results indicate that targeting IL-23 can quickly improve the patient’s condition. We look forward to the new therapies that will bring us more surprises and be approved as soon as possible to reduce the burden on patients with Crohn’s disease.