In the past ten years, CAR-T cell therapy research and clinical trials have achieved great success [3-6]. Although a variety of CAR-T cells targeting different antigens have been developed, CD19-targeted or BCMA-targeted CAR-T cell therapy has been proven to be effective for relapsed/refractory diffuse large B-cell lymphoma, acute lymphotrophication Cellular leukemia or multiple myeloma is most effective [7,8].

However, even in patients with complete remission in the early stage of treatment, there are still a considerable number of patients who relapse after CAR-T cell therapy [9].

Reasons for treatment failure include, but are not limited to, loss of antigen from CAR-T cell transfusion [13,14] and poor durability [12]. There are two main reasons for the poor persistence of CAR-T cells: programmed cell death [15] and failure [12]. T cell depletion is a more complex phenomenon than programmed cell death, and may be affected by many factors, such as the initial state of T cells [17], patient age [18] and tumor microenvironment [19].

The chimeric immune receptor based on FMC63 scFv, followed by 4-1BB and CD3 intracellular domain was constructed into a lentiviral vector back bone construct, and then CAR based on GPC3 scFv, and then 4-1BB and CD3 intracellular structure The domain is constructed as the backbone of the retroviral vector. In both vectors, the CAR sequence is followed by 2A and GFP.

Twenty-four hours after activation, T cells were transduced with the virus. In order to generate classic T1 or Th1/Tc1 CAR-T cells, human CD3+, CD4+ or CD8+ T cells were cultured with recombinant IL2 (Peprotech), added every other day, the final concentration was 100 IU/mL, and the cell density was 0.5× 106-1×106 cells/mL.

First, we defined the hallmark cytokines of T9 CAR-T cells. 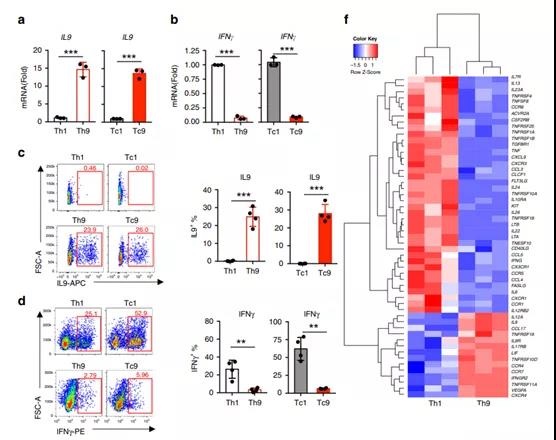 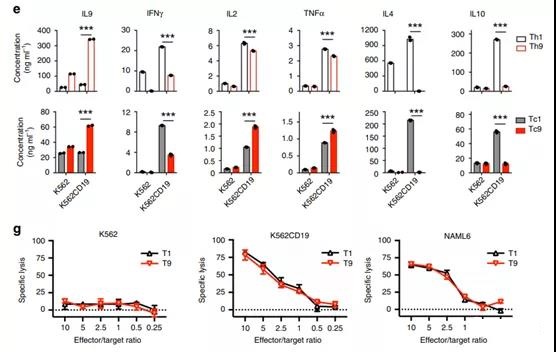 Figure 1. Characterization of T9 CAR-T cell cytokine expression profile. On the 16th day of the in vitro expansion period, CAR-T cells were harvested and analyzed.

We use RNASeq analysis to analyze the transcriptome of human Th9 or Th1CAR-T cells.

We further examined whether the difference in cytokine secretion affects the killing ability of T9 CAR-T cells.

During the in vitro expansion, we observed that the cell size of both CD4+ and CD8+ T cells cultured under Th9 polarization conditions increased, and then decreased cell size at a slower rate than cells polarized under Th1 polarization conditions (Supplement Figure 4), and significantly increased the proliferation ability of Th1 or Tc1 cells (Figure 2a, b). In addition, the proportion of Th9 or Tc9 CAR-T cells stained with the apoptosis marker Annexin V was less than that of Th1 or Tc1 CAR-T cells (Figure 2c). 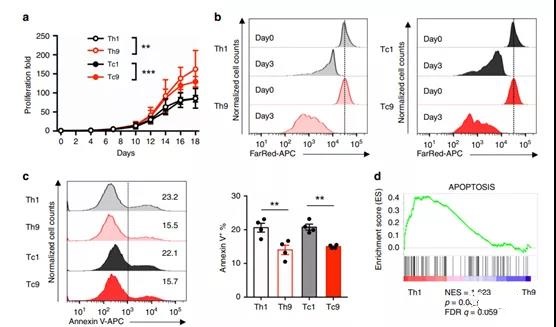 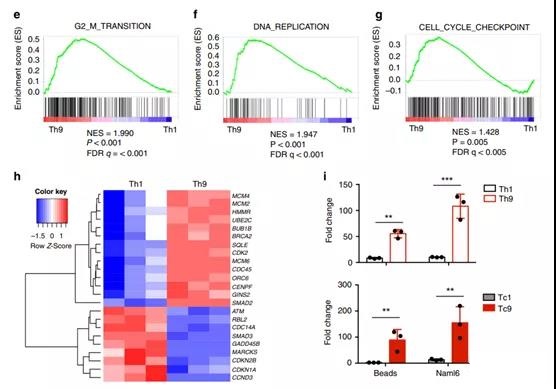 In order to understand the mechanisms leading to the reduction of apoptosis and excessive proliferation of T9 CAR-T cells, genes related to apoptosis, cell cycle and proliferation were analyzed by gene set enrichment analysis (GSEA).

We set out to evaluate the proliferation ability of T9 or T1 CAR-T cells after exposure to CD19-expressing tumor cells (NALM6 cells).

Anti-CD3/CD28 beads were used as a control. T9 and T1CAR-T cells were co-cultured with designated tumor cells at a ratio of 1:1. After four days, use CountBright™ absolute counting beads to count gated GFP+ CD3+ CD4+ (Th9) or CD8+ (Tc9) CAR-T cells. Th9 and Tc9 CAR-T cells both showed strong proliferation ability in culture with anti-CD3/CD28 beads or NALM6 cells, at least 5 times higher than their corresponding Th1 and Tc1 CAR-T cells (Figure 2i).

These results were confirmed by flow cytometry to examine the expression of CCR7 and CD45RO on CD4+ and CD8+ T cells after 16 days of in vitro expansion. Compared with their counterparts, T9 CAR-T cells maintain a higher proportion of CCR7+CD45RO+ Tcm cells, while T1 CAR-T cells have a larger population of CCR7-CD45RO+ Tem cells (Figure 3c, d). 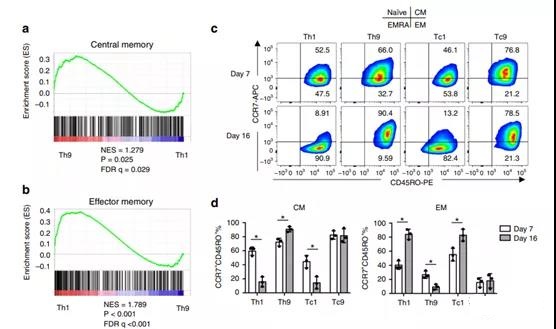 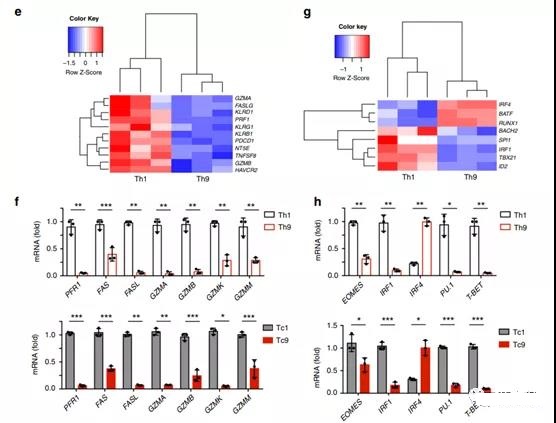 We also analyzed the fatigue-related genes of T cells using RNASeq data and found that JUN31, which is reported to induce fatigue tolerance in CAR-T cells, is highly expressed in Th9 but not Th1 CAR-T cells (Supplementary Figure 6a).

To confirm this result, Western blot analysis was performed on Th9 CAR-T cells expanded on the 14th day. The results showed that Th9 cells not only showed higher c-jun expression at Ser73, but also c jun phosphoric acid. (Supplementary Figure 6b).

Next, in order to determine which cytokine played a major role in shaping the characteristics of T9 CAR-T cells, we polarized CD3+CAR-T cells under four different conditions (None, IL4, TGFβ, IL4+TGFβ) . IL2 was added to all cultures to support T cell survival and growth. The results showed that TGFβ alone induced the expression and phosphorylation of c-jun (Supplementary Figure 6c) and the expression of CCR7 (Supplementary Figure 6d).

It has been shown that Tcm cells have significantly enhanced breathing ability [32].

Given the observed phenotype and proliferation ability of T9 CAR-T cells, we will next investigate whether T9 CAR-T cells have enhanced anti-tumor capabilities in vivo. NALM-6 tumor cells were injected intravenously into NSG mice, and when tumor burden appeared 7 days later, the mice received 4×106 CD3+ T9 or T1 CAR-T cells through the tail vein (Figure 4a). Compared with T1 CAR-T cells (Figure 4d), T9 CAR-T cells are more effective in reducing tumor burden (Figure 4b, c) and prolonging the survival rate of tumor-bearing mice. 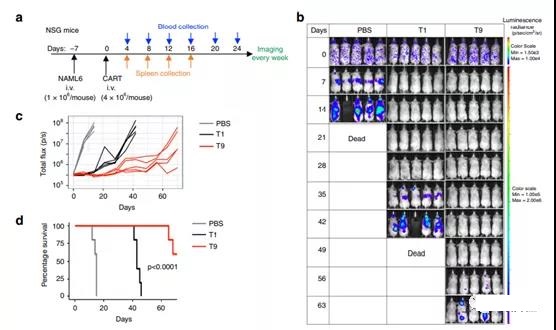 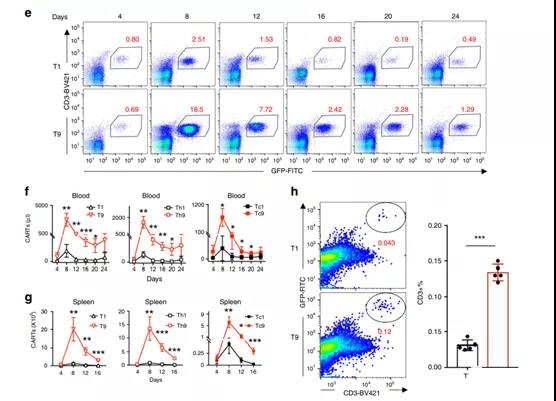 In order to clarify the potential mechanism of T9 CAR-T cells with significantly higher anti-tumor ability in vivo, we first evaluated the persistence of these cells in vivo by analyzing the presence and quantity of CAR- in the blood and spleen (the main tumor infiltrating organ). Sex. T cells change over time as the tumor grows.

Flow cytometry analysis showed that in the peripheral blood (days 4 to 24) (Figure 4e, f) and spleen (days 4 to 16) (Figure 4g), the absolute number of CD3+ (Figure 4f, g) (left Picture) or CD4+ (middle picture) and CD8+ (right picture) in mice treated with T9 CAR-T, CAR-T cells were significantly higher than those treated with T1 CAR-T cells. In addition to the spleen, NALM6 cells are also transferred to the bone marrow33. Therefore, we checked the infiltration of CAR-T in the bone marrow and observed that on day 8 after metastasis, more T9 (compared to T1) CAR-T cells were found in the bone marrow of tumor-bearing mice (Figure 4h). These results indicate that T9 CAR-T cells have better persistence and tumor infiltration ability, and thus have greater anti-tumor efficacy in vivo.

In order to determine which type of CAR-T cells are more effective in anti-tumor effects in vivo, we isolated human CD4+ and CD8+ T cells, polarized them under Th9 or Th1 culture conditions, and then injected them into tumor-bearing cells. In the mouse (Supplementary Figure 8a). 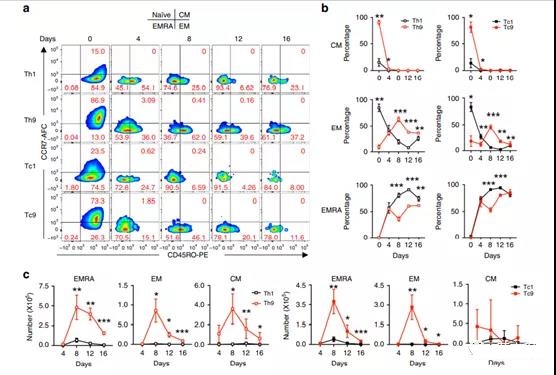 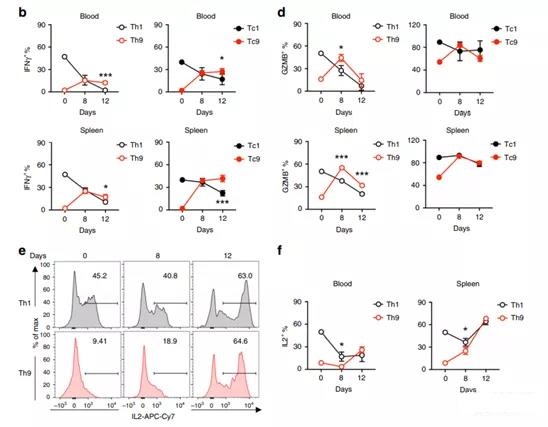 Human T9 CAR-T cells evolved into effectors, but there are still fewer depleted T cells in the body.

After determining that T9 CAR-T cells have evolved into Th1-like effector T cells, we explored whether they still exhibit a mature phenotype similar to T1 CAR-T cells. We analyzed the CAR-T cell phenotype by examining the expression levels of CCR7 and CD45RO on the 4th to 16th day after transfer. 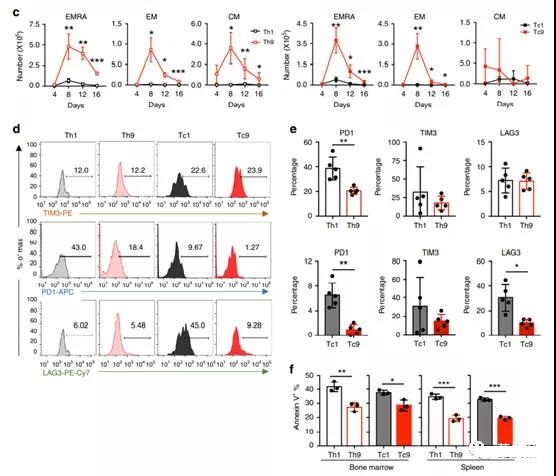 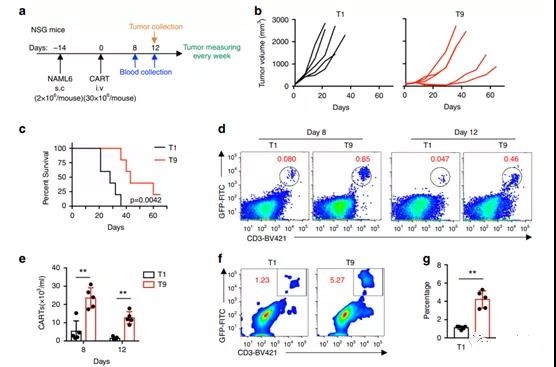 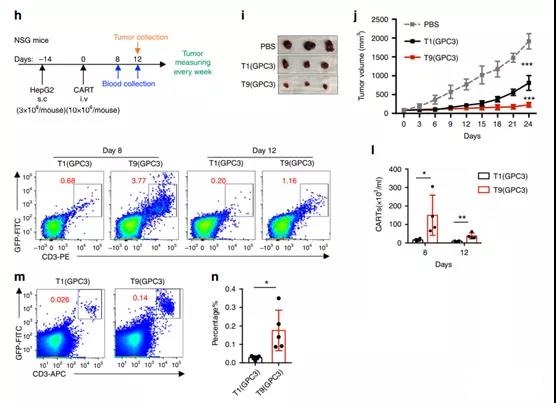 Finally, we studied the efficacy of T9 CAR-T cells in the treatment of solid tumors. We established a solid tumor model by subcutaneously injecting NALM6 cells into NSG mice. After 14 days, the tumor-bearing mice were treated with CAR-T cells (Figure 7a). Compared with T1 CAR-T cells, T9CAR-T cells significantly inhibited the growth of tumors (Figure 7b) and improved the overall survival rate of mice (Figure 7c). 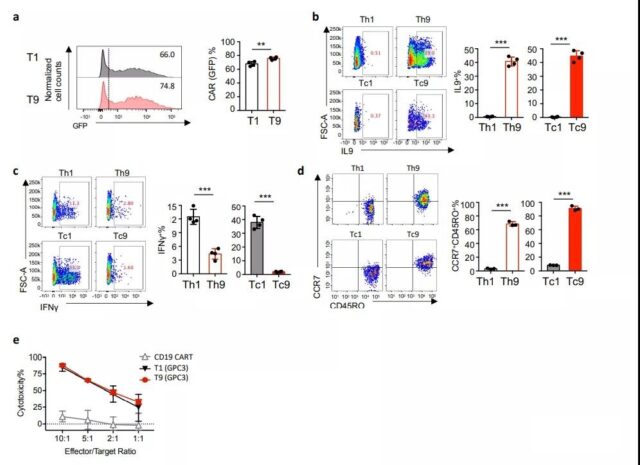 In order to determine the anti-tumor activity of T1 and T9 GPC3 CAR-T cells, we first performed an in vitro cytotoxicity test.

All in all, these data indicate that tumor-specific T9 CAR-T cells may be able to mediate effective anti-tumor immunity against solid tumors due to their strong proliferation ability and better tumor infiltration ability.