An Indonesian airport reuses nasal swabs for detection of COVID-19, which may affect nearly 10,000 passengers

An Indonesian airport reuses nasal swabs for detection of COVID-19. On May 6, CNN announced that the Indonesian police announced that nearly 10,000 air passengers may have been tested for coronavirus through repeated use of nasal swabs, and criminals made thousands of dollars in profits.

On April 27, five employees of the Indonesian pharmaceutical company Kimia Farma were arrested on suspicion of washing and repacking the nasal swab kit and using it for passengers at Kualanamu International Airport in Medan, North Sumatra.

Indonesia requires all passengers to provide a negative coronavirus test before boarding a domestic flight, and the company sells test kits at Kualanamu International Airport.

It is reported that the scam has lasted about four months. North Sumatra Police spokesman Hadi Wayudi said the authorities are still investigating the number of victims affected by the reuse of cotton swabs. 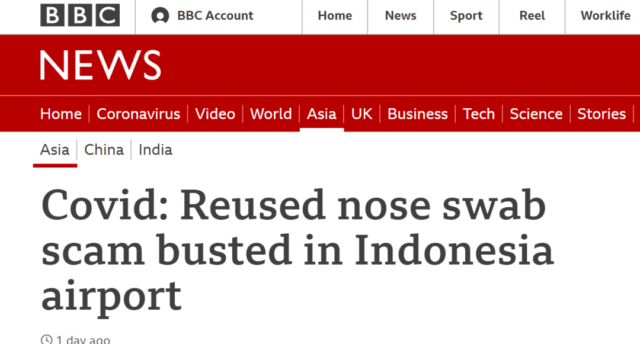 At the same time, BBC sources said that according to the local police’s preliminary estimates, they had collected a total of 1.8 billion Indonesian rupiah (about 807,000 yuan) in illegal profits. The cost of each test is 200,000 Indonesian rupiah (about 90 yuan), which means that there may be nearly 10,000 passengers affected by this. (Source: CNN, BBC)

At least 20 climbers in Everest Base Camp have severe coughs

The BBC recently reported that some climbers who climbed Dhaulagiri and Mount Everest in this spring mountaineering season had symptoms of suspected COVID-19 pneumonia. 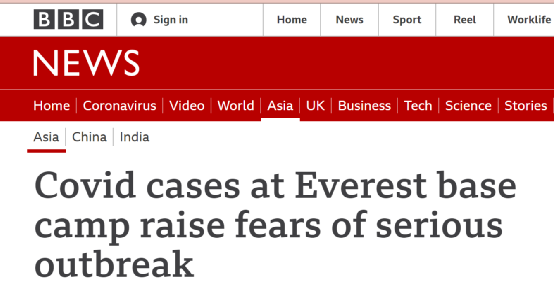 According to the news, on May 4, local time, the four Nepalese Sherpa climbing collaborators who withdrew from the Dhaulagiri base camp to Kathmandu were tested for the COVID-19 virus on the 5th, and the results were positive, which further aroused people’s concerns about climbing Mount Everest Including the concerns of the climbing teams.

In an interview with local media, Nepal’s most well-known mountaineering and expedition organization-Seven Peaks Trekking Company Chairman Mingma Shalpa said: “This week there is no report on the diagnosis of COVID-19 pneumonia at the Everest Base Camp, but we cannot say that Mount Everest has been confirmed. The area is completely safe.”

An official from the Himalayan Rescue Association revealed that at least 20 climbers were found to have “severe coughs” in the Everest base camp.

However, it is currently uncertain whether it is caused by the common “Kombu cough” in high mountain areas or the new coronavirus pneumonia, because in both cases, the lungs are filled with fluid and the symptoms of the patients are similar.