Apellis Pharmaceuticals recently announced that the U.S. Food and Drug Administration (FDA) has approved Empaveli (pegcetacoplan) for the treatment of paroxysmal nocturnal hemoglobinuria (PNH) in adults. Empaveli was approved through the priority review process, which has the potential to improve PNH care standards and redefine PNH treatment.

In the past decade or so, the only option to treat PNH was C5 inhibitors, but many patients still experience persistent hypohemoglobinopathy, which often leads to debilitating fatigue and frequent blood transfusions. In clinical trials, Empaveli can provide extensive control of PNH, improving the lives of PNH patients by increasing hemoglobin levels and reducing the need for blood transfusions.

Cedric Francois, MD, co-founder and CEO of Apellis said: “As the first C3 targeted therapy approved by the FDA, Empaveli has the potential to redefine the treatment of adult patients with PNH, including those who have not received treatment, and from C5 Inhibitor-switched patients. This approval represents a major scientific advance, because Empaveli pioneered the first new complement drug in the past 15 years. We look forward to exploring the full potential of C3 as a target and continue Promote the registration plan for this therapy in a variety of complement-driven diseases, where there are significant unmet medical needs.”

Empaveli’s approval is based on the results of a head-to-head phase 3 PEGASUS study (NCT03500549) (see: PEGASUS Phase 3 Top-Line Results Conference Call Presentation). The study reached the primary endpoint, demonstrating that Empaveli is superior to Soliris (eculizumab), the PNH standard of care drug: it is superior to Soliris in terms of changes in hemoglobin levels from baseline levels at week 16, and the adjusted hemoglobin levels increase by an average of 3.84g/dL <0.0001).

It is worth mentioning that Empaveli is the first therapy to show superior hemoglobin levels than Soliris, and up to 85% of patients treated with Empaveli do not have blood transfusions. Most of the PNH patients currently receiving Soliris treatment suffer from persistent anemia. The results of the PEGASUS study show that Empaveli has the potential to become a new standard of care for PNH patients. 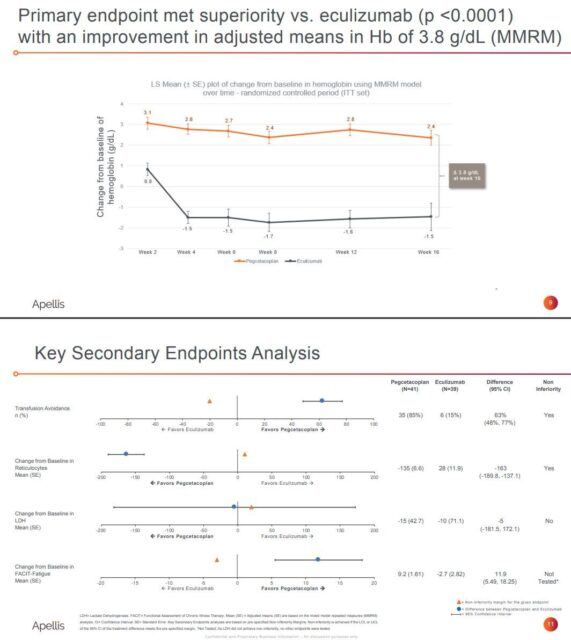 The active pharmaceutical ingredient of Empaveli is pegcetacoplan, which is a targeted C3 inhibitor designed to regulate the excessive activation of complement, which is the cause of the occurrence and development of many serious diseases. Pegcetacoplan is a synthetic cyclic peptide that binds to a polyethylene glycol polymer and specifically binds to C3 and C3b. Currently, pegcetacoplan is being developed to treat a variety of diseases, including PNH, geographic atrophy (GA) and C3 glomerulopathy. In the United States, the FDA has granted pegcetacoplan fast track qualification for the treatment of PNH and GA.

Soliris is a drug sold by Alexion. This is a pioneering complement inhibitor that works by inhibiting the C5 protein in the terminal part of the complement cascade. The complement cascade is part of the immune system, and its uncontrolled activation plays an important role in a variety of serious rare diseases and super rare diseases. Soliris was first approved for listing in 2007, and has been approved for a variety of super rare diseases, including: paroxysmal nocturnal hemoglobinuria (PNH), atypical hemolytic uremic syndrome (aHUS), anti-AchR antibody-positive systemic gravis Asthenia (gMG), anti-aquaporin-4 (AQP4) antibody-positive neuromyelitis optica spectrum disorder (NMOSD).

Ultomiris is an upgraded version of Soliris. It is a second-generation, long-acting C5 complement inhibitor. It was first approved for marketing at the end of 2018. The approved indications include: PNH and aHUS. Ultomiris is the first and only long-acting C5 complement inhibitor to be administered every 8 weeks. In a phase III clinical study for the treatment of PNH, Ultomiris is infused every 2 months (8 weeks) with Soliris every 2 The weekly infusion achieved non-inferiority in all 11 endpoints.

Soliris is one of the world’s best-selling rare disease drugs, with sales in 2020 reaching US$4.065 billion. Ultomiris’s sales in 2020 have reached 1.077 billion US dollars. The total sales of the two C5 inhibitors amounted to US$5.142 billion.

In December 2020, AstraZeneca announced the acquisition of Alexion for $39 billion in cash and stock. The acquisition will enhance AstraZeneca’s scientific position in the field of immunology by bringing Alexion’s innovative complement technology platform and powerful pipeline. Rare diseases are a high-growth and rapidly innovating disease field, and medical needs are seriously unmet. In April of this year, the acquisition successfully passed the review of the US Federal Trade Commission (FTC). Just recently, the acquisition was approved by AstraZeneca’s majority shareholders and is expected to be completed in the third quarter of 2021.