According to the introduction at the 2019 International Drug Week conference in Washington, DC, among patients with highly drug-resistant viruses, access to drugs through expanded access programs The treated patients have suppressed HIV for 48 weeks.

Ibalizumab does not directly attack HIV, but targets a protein on human cells. Theratechnologies, the company that developed the drug, calls it a post-attachment HIV inhibitor. It binds to the CD4 receptor on the surface of T cells and interferes with the changes in protein morphology required for virus entry. Ibalizumab is infused intravenously every two weeks. It is the first biological agent approved for the treatment of HIV and the first antiretroviral drug that does not require daily administration.

Ibazizumab (TMB-355, formerly known as TNX-355) has been developed for more than ten years and was approved by the U.S. Food and Drug Administration in March 2018 for use by people with limited options. Dressing change and carrying multi-drug resistant virus. In July 2019, it received a positive evaluation from the European Medicines Agency.

Researchers from Harrison University School of Pharmacy in Auburn, Arizona, USA published an article in Sage. The article believes that in recent years, the treatment of HIV infection has undergone revolutionary changes. The efficacy and tolerability of antiretroviral drugs (ARVs) are better than ever before, which increases the life expectancy of HIV-infected people.1 Despite these advances in treatment, people with multidrug resistance (MDR) strains are often unable to maintain an undetectable viral load in the routinely recommended antiretroviral therapy (ART), so treatment options are limited .

In the United States, there are an estimated 1.1 million HIV-infected people and an estimated 25,000 patients with the MDR strain, of which about 12,000 patients need new antiretroviral drugs because of the failure of previous treatment regimens. Resistance to nucleoside/nucleoside reverse transcriptase inhibitors (NRTIs) and non-nucleoside reverse transcriptase inhibitors (NNRTIs) seems to be the highest, while resistance to protease inhibitors (PIs) is low; to integrase The resistance rate of chain transfer is low.

From a pharmacological perspective

IBA acts as a post-attachment inhibitor by preventing HIV from infecting CD4 cells. Compared with other drugs for the treatment of HIV, this is a new mechanism of action. The virus is composed of a trimeric envelope glycoprotein (gp) that contains gp120 and gp41 domains. The entry of HIV into CD4 cells occurs through the interaction of gp120 and CD4 extracellular domain 1. IBA binds to the amino acid positions E77 and S79 on the extracellular domain 2 and domain 1 of CD4.

These two sites are located at the interface between domains 1 and 2, and are related to the gp120 and main tissues on domain 1. The capacitive complex-II (MHC-II) binds to the opposite site. IBA causes a steric hindrance to prevent the occurrence of conformational transfer, thereby preventing HIV from entering CD4 cells. IBA does not interfere with MHC-II-mediated immunity because its binding site is physically separated from the MHC-II binding site on domain 1.

Similar to other antiretroviral drugs, virus resistance to IBA may also occur. The main resistance mechanism is the decrease in the expression of potential N-linked glycosylation sites (PNGS) in gp120, especially the V5 loop that exists on the outside of gp120.

In addition, in a phase 3 trial, there was clinical development of drug resistance and subsequent treatment failure.

The pharmacokinetics of IBA is non-linear after a single dose of 0.3 to 25 mg/kg. The increase in the maximum serum concentration (Cmax) is proportional to the dose, and is opposite to the increase in the area under the concentration-time curve, which is proportional to the dose. When administered intravenously (IV), a loading dose of 2000 mg, followed by a secondary dose of 800 mg every 2 weeks, reaches a steady-state concentration after the first 800 mg dose. At doses of 10 and 25 mg/kg, the half-lives were 37.8 and 64.1 hours, respectively. When administered as a usual maintenance dose, the half-life is 72 to 84 hours. The concentration of IBA is inversely proportional to weight gain, although this is unlikely to have clinical significance. Similarly, it is believed that kidney and liver damage will not change IBA exposure, although no studies have been conducted to examine the effect of kidney or liver damage on the pharmacodynamics of IBA.

The antiviral activity of IBA is directly related to the degree of CD4 receptor coating during the interval between doses. When the IBA serum concentration is >5 µg/mL, complete receptor coating can be seen; when the concentration is 0.5 to 5 µg/mL, partial coating can be seen; when the concentration is <0.5 µg/mL, receptor solution can be seen. package. According to the recommended medication regimen of 2000 mg once, 800 mg every 2 weeks, the percentage of patients with a CD4 cell receptor occupancy rate of 85% or higher on day 21 and week 25 was 97% and 81%, respectively. Similarly, when IBA is used in combination with other ARVs, including other entry inhibitors, there seems to be no antagonistic effect. When IBA is combined with enfuvirtide, it actually shows synergistic activity in vitro.

What about clinical trials?

Researchers have conducted some clinical trials to determine the choice of dosage regimen and evaluate the effectiveness and safety of IBA in achieving and maintaining viral suppression in HIV-1 patients.

The two phase 2 trials are unpublished data, and the information about the trials is collected from conference materials. TNX-355.03 included 82 treatment-experienced adults (71 men, 11 women) who were resistant to HIV-1 infection.

≥The primary endpoint is the decrease in mean viral load from baseline to week 24. Participants were randomly assigned to accept one of the following options. IBA 10 mg/kg per week for 8 weeks, then 10 mg/kg every 2 weeks; IBA 15 mg/kg every 2 weeks; or placebo. All participants received an optimized background treatment regimen (OBR), with at least one other drug that showed HIV sensitivity, although the OBR regimen was not specified in the existing meeting minutes.

TMB-202 included 113 HIV-1 infected adults (101 males and 12 females) who had experience in treatment and had HIV-1 RNA levels ≥1000 copies/ml, and they were resistant to ≥1 NRTI, NNRTI, or PI Drug resistance is documented. All participants received OBR, and as in the previous trial, the investigator was not specified. The average baseline viral load was 124 859.8 copies/ml, and the average CD4 count was 109 cells/mm. The main result is the proportion of patients with HIV RNA levels <50 copies/mL at week 24.

The average increase in the number of CD4 cells in each group from baseline was 37 and 40 cells/mm3, respectively. Pharmacokinetic analysis shows that IBA 2000 mg can achieve a faster maximum drug exposure, and 800 mg every 2 weeks can provide a more stable drug exposure within 24 weeks. The results of this trial led to further development using an 800 mg dosage regimen every 2 weeks.

During the 23-week maintenance period, participants received a maintenance dose of 800 mg of IBA intravenously every 2 weeks starting on day 21, and also received an OBR starting on day 14. OBR is determined based on the patient’s treatment history and genotype and phenotypic characteristics, and may include investigational drugs. The primary endpoint is the proportion of participants with a decrease in HIV-1 RNA levels of ≥0.5 log10 copies/ml from day 7 to day 14. The secondary endpoint was the average change in HIV-1 RNA levels on day 14, and the proportion of participants whose HIV-1 RNA levels dropped by ≥0.5 log10 copies/mL or ≥1.0 log10.

The HIV-1 RNA level was <50 copies/ml or <200 copies/ml at the 25th week, and the average change in viral load and CD4 count at the 25th week. A total of 40 participants (34 males, 6 females) received ≥1 dose of IBA treatment and were included in the intention-to-treat population. Of these participants, 32 (80%) received all scheduled doses, and 31 (78%) completed all scheduled visits. Of the 9 participants who did not complete the study, 4 died of causes unrelated to IBA, 1 discontinued treatment due to immune recombination inflammatory syndrome, 4 due to doctor withdrawal, non-adherence to the study protocol, withdrawal of consent and loss of follow-up And discontinue treatment. The median age of the participants was 53 years; 85% were male; 55% were white; the average age after being diagnosed with HIV was 20 years; the average viral load was 4.5 log10 copies/ml; the average number of CD4 cells was 150 cells/mm 3.

This analysis shows that sensitivity to Donald Gravey plays an important role in achieving viral suppression and supports the use of IBA in combination with one or two fully active ARVs.

Researchers pointed out that IBA, like many other monoclonal antibodies, warns of the occurrence of hypersensitivity reactions, including infusion-related reactions and allergic reactions, which can be manifested as dyspnea, angioedema, wheezing, chest pain, chest tightness, cough, and hot flashes. , Nausea and vomiting. If these symptoms and signs appear, IBA treatment should be stopped and appropriate treatment should be started. Like other antiretroviral drugs, IBA also has warnings about the development of immune-recombinant inflammatory syndrome, and like other biological agents, immunogenicity problems may occur.

However, there are insufficient data to determine the safety of IBA during pregnancy, and health care professionals are encouraged to register women who have been exposed to IBA during pregnancy in the pregnancy registry. Despite this, human immunoglobulin G exists in breast milk, but it does not enter the baby’s circulatory system in large quantities. Nevertheless, according to the recommendations of the US Centers for Disease Control and Prevention, in the US, mothers infected with HIV should not breastfeed their babies to avoid the risk of HIV transmission.

Safety data from small clinical trials show that IBA is safe and well tolerated. The following table lists common adverse reactions that occurred in participants who received IBA in clinical trials. Generally speaking, the rash appears within 1 to 3 weeks after taking IBA for the first time, is mild to moderate in intensity, and disappears within 1 to 3 weeks after continuing to take IBA. 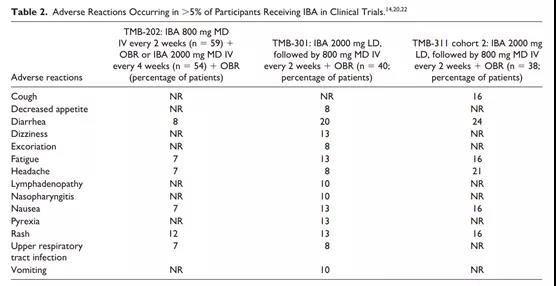 Although contemporary antiretroviral therapies have enabled many HIV-infected people to use a convenient once-daily single-tablet regimen to obtain long-lasting viral suppression, it is often difficult for people with MDR HIV infection with treatment experience to use currently available antiretroviral drugs And maintain virus suppression. IBA is a new agent with a unique mechanism of action and a non-overlapping drug resistance model. It is a choice for the construction of antiretroviral programs, which can effectively and persistently inhibit virus replication, restore and maintain this difficult-to-treat patient population. Immune Function.

The DHHS guidelines on the use of ARVs in adult HIV patients recommend that for patients who cannot achieve an undetectable viral load due to drug resistance, a new treatment plan with at least two fully active drugs should be initiated. IBA is an effective, safe and well-tolerated option. It is used in combination with OBR and is suitable for patients with MDR HIV-1 infection who have a lot of experience in treatment. In these patients, the 5-year survival rate increased from 38% with OBR alone to 47% with IBA plus OBR. There is no dose adjustment for patients with impaired renal function, and it is not helpful for patients with chronic kidney disease and patients receiving drugs that interact with oral antiretroviral drugs to understand major drug interactions.

Finally, the author believes that IBA provides an effective option for HIV-1 infected adults who have failed antiretroviral therapy and have a lot of treatment experience. For those patients who cannot achieve viral suppression by oral antiretroviral drugs alone and can persist in infusion therapy every 2 weeks, IBA is an attractive option.

The efficacy and durability of this approach were observed in a small phase III clinical trial, followed by an extended study through an extended access protocol that showed the risk of virological failure in this difficult-to-treat patient group is acceptable. Common adverse reactions of IBA include diarrhea, dizziness, nausea and rash.

There may be hypersensitivity reactions, infusion reactions, immune reconstitution inflammatory syndrome, and the development of antibodies to IBA. Patients who take OBR and need additional medications to achieve and maintain viral suppression may benefit from IBA.