bemarituzumab (anti-FGFR2b monoclonal antibody) is developed by Five Prime Therapeutics At the beginning of March this year, Amgen announced that it had reached a final agreement with Five Prime to acquire the latter’s shares in cash at a price of $38 per share, corresponding to a total equity of approximately $1.9 billion.

On April 16, Amgen announced that the acquisition has been successfully completed. In addition to bemarituzumab, Five Prime’s pipeline also complements Amgen’s tumor pipeline.

It is worth mentioning that bemarituzumab is the second oncology asset that Amgen has obtained BTD qualification in the past 6 months after sotorasib.

Globally, there are more than 1 million newly diagnosed gastric cancer cases each year, and the disease is particularly common in Asia. About 80%-85% of patients with advanced gastric cancer and GEJ cancer are HER2-negative, and about 30% of them show FGFR2b overexpression.

As a first-line treatment, bemarituzumab has shown a key endpoint in patients with advanced gastric cancer or gastroesophageal cancer. Clinical significance.

Amgen looks forward to further research on the role of FGFR2b, and will continue to cooperate with regulatory agencies to take the next step to provide patients with this potential first-line treatment.” 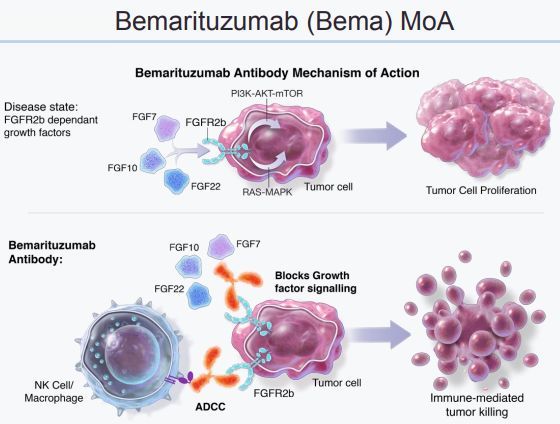 bemarituzumab is a first-in-class targeting antibody that prevents FGF from binding and activating FGFR2b, inhibits a variety of downstream pro-tumor signaling pathways, and may delay cancer progression.

Currently, bemarituzumab is being developed in gastric cancer and GEJ cancer as a targeted therapy for FGFR2b overexpressing tumors.

Five Prime is also evaluating the potential of bemarituzumab in other FGFR2b overexpressing tumors.

The FDA granted bemarituzumab BTD based on the results of this Phase 2 FIGH trial. This is a global, randomized, double-blind, placebo-controlled study in newly diagnosed fibroblast growth factor receptor 2b positive (FGFR2b+), non-HER2 positive, advanced gastric or gastroesophageal junction (GEJ) cancer patients To evaluate the efficacy and safety of bemarituzumab and placebo combined with chemotherapy (mFOLFOX6) for first-line treatment. The trial enrolled 155 patients in 15 countries in Asia, the European Union, and the United States, of which 77 were randomly assigned to the bemarituzumab treatment group (bemarituzumab+mFOLFOX6), and 78 patients were assigned to the placebo group (placebo+mFOLFOX6). 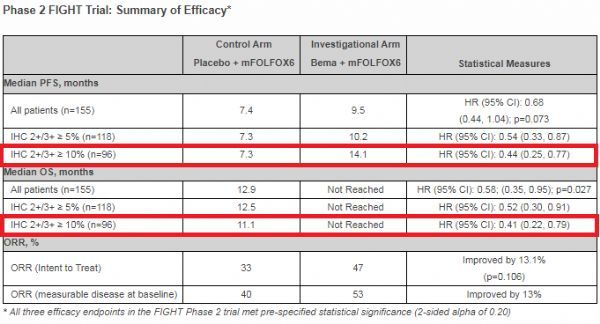 The results showed that in the patient population with at least 10% of tumor cells overexpressing FGFR2b, compared with the placebo group, patients in the bemarituzumab group showed progression-free survival (PFS) primary endpoints and overall survival (OS) secondary endpoints.

A clinically significant and substantial improvement. Additional analysis showed that treatment benefit was positively correlated with the percentage of FGFR2b+ tumor cells, confirming the importance of the FGFR2b target and the activity of bemarituzumab on this target.