In a new study, researchers from the Yale School of Public Health in the United States used inbound flight data from the United Kingdom and other countries severely affected by the SARS-CoV-2 B.1.1.7 variant to report this variant for the first time The number and degree of transmission in the United States.

The relevant research results were published in the Cell Journal on May 13, 2021, with the title of the paper “Early introductions and transmission of SARS-CoV-2 variant B.1.1.7 in the United States”.

These authors used statistical models to predict that due to the large number of passengers at major U.S. airports such as New York, California, Florida, Texas, New Jersey, and Massachusetts, these states face the highest risk of introduction of the British B.1.1.7 variant.

The B.1.1.7 variant is considered to be more transmissible and toxic than the original virus that caused the COVID-19 pandemic. By December 2020, the variant was found to have established and spread in the United States. These authors performed advanced systematic geographic analysis of genomic data to obtain their findings.

Detecting worrying new variants before they become the dominant pandemic strain is the key to controlling this pandemic. Such large-scale monitoring requires extensive cooperation and partnership. 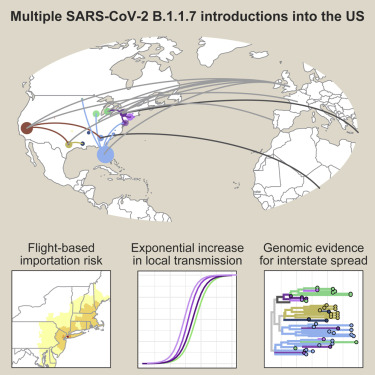 These authors also used COVID-19 test data from nearby states (Connecticut, New York, New Jersey, and Illinois) to predict the exponential growth of B.1.1.7 in each U.S. state using a logistic growth model. As local and international travel continues, states that do not have genome monitoring capabilities may not perceive the emergence and circulation of worrying variants.

These findings indicate that certain states need to significantly increase the speed of testing and genome sequencing in order to detect this variant before the surge in cases begins.

This research requires extensive cooperation from many laboratories from Yale University and other research institutions to conduct sample collection and sequencing, as well as data aggregation and analysis. These authors stated that they urgently need to publish their findings quickly in order to assist in the development of public health guidelines in the most influential way.

As SARS-CoV-2 infects more people, mutations may cause variants of this virus to spread more easily, evade neutralization by antibodies, or become more toxic. These authors are continuing to work with the U.S. Centers for Disease Control and Prevention (CDC) and local health departments and hospitals to monitor the emergence of the SARS-CoV-2 variant.

With the promotion of vaccination, these authors are also exploring the situation of vaccine evasion. This evasion may be caused by existing or new SARS-CoV-2 variants, and these variants may appear with the reopening of states.