PNAS: Why is the chemotherapy drug decitabine only effective for some patients?

Why is the chemotherapy drug decitabine only effective for some patients?  DNA methyltransferase inhibitors (DNMTis, DNA-methyltransferase inhibitors), such as azacitidine and decitabine, are usually used clinically to treat myelodysplastic syndrome (MDS) and acute myelogenous leukemia (AML) ), Decitabine can activate the transcription of endogenous retroviruses (ERVs), which can induce the body to produce an immune response by acting on double-stranded RNAs (dsRNAs) in cells.

However, the post-transcriptional regulatory mechanism of ERV dsRNAs Researchers are not clear at present.

The chemotherapy drug decitabine can usually be used to treat blood cancer patients, but its response rate is relatively low. Now, an article published in the international journal PNAS entitled “Noncanonical immune response to the inhibition of DNA methylation by Staufen1 via stabilization” of endogenous retrovirus RNAs” research report, scientists from Korea Advanced Institute of Science and Technology and other institutions revealed the reasons, which may provide a new way for the later development of new and personalized anti-cancer therapies to treat related types of cancer. Clues and ideas.

In this research report, the researchers identified how the special genetic and molecular mechanisms in cells make the chemotherapy drug decitabine only effective for some patients; relevant research results may help clinicians choose more specific to different patients Therapeutic means. Decitabine, or dackin, can act by modifying the body’s DNA to turn on the expression of genes that block cancer cell growth and replication.

However, the response rate of Decitabine is low (only 30%-35 % Of patients have improved their disease), which may leave some mystery as to why the drug is only effective for some patients. In order to clarify the reason or mechanism, the researchers in the article investigated the molecules involved in regulating the effects of the drug. Mediator.

Decitabine can activate the production of endogenous retroviruses (ERVs), thereby inducing the body’s immune response. ERVs are viruses that have inserted their dormant copies into the human genome a long time ago; essentially In other words, decitabine can reactivate these viral elements and produce dsRNAs, allowing the immune system to treat them as foreign bodies.

Researcher Yoosik Kim pointed out that, however, the mechanisms involved in this process, especially how the production and transport of these ERV dsRNAs are regulated in cells, have not been studied in depth by the researchers. Therefore, in order to explain why decitabine plays a role in some patients, the researchers investigated the key molecular mechanisms.

The researchers used image-based RNA interference (RNAi) screening technology, which is a relatively new technology that can cause specific genes in the genome to be knocked out or down-regulated in cultured cells or living organisms The large-scale screening technology carried out in China can help investigate the functions of different genes; in addition, the researchers also analyzed the effect of down-regulated genes to identify ERV dsRNAs, which may be involved in the cellular response to decitabine.

Based on these preliminary screening results, the researchers conducted a more detailed down-regulation screening analysis. Through the screening, they identified two special gene sequences, which may be involved in the production of the RNA-binding protein Staufen1, and one In the production process of TINCR, an RNA sequence that does not produce any protein, TINCR plays a key regulatory role in helping the body respond to drugs; Staufen1 can directly bind to dsRNAs and cooperate with TINCR to stabilize these dsRNAs. 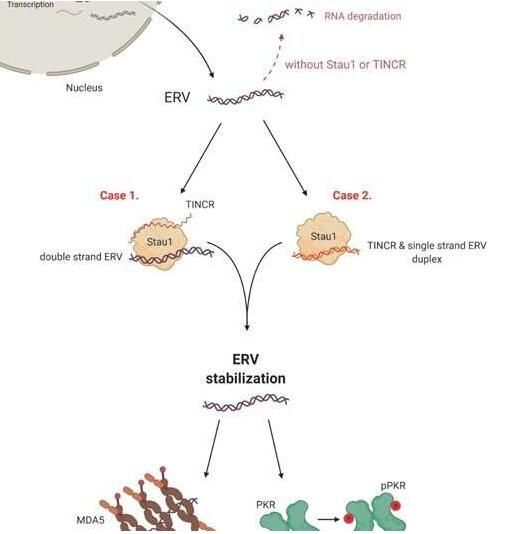 Schematic diagram of the molecular mechanism of the chemotherapeutic drug Decitabine.

If the patient’s body does not produce enough Staufen1 and TINCR, then the dsRNA virus mimics will find them in the immune system to be rapidly degraded, and for cancer treatment, this means that patients with lower expression levels may be on the ground. Citabine has a poor response. In fact, researchers have found that MDS/AML patients with low expression of Staufen1 and TINCR will not benefit from decitabine therapy.

The first author of the article, Yongsuk Ku, said that now we can screen patients who will not benefit from the therapy and guide these patients to receive different types of therapies, and this may be a key step towards the development of specific therapies for these patients. .

Since the researchers use samples from the bone marrow of patients for research, the next step they will try to design new detection technology to identify problems in blood samples, because blood samples are easier to obtain from patients. At the same time, the researchers also plan to investigate whether this analysis can be extended to patients with solid tumors other than the above-mentioned blood cancers.

In summary, this study revealed the post-transcriptional regulatory mechanism of ERVs, and also identified the Stau1-TINCR complex as a potential target to predict the efficacy of DNMTis and other drugs that rely on dsRNAs.