The latest review of CAR-T treatment of cancers

The latest review of CAR-T treatment of cancers.  Immunotherapy can be considered as a promising method to treat various diseases such as cancer, autoimmune diseases, allergies and hypersensitivity diseases. CD8+ T lymphocytes play a key role in tumor eradication.

The use of CAR has many advantages. For example: CAR protein recognizes TAA in a manner independent of the major histocompatibility complex (MHC). Therefore, this feature enables T cells to overcome tumors’ ability to evade immune recognition by down-regulating MHC. Molecules on the surface.

Regardless of the type of MHC, the use of CAR is applicable to a wide range of patients, because tumor targeting is not limited to MHC molecules. CAR protein can recognize any cell surface antigen, including proteins, carbohydrates and glycolipids. Compared with natural TCR, these receptors enable genetically modified T cells to respond to a wider range of molecules.

T cell engineering for expressing CAR protein can redirect the specificity of most T cell populations, including CD4, CD8, naive and memory or T cell effectors. This is very important because the initial T cells and the T cells experienced by the antigen have different functions, which can make them more or less effective for adoptive cell therapy.

CAR modification may involve one or more T cell activation signals related to the higher potential of T cells to proliferate, persist, and lyse target cells. Finally, the ability to generate large numbers of tumor-specific T cells in a moderately short period of time makes this technology more attractive in a clinical setting.

In order to produce CAR modified T cells, CD4+ and CD8+ T lymphocytes are separated from the patient’s blood by leukocyte separation. The isolated T cells are then transfected with a viral vector (such as a lentivirus) that contains the CAR gene for the tumor target antigen.

In order to reduce the level of white blood cells, the patient received lymphatic depletion conditioning chemotherapy. Subsequently, autologous CAR T cells are injected, and the patient monitors the treatment response and the function of the modified T cells.

Antigen targeting through CAR is the key point of CAR design. Usually, CAR’s target recognition includes the use of scFv assembled from monoclonal antibodies. CAR modification of T cells can only recognize antigens expressed on the surface of target cells. In addition, scFv targeting tumors is similar to antigen-antibody interactions. Various factors, including the affinity of the binding domain, the structure of the epitope, and the amount of antigen expressed on tumor cells, will affect the response of the modified T cell to the target antigen.

Several studies have solved various anchoring ligands of extracellular domains. These ligands include scFv targeting certain molecules on the surface of tumor cells, or some reagents (such as avidin) designed at the N-terminus of CAR. Soluble biotin target conjugated to monoclonal antibody.

One disadvantage of the CAR strategy using scFv derived from murine antibodies is the emergence of antibody and cell-mediated reactions against these foreign molecules. To avoid this adverse effect, we can use humanized scFv domains or human antibodies to produce CAR (Hombach et al., 2000, Lamers et al., 1995) (Table I). 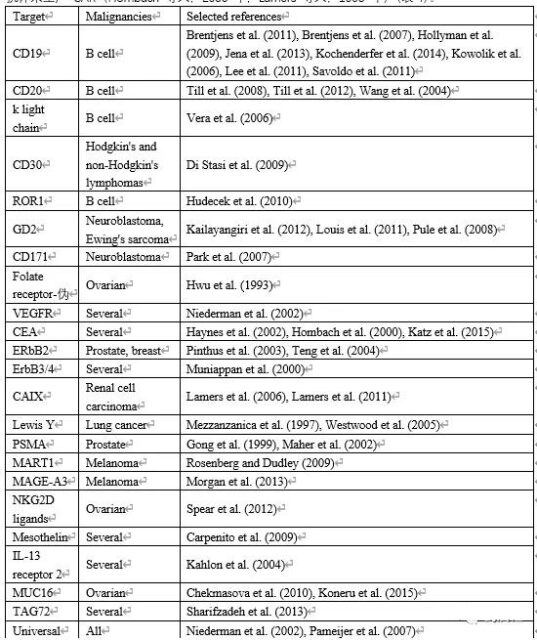 The second-generation CAR T cells consist of scFv linked to costimulatory domains such as CD28 and CD3ζ, which are used to improve CAR activation signals and increase proliferation and cytokine secretion (Figure 1). The interaction between CD28 and B7 family molecules (such as B7.1 and B7.2 on the surface of the target cell) provides a second activation signal that enhances the “signal 1” from the TCR-CD3 complex. In the second-generation CAR, signal 1 and signal 2 are transmitted through CAR molecules, leading to T cell proliferation, target cell lysis, IL-2 secretion and the expression of some proteins, such as the anti-apoptotic protein Bcl-xL. Studies have shown that the second-generation CAR T cells targeting PSMA are much more effective than the first-generation in IL-2 production and proliferation. 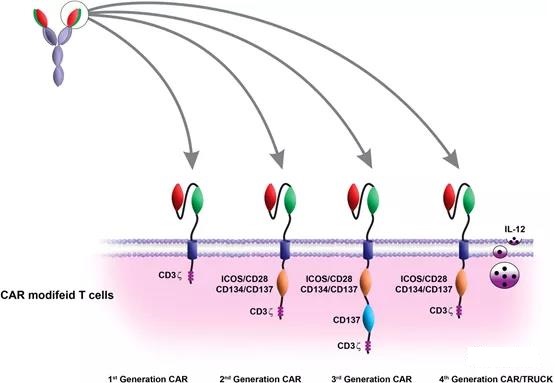 The interaction between the fourth-generation CAR and its target causes CAR T cells in the target tissue to activate T cells and secrete IL-12. The accumulation of IL-12 is an important strategy to attract innate immune cells (mainly NK cells and macrophages) in local tumor lesions. IL-12 is a heterodimeric protein that is physiologically secreted by macrophages and dendritic cells in response to intracellular pathogens (Trinchieri et al., 2003). The fourth-generation CAR secretes IL-12, causing NK cells and macrophages to infiltrate the tumor site, thereby improving tumor eradication. Optimal tumor eradication using CAR requires the binding of different signaling domains, which leads to the complete activation of T cells to promote the secretion of certain cytokines.

In order to achieve effective tumor eradication, transgenic T cells should be transferred to the tumor site where CAR T cells can target tumor cells. In fact, the main reason for the reduced efficiency of adoptive immunotherapy based on CAR engineered T cells is the poor ability of T cells to homing to tumor sites (Parente-Pereira et al., 2011). The migration of transgenic T cells to tumor sites has been demonstrated by dual bioluminescence imaging of CAR T cells in murine tumor models. The accumulation of CAR T cells in most tumor sites and the persistence of CAR T cells are the main principles for effective tumor eradication.
Studies have shown that genetically modified T cells expressing second-generation CAR will accumulate at the disease site. Brentjens et al. have demonstrated the trafficking of CAR T cells to multiple sites, including the liver, lymph nodes, and bone marrow. Pass the second-generation CAR for CD19. In another investigation, Savoldo et al. reported that patients with non-Hodgkin’s lymphoma (NHL) had homing of genetically modified T cells to skin lesions after adoptive cell therapy.

The low survival rate of infused T cells limits the efficiency of adoptive T cell immunotherapy. Transgenic T cells need to survive long enough to completely successfully eliminate the tumor. Robbins and others have shown that the efficacy of the anti-cancer response is related to the persistence of the injected T cells.

As shown in preclinical models, regulatory chemotherapy and low-dose irradiation can improve the survival rate of adoptively transferred T cells through a variety of mechanisms. Brent Jance et al. reported their observations on 10 patients with chronic lymphocytic leukemia (CLL) or acute lymphocytic leukemia (ALL). In the first group, patients received a second-generation CAR treatment containing CD28 and anti-CD19, without pretreatment chemotherapy, and showed undetectable persistence. Controversially, observations of the next group of patients who received pretreatment chemotherapy for lymphocytic depletion (cyclophosphamide) showed that transgenic T cells can last for 6 weeks after adoptive transfer in the bone marrow.

Another way to enhance the persistence of T cells in vivo involves the use of virus-specific T cells that have been genetically modified to express CAR. Murphy and others have demonstrated that CAR-specific influenza virus T cells have increased persistence in breast cancer mice. In another experiment, CAR-specific Epstein Barr virus (EBV) T cells were observed to improve the persistence of GD2 in patients with neuroblastoma. In patients receiving EBV-specific T cell therapy, continuous increase of CAR T cells in the circulation was also observed for up to 6 weeks. The T cells were modified by CAR and the T cells can recognize disialylganglioside GD2. Represents the antigen expressed by neuroblastoma cells.

In summary, modulation of chemotherapy, cytokine supplementation, patient’s tumor burden, T cell phenotype, costimulatory signaling, and possibly the use of virus-specific T cells are several factors that can improve the persistence of infused T cells.

The maintenance of cytolytic function is an important factor for the successful eradication of tumors by CAR transgenic T cells after adoptive transfer. In addition, several mechanisms may inhibit the function of adoptively transferred CAR T cells. These mechanisms include suppressor cells, such as Tregs, myeloid-derived suppressor cells (MDSC), and immunosuppressive molecules/cytokines (such as TGF-β).

Moreover, some of the genetic modifications mentioned above can also help genetically modified T cells resist immunosuppressive factors in the tumor microenvironment. For example, incorporating costimulatory molecules such as CD28 into CAR can help T cells become more resistant to Treg cells and TGFβ. Overexpression of AKT can also increase CAR resistance. A promising way to inhibit the action of TGFβ is to express the TGFβ receptor in the form of a decoy, which can be achieved through genetic strategies in CAR T cell design. The activation of T cells can be inhibited by programmed cell death protein 1 (PD1) expressed on the surface of T cells. The interaction between PD1 and its ligand expressed on the surface of cancer cells can inhibit the activation of CAR-T cells in the tumor microenvironment. Blocking PD1 with small interfering RNA (siRNA) or mAb is a promising method to reduce this form of immunosuppression.

The expression of IL-12 by genetically modified CAR T cells is another strategy to enhance drug resistance and may also change the tumor microenvironment. Genetic engineering of T cells expressing IL12 can also enhance anti-tumor function and will improve the ability to resist immunosuppression imposed by Treg cells. The secretion of IL-12 by T cells leads to the formation of immune supportive bone marrow cells in the tumor. It was found that transgenic T cells expressing chimeric NKG2D can improve cytokine secretion, leading to the transformation of bone marrow cells from an immunosuppressive phenotype to an immunostimulating phenotype. Li et al. have demonstrated that pretreatment chemotherapy can also reduce the number of Tregs and improve the anti-tumor function of T cells. Other immunosuppressive factors such as galectin and amino acid metabolites may also inhibit CAR T cell function, and future methods aimed at blocking these factors may produce more effective tumor-specific T cells.

Unwanted toxicity is a major problem and can limit CAR T cell-based immunotherapy. Transgenic T cells must recognize antigens that are only expressed on the surface of the tumor. Morgan et al. used the third-generation CAR for ERBB2 to treat patients with colon cancer. Patients who received lymphoblastic chemotherapy died 5 days after the CAR T cell infusion. The interaction between the transgenic CAR T cells and ERBB2 results in the release of pro-inflammatory cytokines. Therefore, pulmonary toxicity, multiple organ failure, and death of patients were observed after T cell infusion.

In another clinical trial, 2 of 8 patients who received transgenic T cell therapy to express MAGE-A3-specific CARs reported neurotoxicity. The conclusion is that neurotoxicity is the result of cross-reaction between MAGE-12 expressed on certain neurons and MAGE-A3 expressed only on tumors. These studies indicate the need for tumor-targeting antigens that are only expressed on cancer cells. Some important characteristics of the fourth-generation CAR T cells have been summarized in Table II. 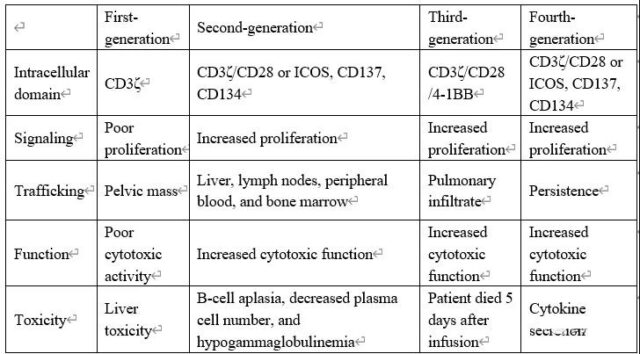 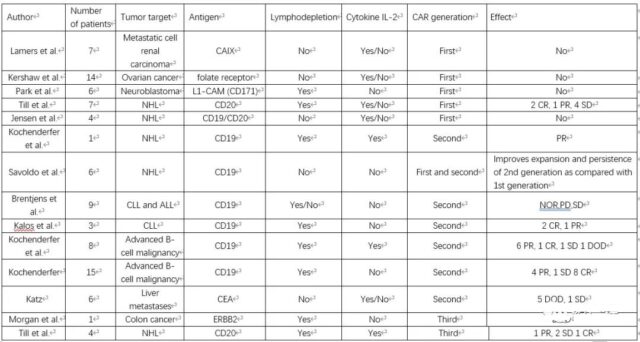 CD4+ and CD8+ T lymphocytes play an important role in cancer treatment. CD8+ CTLs can effectively eradicate tumor cells, while CD4+ T lymphocytes can enhance the secretion of certain cytokines to improve the ability of antigen presenting cells (APC) and the anti-tumor function of CTLs. CAR-based immunotherapy was developed for the cellular and humoral weapons of the immune system to effectively eradicate tumors.

Although some promising results have been obtained from clinical studies, some side effects that may limit the efficacy of CAR T cells have also been reported. In addition, harmful toxicity is a major problem observed in several clinical studies.

Secondly, the third and fourth generation CAR transplanted T cells have also been developed to overcome this obstacle. These generations of CARs show increased proliferation rate and increased cytokine secretion, and are more durable in the immunosuppressive mechanism of the tumor microenvironment.

It is expected that in the near future, many efforts will be particularly focused on the development of third- and fourth-generation CARs to achieve more successful results in cancer treatment.