NEJM: Is it ethical to select smarter and healthier children by genetic scoring, or even customize babies? is it safe?

NEJM: Ethical to select smarter and healthier children by genetic scoring?  In 1978, the world’s first human in vitro fertilization (IVF) baby was born. Because the fertilization process is carried out in the laboratory, these children are vividly called “test tube babies”. The “test-tube baby” technology has helped many people realize their dreams of becoming parents. In the past forty years, it is estimated that there have been about 7 million children born through test-tube babies and their improved technologies.

However, in recent years, with the advancement of technology, a service called “Embryo Selection Based on Polygenic Score (ESPC)” has begun to appear. This technology can allow in vitro fertilization recipients to choose healthier and more healthier options through polygenic scores. Clever embryo. However, what are the benefits, risks, and ethical issues of this service?

The report described the limitations of “Embryo Selection Based on Polygenic Score (ESPC)” and warned patients and doctors undergoing in vitro fertilization not to form the impression that ESPC technology is effective and low-risk.

The same gene usually affects different traits. Therefore, using ESPC technology to select a trait may result in another unfavorable trait. For example, if a gene is selected to make the child smarter, this gene may lead to the future The child has mental problems.

The author of the article also warned that the extensive use of ESPS technology may also change the demographic structure, exacerbate socioeconomic inequality, and devalue certain characteristics. Therefore, it is necessary to formulate standards for this service and conduct corresponding supervision to prevent the abuse of this technology.

The polygenic score is a prediction of individual health and other results from genome-wide association studies. In fact, in adults, polygenic scores can partially predict these results, but the predictive ability is also weak, especially for the prediction of social and behavioral characteristics. More importantly, the technology’s ability to predict embryos is significantly reduced.

However, even so, many companies have already cooperated with medical institutions that perform IVF assisted reproduction to select embryos for those patients undergoing IVF, hoping to select out adults who suffer from diabetes, cancer, heart disease, inflammatory bowel disease, and Alzheimer’s disease. Embryos with lower probability of diseases such as Zheimer’s disease and schizophrenia.

“Embryo Selection Based on Polygenic Score (ESPC)” requires at least a selected feature to give a moderately accurate prediction in order to be useful.

However, when generating polygenic scores through genome-wide association analysis, people with high scores and people with low scores do have moderate or even large differences. However, these differences are based on people from different families and variables are not excluded. When the same family members are scored with multiple genes, the predictive ability is greatly reduced.

For example, in the prediction of future education levels, members of different European families with different scores do have large differences, but the differences in predictions between members of the same family are greatly reduced. 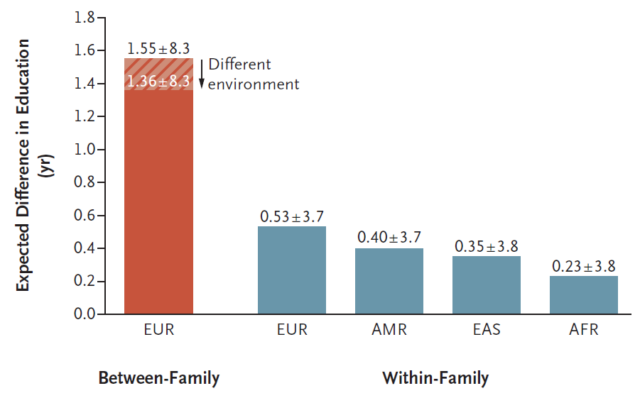 In addition, most of the polygenic scoring standards established through genome-wide association analysis are based on European populations, and are not applicable to populations in other regions.

For example, predicting the risk of hypertension, type 2 diabetes, and coronary artery disease through polygenic scores can clearly see that it is the most significant in the European population, and decreases in the United States, East Asia, and Africa. 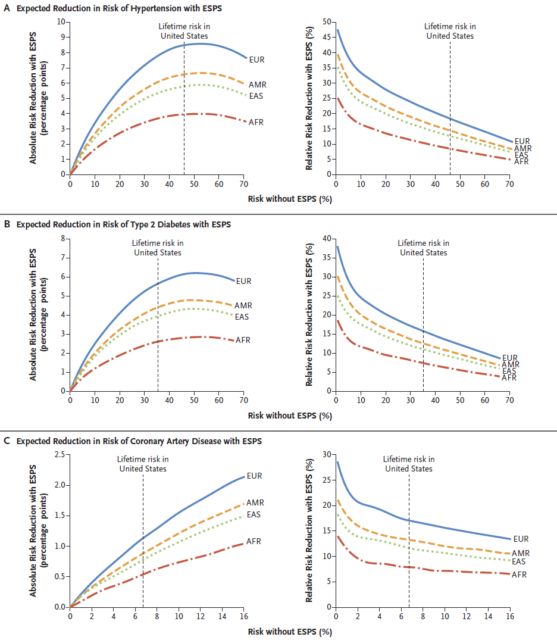 A trait selected by the polygenic score may lead to another unfavorable trait. For example, if a gene is selected to make the child smarter, this gene may cause the child to have mental problems in the future.

Another point is that the environment of embryos selected through polygenic scores may change during and after adulthood, which will also reduce the accuracy of the original prediction.

Finally, even if the polygenic score achieves limited accuracy, its widespread use will also bring other risks. At present, the technology is largely only suitable for wealthy people, and the most accurate prediction is Europeans, which will aggravate society. It’s not fair.

Moreover, the feature abandoned by the technology will be regarded as a low-value feature, which will lead to prejudice and discrimination. For example, if many people do not choose single eyelids, then those with single eyelids may be discriminated against.

The corresponding author of the article, Professor Daniel J. Benjamin of the University of California, Los Angeles, said that many individual reproductive decisions, accumulated over several generations, may have far-reaching social consequences. These decisions may change the demographic structure, exacerbate social injustice, bring discrimination, and so on.

Therefore, the author of the paper calls on professional medical associations to formulate policies and guidance documents for “Embryonic Selection Based on Polygenic Score (ESPC)”, and also calls on companies that provide these services to prove the completeness and accuracy of the information they provide to customers. And easy to understand.