What are the long-term sequelaes of people infected with COVID-19?

Jennifer Mijas used to lead an active lifestyle, playing tennis, and walking around Seattle. But in March 2020, she tested positive for COVID-19 and she has been sick ever since. Up to now, walking a few hundred yards has made her feel exhausted. In addition, she also showed shortness of breath, migraine, arrhythmia and other debilitating symptoms.

The above situation is not exceptional. According to data from the US Centers for Disease Control and Prevention, 10% to 30% of SARS-CoV-2 infected people experience long-term health problems. Many of them are like Mijas. These persistent symptoms are called acute sequelae of SARS-CoV-2 infection (PASC), or more commonly the long-term sequelae of COVID-19, which may be mild or severe. Loss of function affects almost any organ system in the body. 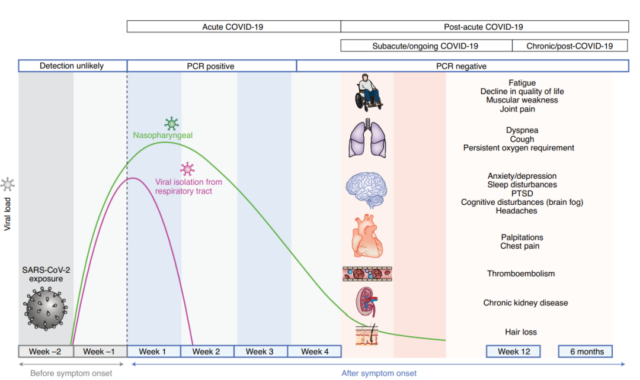 Affected people often report extreme fatigue and physical pain. Many people lose their sense of taste or smell, their brains are dull, and they cannot concentrate. This is a common problem. Experts worry that some patients with long-term sequelae of COVID-19 may never recover.

Controversy over the long-term sequelae of COVID-19

The long-term sequelae of COVID-19 has also caused some controversy. Some people believe that it stems to a certain extent from the psychological shock of being infected with COVID-19, coupled with the lockdown, social isolation and fear associated with the pandemic, is a problem worthy of discussion. A recent article published in “Natural Medicine” showed that in many cases, individuals who had never been tested for SARS-CoV-2 or tested negative also developed persistent symptoms, which aroused people’s suspicion. Another study in May 2020 reported a survey of 640 patients with symptoms and found that only a quarter of them tested positive.

Nevertheless, at present, epidemiological evidence on the existence of the long-term sequelae of COVID-19 is accumulating in the literature, and this disease itself is increasingly regarded as a real disease. A recent study found that after 488 COVID-19 patients in Michigan were discharged from the hospital, one-third of the patients still had shortness of breath and other symptoms, and many patients were still getting worse after two months. A recent meta-analysis of 45 studies involving nearly 10,000 COVID-19 patients found that 73% of them had at least one persistent symptom within 60 days of diagnosis or 30 days after recovery.

Possible causes of the long-term sequelae of COVID-19

Now, as scientists study various mechanisms in depth, hypotheses that may explain this long-term sequelae are emerging. Many scientists believe that this condition is a post-viral syndrome, no different from other infectious diseases. Survivors of SARS in 2003 also have lung, heart, and nervous system problems, which may last for months or years after they become ill. Similarly, for influenza, the history of the Spanish influenza pandemic of 1918 is full of lingering muscle atrophy, tremors, depression, and “neural complications.” Viral triggers are also related to the onset of myalgic encephalomyelitis/chronic fatigue syndrome (ME-CFS), which produces symptoms similar to the long-term sequelae of COVID-19, such as extreme fatigue and muscle pain.

More and more evidences show that patients with long-term sequelae of COVID-19 have autonomic neurological disorders in autonomously regulating heart rate, blood pressure, digestion and other involuntary processes. One potential consequence is a condition called orthostatic orthostatic tachycardia syndrome, which can cause the heart rate to soar above 100 beats per minute while standing. Mijas suffers from POT. She said her heart rate can soar to 140 beats per minute just because she gets up to make toast.

The cause of POTS is unclear, but the virus binds to the angiotensin-converting enzyme 2 (ACE-2) receptors on many different cell types, disrupting inflammation and blood clotting pathways. Systemic inflammation and coagulopathy can cause damage to blood vessels and further damage other organs.

Whether SARS-CoV-2 itself can enter the brain remains to be determined. However, studies have shown that the viral load in the brains of infected mice is high, and SARS-CoV-2 may spread along the olfactory nerve into the human brain. Immunologists speculate that among COVID-19 survivors, damaged blood vessels may cause toxic blood components to enter the brain, causing permanent or long-term symptoms. “

Evidence suggests that another symptom of the long-term sequelae of COVID-19 is persistent inflammation. A study showed that inflammatory markers such as IL-6, TNF, and C-reactive protein were elevated in the plasma of 24 patients 6 to 9 months after hospitalization, some of which had only mild symptoms at first. What causes the persistent inflammation is currently unclear. Some people suspect that the virus destroys the microbiota, which is closely related to the metabolism and immunity of the host. Another possibility is that the level of local cytokines caused by tissue damage is too high, which overflows into the systemic circulation and causes symptoms.

Other experts speculate that inflammation may also come from low-level infections in the tissues. For example, a recent study in the journal Nature found that SARS-CoV-2 antigen can still be detected in the intestinal biopsy of people who tested negative for the virus using nasal swab PCR for four months after infection.

Finally, scientists suspect that the symptoms of the long-term sequelae of COVID-19 may in some cases be caused by autoantibodies that attack the body’s own cells. A study found that within 7 months after infection, even patients with mild initial disease will produce a large amount of autoantibodies. In addition, antibodies are detected more frequently in people who still have symptoms during the recovery period than those who have no symptoms.

Treatment of long-term sequelae of COVID-19

At the same time, clinicians are trying their best to treat symptoms and try physical rehabilitation methods, as well as breathing exercises to stimulate the vagus nerve as a means to restore normal heart rate and nervous system function. The first task is still to determine the conditions of occurrence and investigate their underlying mechanisms.

The first consideration for clinicians is to reuse drugs that have been approved for other diseases.

Amgen’s Corlanor (ivabradine) has shown efficacy in the treatment of POTS for the long-term sequelae of COVID-19. It was previously used to treat heart failure caused by dilated cardiomyopathy in children 6 months and older. Ivabradine is a hyperpolarized activated cyclic nucleotide gated (HCN) channel blocker that reduces heart rate without lowering blood pressure. In a clinical study conducted on 22 patients with POTS, the results showed that the drug significantly improved the quality of life and lowered the heart rate while standing.

ImmunoTech’s Ampligen (rintatolimod) is currently being applied to patients with long-term sequelae of COVID-19. Ampligen is a selective Toll-like receptor 3 (TLR3) agonist with a 20-year history of development. It was first used in HIV and then ME-CFS. At present, the data of the ongoing Phase 3 clinical trial recently released by ImmunoTech shows that patients taking rintatolimod have increased the end-point exercise time of the trial on the treadmill by about 25%. The trial has now been expanded to include patients with chronic fatigue induced by COVID-19.

As of the end of June, more than 180 million people have been tested positive for SARS-CoV-2, and hundreds of millions of people may be infected with SARS-CoV-2. Some new drugs are under development to address possible medical problems. A large number of new indications.

CytoDyn is testing its CC motif chemokine receptor 5 (CCR5) antagonist leronlimab, a humanized IgG4 monoclonal antibody. This is a phase 2 trial with a target population of 50 people. CCR5 is involved in many disease processes, including HIV, multiple sclerosis, and metastatic cancer. Leronlimab has been tested in phase 2b/3 clinical trials as an add-on treatment for respiratory diseases in critically ill patients with COVID-19. The results show that the drug has survival benefits compared with commonly used treatments. The current phase 2 will study the drug as a treatment for a wide range of symptoms.

Ampio Pharmaceuticals’ cyclized peptide LMWF5A (aspartyl alanyl diketopiperazine) reported a positive phase 1 result. The drug can treat excessive lung inflammation. Ampio claims that this peptide improves the overall health of patients with respiratory distress. Due to mortality. In the new phase 1 trial, patients with respiratory symptoms lasting 4 weeks or more will self-administer a nebulizer at home for 5 days.

Synairgen in the United Kingdom used a similar approach to add the long-term sequelae of COVID-19 to the Phase 3 clinical trial of SNG001 (inhaled IFN-β). The results of the Phase 2 study of the drug showed that compared with placebo, SNG001 was beneficial to the improvement, recovery and discharge of the patient on the 28th day.

Mijas was lucky to treat her POTS with ivabradine, which is not covered by her insurance company and costs $500 a month. She said: “For me, this medicine is very effective. After taking it, my maximum heart rate when walking does not exceed 115 beats per minute. But when I don’t take the medicine, I get very excited and then feel bad. “Mijas said she is getting better and better now, she can talk to people better and is more focused than before. But she still suffers from a variety of diseases, including chest pain, joint pain, and swelling of hands and feet.

Immunologists are looking for treatments or drugs that can make patients feel better. Looking forward to clinical trials, there are many ongoing, but there is no conclusive evidence to show which ones may be effective and which ones may not be effective. This is a very new disease. People are learning how to evaluate patients in a comprehensive way, analyze symptoms and try to resolve them, but there are many things we don’t know yet.