Will people infected with COVID-19 relapse like survivors of Ebola virus?

Nature:  Ebola virus survivors relapsed a few years later. Does it indicate that there is a possibility of another outbreak of COVID-19 cases after the global reset?

Scientists already know that the Ebola virus may be lurking in survivors. These survivors test negative because the virus is present in the tissues rather than circulating in the blood.

Ebola survivors may recur after at least five years of infection and cause an epidemic again. Long-term follow-up of previous patients is required to prevent a catastrophic epidemic.

An article titled “Resurgence of Ebola virus in 2021 in Guinea suggests a new paradigm for outbreaks” published yesterday in “Nature” analyzed the outbreak in Guinea this year and found that the viruses in these “virus databases” may be awakened. , And triggered a new round of infection and spread after a few years. 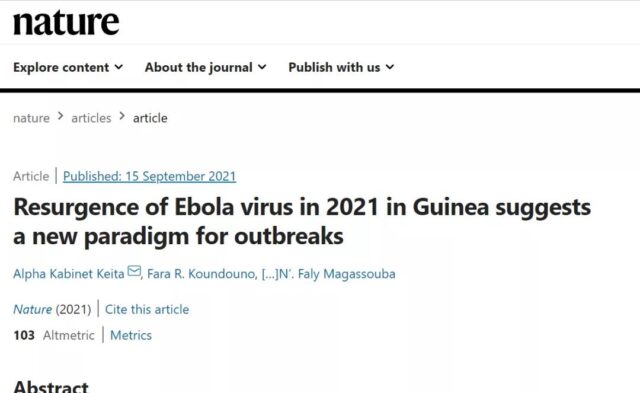 In order to trace the source of the outbreak in Guinea, the researchers analyzed the sample genomes of several patients, including 16 confirmed cases, of which 12 died.

Ebola virus outbreaks are generally considered to be the result of the virus “spreading” from animal hosts to humans. However, analysis showed that the Guinea strain was almost identical to the 2013-16 strain. If the virus has been actively circulating in the population since then, then as it spreads, a certain number of mutations will accumulate. However, the virus that broke out in Guinea in 2021 only had 12 genetic mutations, “far below expectations…after all, the virus spreads from person to person in six years.”

Alpha Keita, a researcher at the University of Montpellier who led the study, said this strongly suggests that the source of the virus is reactivated viruses that once lurked in survivors. He told AFP: “This is the longest known time between the announcement of the end of the epidemic and the resurgence of the virus. This is a new paradigm: the virus carried by the infected person during the last virus epidemic may be It is the source of a new epidemic.” How and why the latent Ebola virus suddenly awakened and infected people with the virus is still a mystery despite some attractive clues.

Sometimes, the Ebola antibodies in survivors will surge within a certain period of time-this may be the body’s response to the revived virus. Keita said that about two-thirds of Ebola survivors still have high antibody levels even after five years of infection, but “the question is, what happens if the virus in survivors with reduced immunity recurs.”

Robert F. Garry of Tulane University’s School of Medicine said the findings of this study “have important implications for public health and the care of Ebola survivors.” He wrote in a research review commissioned by “Nature” magazine: “Humans can now be included in the list of intermediate hosts. These hosts will serve as a long-term’viral reservoir’ for the Ebola virus and trigger a new round of epidemics. “He believes it is necessary to prioritize medical staff to be vaccinated and monitor Ebola survivors for signs of deterioration.

Keita hopes to reconsider the term “Ebola survivors” to include not only those struggling with symptoms, but also those who may have been infected but have no symptoms (ie, asymptomatic infections). He warned that even asymptomatic infections may be the source of the outbreak. “We need to develop a long-term and effective follow-up medical plan for former Ebola patients and their contacts so that we can detect the recurrence of the previously infected patients in time.”

However, he reminded that in order to avoid rejection of survivors, we must be cautious. Trudie Lang, director of the Oxford University’s Global Health Network, agrees. He said: “Some people think that these survivors are heroes. However, if people are worried that these people will bring risks, they may also be stigmatized and rejected.”

Lang was not involved in the study, he called this “important new evidence” and reminded people of the need to support research on threats other than COVID-19. Keita said this study paved the way for various other studies, including the reasons for the recovery of Ebola and the possibility of eradicating Ebola from survivors.

The re-emergence of Ebola virus in Guinea was caused by the awakening of the latent virus in Ebola survivors. Although it is unbelievable, it has been previously reported that people who have recovered from the new coronavirus may be infected again. After all, these two situations are the same.

So, after the global clearing of COVID-19 cases in the future, is there a possibility of another outbreak? Just like the Ebola virus, it lurks in the survivors and coexists with others. Once the immunity of the survivors is reduced, the virus will take the opportunity to recover and spread again. People who do not have the COVID-19 antibody in their bodies are easily infected.

Since there is currently no way to eradicate the virus, we should do as much protection as possible and try our best to protect ourselves from viruses. Fortunately, we are now ready to formulate long-term and effective follow-up medical programs for survivors and their contacts, so that the latent virus in the survivors can be detected and the re-spreading of the virus can be prevented to the greatest extent.