Men with GIGYF1 gene mutation 30% more risk of developing type 2 diabetes.   Mosaic Loss of Y chromosome (LOY) in leukocytes is the most common form of clonal mosaicism, caused by the imbalance of cell cycle and DNA damage response pathways. LOY is associated with the risk of many complex diseases and traits, however, the biological mechanisms supporting these observations are unclear.

Like other forms of clonal chimera, LOY is closely related to age, reflecting mitotic errors in hematopoietic stem cell division and subsequent clonal expansion. So far, genetic research on LOY has mainly focused on common genetic variants inferred by genotype arrays, which largely ignores the contribution of rare and often more harmful alleles. Therefore, identifying new genetic determinants related to LOY may not only promote people’s understanding of clonal hematopoiesis, but also identify sites susceptible to other complex traits through a common biological mechanism.

Recently, the team of Professor John Perry from the University of Cambridge published a research paper titled: GIGYF1 loss of function is associated with clonal mosaicism and adverse metabolic health in the journal Nature Communications.

There are currently two methods to quantify LOY: one is through the average log2-transform R ratio of signal intensity (mLRR-Y), and the other is through the use of dichotomous measurement (PAR-LOY) in the pseudo-autosomal region (PAR) of sex chromosomes. ). These two methods have their own strengths, so the research team merged them to improve the signal-to-noise ratio, thereby enhancing the statistical ability to detect genetic associations. They called this joint quantitative measurement method PAR-LOYq.

To identify genes related to LOY, they used exome sequence data to analyze the gene load of PAR-LOYq of 82277 male UK Buibank participants. By folding together rare loss-of-function or moderately affected variants in each individual gene, an association test was performed on the two models. They found that the stress test association between CHEK2 and GIGYF1 was statistically significant, and CHEK2 was significant. 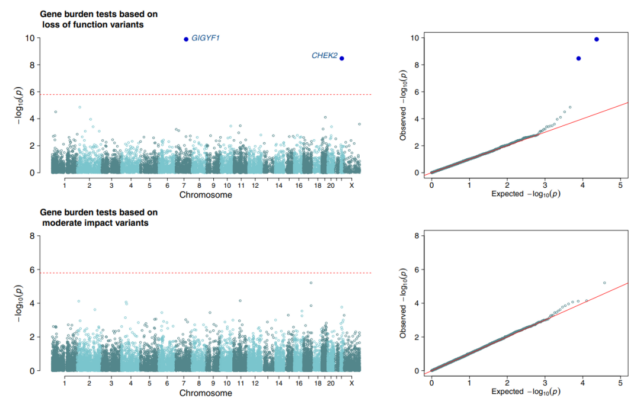 The risk of the PAR-LOY dichotomy increased by 6 times and mLRRy was reduced by 0.038. Second, in the sensitivity analysis, when multiple allelic loci are excluded or the INDEL is limited to the high-confidence loss of functional variants defined by LOFTEE, the PAR-LOYq association results are highly consistent.

They used the second analysis pipeline implemented in STAAR to reproduce the same correlation signal, indicating that the loss of GIGYF1 function is not related to any genetically derived main components, and the carriers are geographically dispersed across the UK.

In general, this method of exome sequencing found a rare functional allele deletion in the GIGYF1 gene. This rare mutation will greatly increase the susceptibility to Y chromosome loss (LOY) and the risk of type 2 diabetes. risk. The potential direct link between clonal chimerism and metabolic health is emphasized.

This discovery highlights the exciting scientific potential of genome sequencing of large populations, can help people better understand common diseases, such as type 2 diabetes, and provides new ways to prevent and treat these diseases.