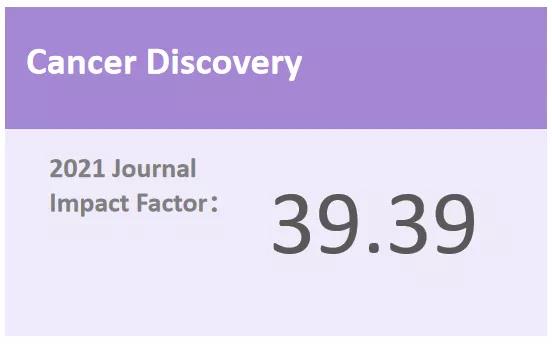 Immune cells in the tumor microenvironment are highly heterogeneous and dysfunctional due to tumor induction, which is crucial for the immune escape of tumors and the failure of anti-tumor immunotherapy. Therefore, understanding the cellular basis and molecular mechanism is of great significance for guiding the treatment of tumors.

This study found a CD8+ tumor infiltrating subpopulation with high proliferation, overactivation and dysregulation of apoptosis. This subpopulation is amplified in tumor tissues in a PD-dependent manner, and its abundance is related to the drug resistance of cancer immunotherapy. Therefore, it becomes a potential biomarker and can provide new insights for the development of tumor immunotherapy in the future.

In the process of tumorigenesis, development and invasion, a variety of cellular and molecular mechanisms will appear to evade and/or resist the attack of the immune system. These mechanisms are collectively referred to as adaptive immune resistance. These mechanisms usually lead to rejection or dysfunction of Tumor-Infiltrating Lymphocytes (TIL), thereby limiting the endogenous anti-tumor immune response.

Currently, strategies such as anti-PD therapy seek to correct and restore the response of damaged T cells to cancer. This approach is called cancer immunonormalization therapy. However, basic questions such as the specific mechanism of CD8+ T cell dysfunction or how anti-PD therapy can overcome this dysfunction remain unanswered.

In the tumor microenvironment (Tumor Microenvironment, TME), the differentiation of CD8+ T cells may be altered, making their heterogeneity more complicated. At the same time, the complex and unique ecosystem of human TME is composed of tumor genetic diversity, spatial heterogeneity, and asymmetric changes in anti-tumor therapy, which are more likely to contribute to the diversity of CD8+ TIL and may determine the differentiation of CD8+ TIL. Unique approach. Therefore, a detailed understanding of dysfunctional CD8+ TILs can improve the anti-tumor response of patients’ T cells.

On March 3, 2021, the Yale University research team published an article titled A Burned-Out CD8+ T-cell Subset Expands in the Tumor Microenvironment and Curbs Cancer Immunotherapy in Cancer Discovery, which uses multi-layer orthogonal and complementary analysis Platform, including single-cell mass spectrometry flow detection technology (CyTOF), quantitative immunofluorescence (QIF) and transcriptome sequencing (RNA-seq), etc., systematically studied the nature and characteristics of dysfunctional human T cells, and revealed that TME A group of dysfunctional CD8+ TIL subtypes, which have signs of terminal differentiation, and expand in a PD pathway-dependent manner in TME, with high apoptosis and high proliferation characteristics.

In addition, this group of abnormal CD8+ TIL subgroups accumulate in patients with advanced non-small cell lung cancer (NSCLC), and the higher its abundance, the worse the clinical response of anti-PD therapy.

First, tumor (Tu) and non-tumor (non-Tu) paired lung tissues from 25 patients with resectable NSCLC were used for the study. Multi-parameter CyTOF and QIF analysis based on proteomics was used to study its immune cell population. The main immune cell populations were determined based on the differential expression of specific lineage markers, and it was found that each lymphocyte subpopulation in Tu tissue increased significantly. 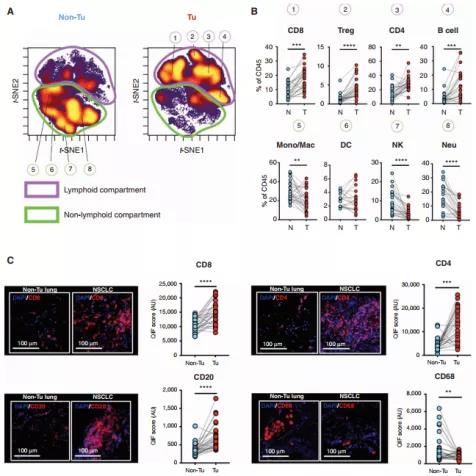 In contrast, the total ratio of lymphocytes to non-lymphocytes in Tu tissue is significantly higher. In addition, the proliferation capacity of CD8+ TILs (Ki-67+) is significantly higher than that of non-Tu CD8+ T cells. The proliferation levels of other lymphocyte populations, including conventional CD4+ T cells, regulatory T cells (Treg), and B cells did not change significantly. These data indicate that CD8+ TIL specifically expands in the TME of NSCLC patients.

Analysis of the characteristics of special CD8+ TIL subgroups

In order to further understand why the significantly increased number of CD8+ TILs cannot control tumor growth in NSCLC patients, the researchers conducted a more comprehensive phenotypic and functional analysis of lymphocytes in TILs and paired non-Tu lung tissues, and based on phenotypic markers The expression profile classifies T cells in Tu and non-Tu lung tissues.

It was found that CD8+ T cells were divided into two categories: effector T cells (Eff; CCR7−CD45RA+CD45RO−) and memory T cells (EM; CCR7−CD45RA−CD45RO+) cells. Further analysis showed that effect memory T cells can be further subdivided into two additional subgroups, one of which shows the traditional effect memory phenotype, referred to here as effect memory (Em) cells; the other subgroup is expressed as High expression of CD45RO, EOMES, FAS, CD27, CD28, KLRG1, PD-1, LAG3 and TIM3. This is consistent with the activation, terminal differentiation and pro-apoptotic phenotype, and is called Burned-out effector (Ebo). 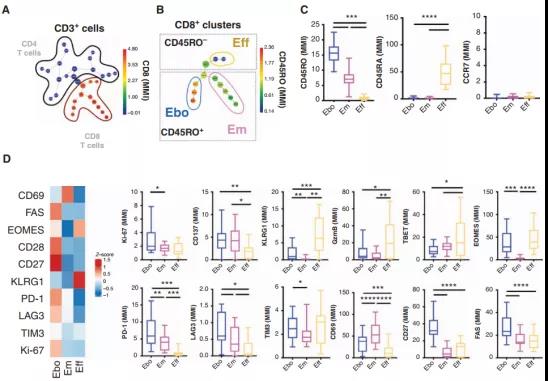 Given that Ebo is the only selectively amplified subpopulation in TME, they further explored the transcriptional and functional characteristics of these cells to understand their uniqueness. Three CD8+ TIL subpopulations were sorted by flow cytometry and analyzed by whole transcriptome sequencing.

Correspondingly, the gene set enrichment analysis (GSEA) results also showed that the Ebo population was enriched with proliferation signals, while the Em population was enriched with stem cell-type signals. Taken together, these data indicate that the three CD8+ TIL subgroups are transcriptionally different, and indicate that the Ebo subgroup is enriched in apoptotic and dysfunctional CD8+ T cells. 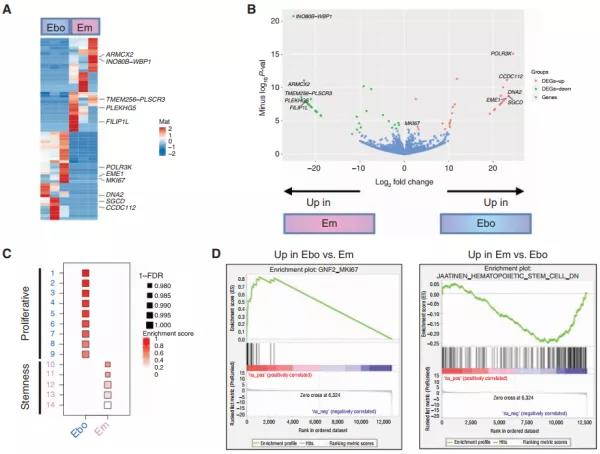 Next, in order to test the impact of anti-PD therapy on the CD8+ TIL population, the researchers used avelumab (anti-human B7-H1 monoclonal antibody) or isotype control to treat human tumor xenograft models (PDX) implanted with B7-H1+ tumors. As shown in the figure below, avelumab treatment significantly reduced the expansion of Ebo and effectively prevented the reduction of Eff. In addition, avelumab also reduced the expression of pro-apoptotic markers (BIM) in Eff cells and increased the levels of activation markers CD27 and CD69.

These results indicate that B7-H1/PD-1 blockade may protect the population during activation. In Eff and Em, TBET increased significantly after B7-H1 blockade, which was consistent with the increase in in vivo and in vitro IFNγ production observed after re-stimulation. These data indicate that, over time, the Ebo CD8+ TIL subgroup continues to expand in TME, and this expansion can be reduced by B7-H1 blockade. 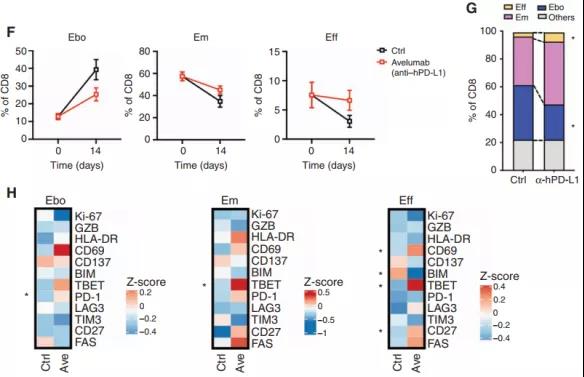 Since Ebo has been observed to gradually expand in human TME over time, the researchers speculate that the expansion of this dysfunctional CD8+ T cell population may be related to the progression of the disease, and may assist tumor immune escape and/or immunotherapy Resistance. In order to verify this hypothesis, they analyzed the data of 35 patients with early and advanced NSCLC and found that the abundance of Ebo CD8+ TILs in clinical stage IV NSCLC patients was significantly higher than that in clinical stage I patients. With continuous progress and evolution, the cell population will continue to expand.

In addition, compared with patients with continuous clinical benefit (DCB), patients with non-sustained clinical benefit (NDB) have a greater proportion of Ebo CD8+ TIL. Consistent with this finding, the expression of PD-1, LAG3, and Ki-67 in CD8+ TIL in NDB patients is also higher, and these markers are associated with the Ebo CD8+ TIL phenotype. Finally, the abundance of Ebo CD8+ TIL subpopulations is associated with poor overall survival. In summary, these results support the view that Ebo is expanded in the TME of patients with advanced NSCLC, and its expansion is independently related to the decrease in the efficacy of anti-PD therapy. 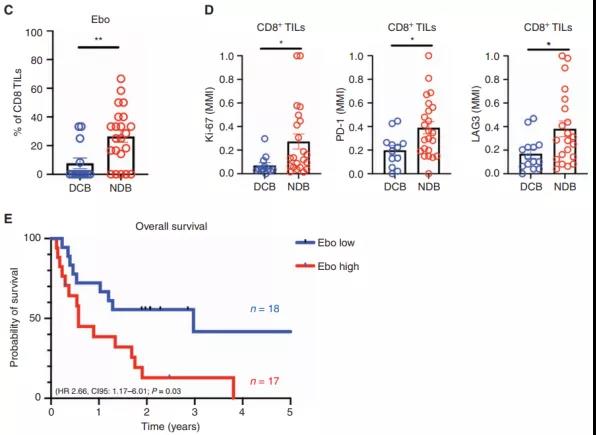 This study used multiple platforms, tools, and models to explore the diversity of CD8+ TIL and its response to immunotherapy, and finally identified three CD8+ TIL subgroups with different phenotypes, transcriptions, and functions: Eff, Em, and Ebo, among which the Ebo subgroup is characterized by a dysfunctional exhaustion phenotype, and is specifically expanded in a PD pathway-dependent manner in TME.

In addition, Ebo progressively accumulates in patients with advanced NSCLC and is related to the main resistance of anti-PD therapy. This work contributes to a deeper understanding of the diversity of T cells in the tumor microenvironment, and Ebo may serve as a potential biomarker, which is of great significance for the development of future T cell-based cancer immunotherapy strategies.