Japan and Canada may follow up third dose of COVID-19 vaccine soon.  Tests have shown that Pfizer and Moderna’s messenger ribonucleic acid (mRNA) vaccines are more effective than cheaper vaccines developed by AstraZeneca/Oxford and Johnson & Johnson.

Therefore, more countries are urgently locking the third dose (booster shot). Pfizer said: Except for the revised contract announced by the European Commission, other content is still confidential, so we do not comment.

Israel is already administering the third injection of Pfizer to citizens over 60, and became the first country to provide the 3rd dose (booster shot) in the world

According to a draft document obtained by AFP on Sunday, due to concerns about the spread of the Delta virus, Germany plans to start additional injections for the elderly and high-risk groups on September 1.

UK, which is not part of the European Union, has a similar plan. London’s “Daily Telegraph” reported that the United Kingdom will begin to provide 32 million Britons with additional doses of vaccine from the beginning of September, and 2,000 pharmacies are expected to assist in the delivery of the third dose.

This plan may be on the road as soon as September 6 and be completed in early December.

The report also said that all people over 50 years of age and immunosuppressed will receive supplemental doses.

The Japanese government is concerned about the spread of the Delta virus and the reduction of immunity brought by the vaccine over time. The Ministry of Health, Labour and Welfare is also discussing a third dose of vaccine for the public next year.

The Canadian government has ensured a COVID vaccine for the next few years, and provides enough vaccines for all eligible Canadians, and administers booster shots when necessary. 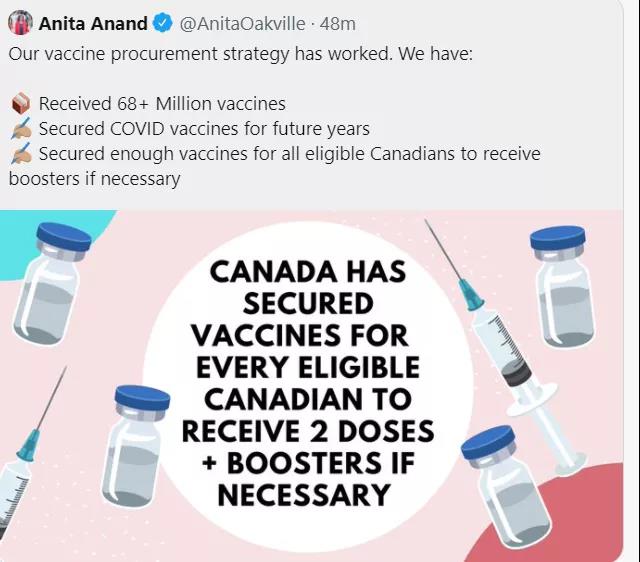 The Canadian government has decided to provide a three-dose booster vaccine to special people in September in order to protect vulnerable groups.

These include long-term caregivers, the elderly, and people with weakened immune systems. Experts from the Ministry of Health said that they hope to finish the three shots of the vaccine before the winter arrives, so as to avoid the emergence of new mutant viruses!