Nature Sub-Journal: Demystifying the story behind the production of COVID-19 vaccine

Demystifying the story behind the production of COVID-19 vaccine. A book and a documentary by the Oxford-AstraZeneca team went behind the scenes in the world vaccination competition. Especially during the pandemic, researchers tried to use them, hoping to increase people’s trust in vaccines and fight the virus together!

Last August, when biologist Catherine Green and his daughter were camping in Wales, an accidental conversation beside the pizza cart turned to a familiar topic: COVID-19. A camping companion told her: “We don’t know what they put in the vaccine. I don’t believe them. They didn’t tell us the truth.”

Green is the only one who knows this. She runs a clinical biopharmaceutical factory at Oxford University in the United Kingdom and is also a member of the team developing a COVID-19 vaccine, which was in clinical trials at the time.

AstraZeneca Pharmaceuticals of Cambridge, UK, plans to produce 3 billion doses of this vaccine by the end of 2021 and distribute them around the world, thereby significantly protecting people from serious diseases and death threats.

However, nearly a year after the incident in Green, conspiracy theories continue to hinder the use of the COVID-19 vaccine, whether in areas with sufficient doses or in areas with sparse doses, it is life-threatening.

In April, the Caesars Family Foundation, a non-profit organization based in San Francisco, California, found that 54% of American adults believed common misinformation about the COVID-19 vaccine, or believed it was true.

Taking into account the prevalence of misinformation, Green and Oxford University vaccinologist Sarah Gilbert decided to write “Vaxxers”. This is a behind-the-scenes story, trying to humanize vaccine production, hoping to increase trust. This book, along with the “Vaccine” documentary commissioned by the BBC and CNN Films, is a “race” to develop a COVID-19 vaccine during a raging pandemic. Recently, a researcher published a paper entitled “The COVID vaccine makers tell all” on Nature. 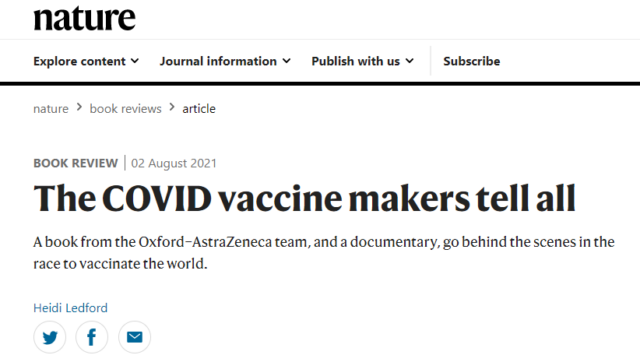 This book and documentary are a very useful combination. The film tells the story of five research teams giving up sleep and family time to develop vaccines using methods ranging from time-tested truly inactivated viruses to cutting-edge messenger RNA technology. This book is an in-depth excavation by a team because it takes into account financial pressure, media interviews and family responsibilities. All research teams are balancing the need for caution and order with the pressure to develop and test vaccines faster than ever before. They carry the hope of the whole world-they also know this.

The footage of this film reveals the cost of endless pressure. At the University of Queensland in Brisbane, Australia, virologist Keith Chappell’s eyes gradually turned red, and his clothes became more scattered. Last December, when he learned that he had to give up his protein vaccine, the muscle atrophy on his shoulder was heartbreaking. Wu Guizhen, a biosafety expert at the Chinese Center for Disease Control and Prevention in Beijing, described her coping mechanism: “When you feel too tired to move on, my solution is to stand and sleep for a while.”

This documentary also occasionally inserted a prominent narrative at the time: between the two groups, the first vaccine development competition. Media reports sometimes describe this incident as a profit-seeking behavior, but Green and Gilbert have repeatedly emphasized that the real competitors are always opposed to the virus and its rising death toll, not other groups.

The Oxford-AstraZeneca story began around 2014. Gilbert moved between grants and contracts at Oxford University to raise laboratory funds. They first look for ways to develop an Ebola vaccine, and then prepare for the future epidemic “Disease X”. The identity of this disease is uncertain, but its eventual arrival is beyond doubt.

Soon after the news of SARS-CoV-2 came in in early January 2020, Gilbert and Green decided that COVID-19 might be disease x. They risked their reputation and the large amount of funds from Oxford University to prepare the vaccine, even before the need became clear. Although I have reported on many aspects of COVID-19 vaccine development in the past year, I was surprised to learn that they had to “gamble” in the early stages. I don’t know if the funds will be available and the first clinical trial. The vaccine bottles used in are hand-canned at Oxford University.

Starting in April this year, they will cooperate with AstraZeneca to increase its production capacity. But there are also some cultural conflicts between small, flexible academic laboratories and huge enterprises. This cooperation, as well as the cooperation with the Indian Serum Institute in Pune, and the early insistence on minimizing prices and providing vaccines to the world, helped to ensure that Gilbert and Green’s early gambling had a global impact.

Here are some details about the more frustrating moments in the development of the Oxford-AstraZeneca vaccine. This includes explaining why some clinical trial participants receive different doses of the vaccine and wait different lengths of time between injections. Both events have complicated the interpretation of the research results. Other critical moments receive little attention. The book did not mention that South Africa decided not to use the Oxford-AstraZeneca vaccine in February because the vaccine failed to prevent infection of the Delta variant in the region. Regarding the safety of an extremely rare but potentially fatal blood coagulation disorder that may be related to the vaccine, only a brief introduction will be made.

Nevertheless, this book emphasizes the lack of research behind vaccines and the need to promote vaccines. The author has repeatedly emphasized that speeding up development is not by skipping security steps, but by taking financial risks, such as running various test phases at the same time. Developers must generally ensure that the previous step was successful before proceeding to the next step. From beginning to end, the metaphor of food connects people with science. The initial virus culture is like a sour noodle starter; the traditional process of obtaining laboratory results and then applying for funding for the next step is like having to go to the store separately for each ingredient in a barbecue dinner. Ultimately, the biggest mystery is how the author found time to write the middle part of the book.

Although the chronology of events and science can sometimes become confusing-readers have already explained in detail the “replication-deficient recombinant simian adenovirus vector vaccine” before understanding the working principle of the vaccine-Green and Gilbert explained everything clearly, From molecular biology to clinical trial design. There is even a handy appendix that lists the components of the vaccine and the effects of each component.

If that was enough to calm the worries Green heard at the campsite, that would be great. Sadly, it is hard to imagine that even her down-to-earth charm can compete with the flood of anti-vaccine propaganda flooding social media. Even so, it is worth a try.