On August 5, 2021, the United States made a major adjustment in its response to COVID-19: it plans to supplement the COVID-19 vaccine for high-risk groups.

Dr. Fauci, Chief Scientist of the White House and a top infectious disease expert in the United States, said:  “If there’s going to be a third booster, which might likely happen, would be among first the vulnerable”

This is a very important change, because on July 8 when Pfizer claimed that the mRNA vaccine needed a third injection six months later, the US FDA and CDC immediately issued a statement: No need.

For this huge change, major US media have made extensive reports. Dr. Fauci explained:”It’s a dynamic situation. You’ve got to look at the data.”

This dynamic change is obviously due to the continuous decrease in the protective power of Pfizer vaccine and the rampant delta mutant strain.

And what made Dr. Fauci’s final determination is that another mRNA company Moderna in the United States today also announced the results of its vaccine replanting research.

On August 5, 2021, Moderna Corporation of the United States released its second-quarter financial report.

In addition to the changes in the protection of mRNA vaccines against COVID-19 mutant infections, which we can’t wait to know, Moderna has also demonstrated the astronomical journey of mRNA vaccines.

The most striking thing is the serum neutralization activity data after the third dose of mRNA-1273 (50ug, half the dose).

The results showed that after the third dose (half dose), neutralizing antibodies increased from 198 to 4,588 against wild type, and from 30 to 1,268 against Delta.

It should be noted that this set of data actually shows two details:

1) After 6 months of inoculation of the second dose of Moderna’s mRNA vaccine, the neutralizing antibody was significantly reduced, and the neutralizing titer for wild-type decreased from 1210 at 1 month to 198; for the neutralizing drop of the Delta mutant strain The degree is only 30! 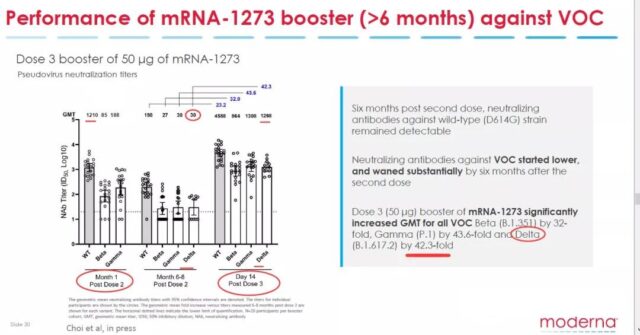 Therefore, the explanation given by Moderna is: 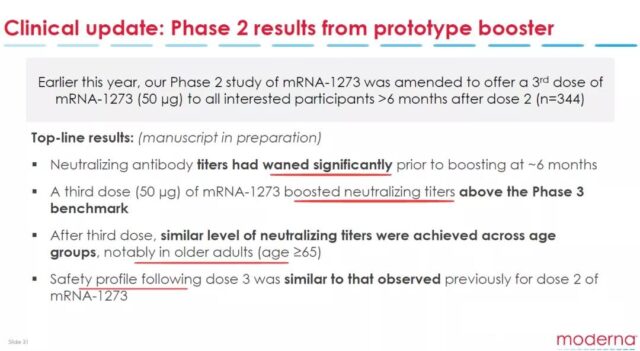 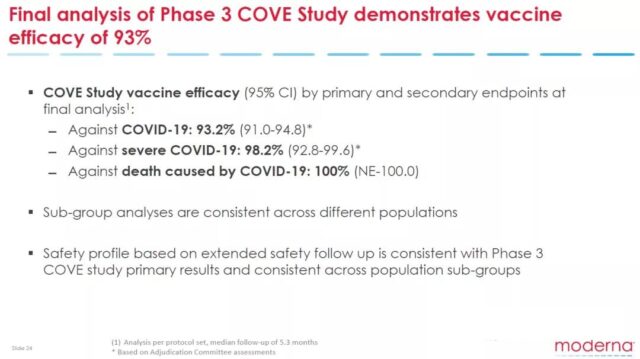 In further data, it is shown that as the vaccination time is extended, the protection of Moderna vaccine against COVID-19 is not significantly reduced.
But this set of values ​​obviously does not have data for the Delta mutant strain. 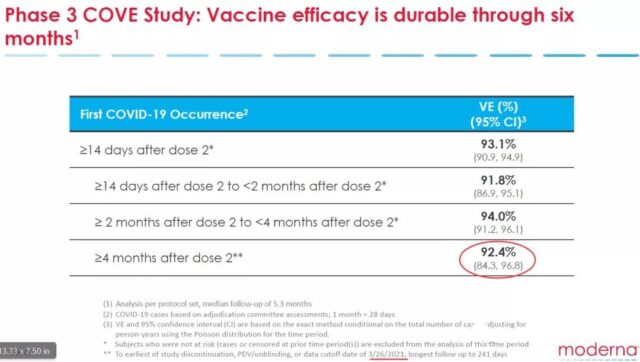 The second is the rapid growth in sales of Moderna vaccines.

In the second quarter, Moderna vaccine sales revenue reached 4.2 billion U.S. dollars (compared to Pfizer: 7.8 billion U.S. dollars), of which 2.1 billion (50%) were sales outside the United States. This sales is also 2.5 times that of the first quarter. 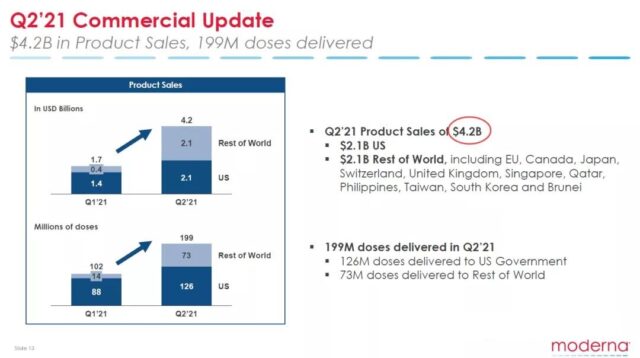 Like Pfizer, Moderna’s success in the development of COVID-19 mRNA vaccines has not only brought huge sales revenue, but also enabled Moderna to carry out more new research and development projects while improving its technology.

The first breakthrough in the prevention of COVID-19, and the advantages of being far ahead of other vaccines, enabled scientists not only to confirm the clinical effect of mRNA vaccines for the first time, but also to expand the application prospects of mRNA vaccines like a sea of ​​stars. 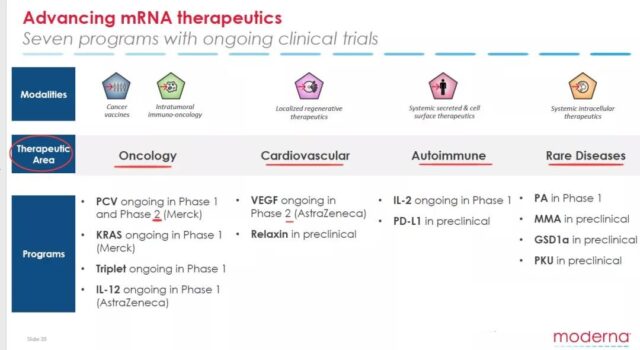 And Moderna’s R&D pipeline shows the extent of its progress. The COVID-19 has been successfully marketed, the prevention of other viruses is already in Phase 3 clinical trials, and the cancer vaccine has already entered Phase 2 clinical trials.

However, most of the other projects are still in phase 1 or pre-clinical stage. 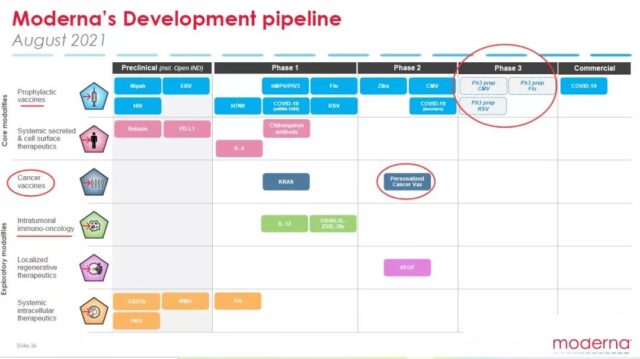 Going back to Dr. Fauci’s change of attitude towards the third injection of vaccine, he can only say that “the situation is better than people.”

Under the attack of the Delta mutant strain, high-risk groups such as the elderly are facing a more dangerous situation. The UK and Germany have already planned to start the third injection of high-risk groups in September.

Combined with Moderna’s quarterly report, you can see:

In the interpretation of Pfizer’s quarterly report, we proposed that “it is also necessary for the United States to refill vaccines.”

2. Moderna’s mRNA vaccine is far ahead of COVID-19 vaccines

It can induce 4 times the neutralizing antibody in the serum of the recovered patient and provide the reason for the ultra-high protection.
The first group’s test results have all been reported. Behind the success and failure of the COVID-19 vaccine, it is embarrassing.

Because of the continuous emergence of mutant strains, most other vaccines are difficult to provide effective protection against infection, but they are still sufficient in preventing serious illness and death. In this case, the demand for mRNA vaccines from Pfizer and Moderna has increased significantly.

3. The long-term clinical application of mRNA vaccines is worth looking forward to

American researchers are using mRNA vaccine technology to fight the COVID-19 coronavirus to develop vaccines against other diseases including influenza and AIDS.

In addition to Pfizer/BioNTech and Moderna, there are 4 other US companies that are developing new mRNA vaccines and treatments:

3) Translate Bio is experimenting with a method to treat cystic fibrosis. (Just acquired by Sanofi for US$3.2 billion). So in the future it will be Sanofi.

4) Arcturus Therapeutics company is developing mRNA vaccines to prevent influenza and COVID-19, as well as treatments for cystic fibrosis and liver disease.

The two mRNAs in Germany are also catching up

1) BioNTech is a partner of Pfizer. All these ambitious plans of Pfizer are based on the cooperation with BioNTech.

2), CureVac company. It is the company that was spotted by former US President Trump and wanted to buy in early 2020, and was later blocked by the European Union. CureVac was favored by Iron Man Elon Musk. It sounds shocking to be able to print clinically needed proteins at will, but when I think about Elon’s project, I believe it.

It should be noted that the development of CureVac’s COVID-19 mRNA vaccine failed miserably. This is in our expectation, because the neutralizing antibodies induced in the phase I clinical trial of CureVac are similar to those of the recovered patients, so it is naturally inadequate for the Delta mutant strain.

We have analyzed the reasons for the failure of the CureVac vaccine. CureVac uses unmodified mRNA vectors, and we often say that Pfizer and Moderna have extended 3’Poly(A) and modified mRNA with m1Ψ; these modifications not only determine the stability of the mRNA vector, And determine its DC tropism and induced signaling pathways.

If the mRNA vector itself activates a strong TLR/RIG-I signal, its role is not a vector but an adjuvant, so a large number of vectors may be eliminated by the cell before expression.