JAMA Sub-Journal: Only smoking e-cigarettes once will increase the risk of multiple diseases

Only smoking e-cigarettes once will increase risks of multiple diseases.  E-cigarettes are devices that deliver nicotine, flavorings and other chemicals in the form of steam instead of smoke, and are regarded by many as a safer alternative than ordinary cigarettes. However, more and more studies have confirmed that e-cigarettes are not safe. E-cigarettes can cause many harmful changes and affect long-term health.

The study shows that even if a healthy young person who has never smoked before, smoking an e-cigarette for only 30 minutes is enough to cause significant oxidative stress in the body, leading to an imbalance of antioxidants and free radicals. Over time, this This imbalance will promote cardiovascular disease, lung disease and nervous system disease, as well as the risk of cancer.

The risks that tobacco and e-cigarettes pose to the health of ordinary smokers have been fully documented, but a new study from UCLA shows how quickly e-cigarettes affect their cells even for healthy young non-smokers .

Free radicals are intermediate metabolites of various biochemical reactions in human life activities. They have high chemical activity and are an effective defense system of the body. However, free radicals can also cause damage to cells. The human body uses antioxidants to fight free radicals to achieve both The dynamic balance between. This balance is broken, it will lead to cellular oxidative stress, which in turn promotes cardiovascular disease, lung disease and nervous system disease, as well as the risk of cancer.

The researchers divided 32 male and female participants between the ages of 21-33 into three groups: 11 non-smokers, 9 regular smokers and 12 regular e-cigarettes. Then they collected each person’s immune cells half an hour before and half an hour after they smoked the e-cigarette to measure and compare the changes in oxidative stress between the groups. 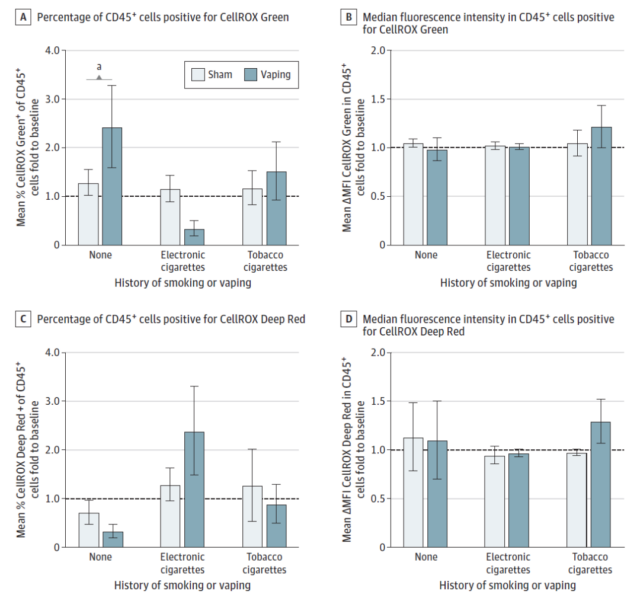 The researchers particularly emphasized that the serious impact of e-cigarette smoking on healthy young people is surprising, and the prevalence of e-cigarettes continues to increase, especially among adolescents and young people. According to a 2020 survey, nearly one-third of high school students in the United States have used e-cigarettes in the past month.

The research team also stated that it is not clear what component in the e-cigarette caused the dramatic change in oxidative stress levels, and this issue needs to be further explored in follow-up studies.