Recovered COVID-19 patients are more likely to be infected again?

On August 6,  CDC of United States again announced the results of a guiding study-if recovered patients are not vaccinated, the chance of re-infection is 2.34 (95% confidence interval: 1.58-3.47) times higher than that of vaccinated recovered patients. .

The opening of this report clearly mentions that many studies have shown that the effects of antibodies in the body of recovered patients who have produced antibodies through natural infection with the virus are not as effective as some vaccines. Indeed, recent studies conducted by New York University on various variant strains and various vaccines have also illustrated this problem. In the New York University study, the neutralizing antibody in serum of recovered patients was lower than that of the two mRNA vaccines, but higher than that of the two mRNA vaccines. The Johnson & Johnson adenovirus vaccine shows that the difference exists objectively.

Unlike most studies that use neutralizing antibody titer measurement methods to evaluate effectiveness, this report published by the US CDC directly evaluated the effectiveness of antibodies in recovered patients from the outcome of infection. Vaccination.

Sampling data are from May to June this year, the infection strain is not clear

The samples studied in this US CDC report are mainly from local residents in Kentucky, USA. The sampling window is from May 1 to June 30, 2021. The report states that the sampling period is to consider the vaccination situation at that time to be more in line with the research needs.

It should be noted that the popularity of Delta in the United States during this time period is not as high as it is now. The study did not clarify the type and situation of local virus strains circulating in the sampling time window.

The study adopted a case-control method, selected cases that had been infected in 2020, and then divided the samples into two groups for comparison according to factors such as gender, age, and infection cycle-one group was set on May 1, 2021. The new coronavirus re-infection occurred from June 30 to June 30, and the other group was not infected. The baseline data of the two sets of samples are as follows. 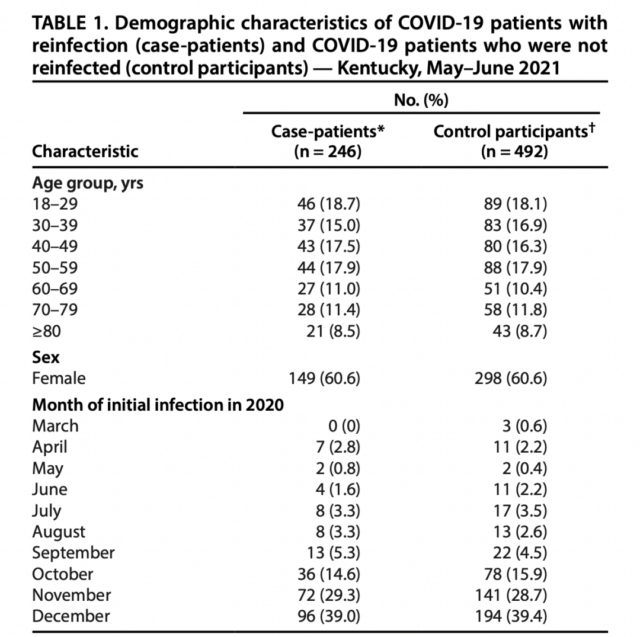 It can be seen that in terms of age distribution and sex ratio distribution, the two groups are almost completely contrasted. A total of 246 cases of re-infection were included, while a total of 492 recovered patients who did not re-infected were included. There was little difference in the proportion of elderly people over 60 years old on both sides, and women accounted for 60.6%.

In terms of first infections, the distribution time of infections between the two groups last year was not much different. Most of the first infections came from November and December last year, accounting for more than half of the total.

All in all, except for the unclear strains of the first infection and the second infection, age, gender and infection time are almost completely corresponding. Other baseline data on underlying diseases, BMI, and physical exercise are not recorded in this report.

The reinfection rate of recovered patients who are not vaccinated is 2.34 times higher than that of vaccinated patients

After analysis and calculation, the difference in reinfection between the vaccinated and non-vaccinated recovered patients in the interval from May 1 to June 30, 2021 is as follows:

In any case, the final conclusion of the article suggests that it is best for recovered patients to be vaccinated to reduce the chance of reinfection.

What does it mean to reinfect a recovered patient?

Relevant original part of the report

Many studies in the past have different opinions about the maintenance time of antibodies in recovered patients. Most of the opinions focus on 6 months, and some studies believe that it can last for more than a year or even a lifetime. Part of the research based on the 6-month argument is mostly related to the interval between the second wave of the epidemic and the first wave of the epidemic in India, Brazil, Peru and other regions, as well as some cases of repeated infections.

This report adopted a more conservative figure-90 days, or 3 months, which is a direct discount to the more popular “6 months.”

This reference coefficient may be related to the emergence of mutant strains. The report also admits that some studies have observed that the serum of recovered patients infected with wild-type can provide better resistance to mutant strains, especially those with immune escape ability. Weak, or unable to provide continuous protection.

At the same time, some time ago, Cell released a study showing that the cross-immunity efficacy of antibodies produced by mutant strains has been significantly reduced. In other words, for people who are infected with Beta, the protective effect of their antibodies on Delta will be reduced-although the two variants have immune escape ability, because of the difference in antigen specificity, the antibodies have appeared to be more serious. Mutual recognition”. 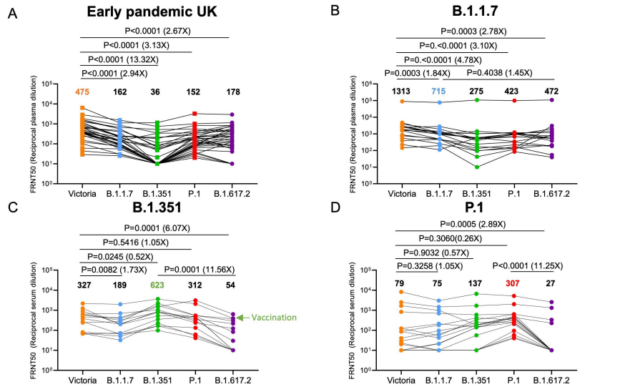 As shown in the figure above, the cross-immunity data given by the Cell study, in figure C, the serum of recovered patients not infected with Beta (B.1.351), its neutralizing antibody titer for Beta is 623, but it is 54 for Delta. A similar problem also occurs in Figure D, P.1, which also has the ability to escape immunity. In addition, the sera of recovered patients from B.1.351 and P.1 also showed the problem of cross-immunity decline.

At present, the serum treatment plan for rehabilitation patients, which has been hotly discussed in the early stage, has been basically no one cares about. Many hypotheses or initial studies, like serum therapy for recovered patients, are constantly being breached by changing epidemics. For example, in the early days, some experts claimed that recovered patients would not have secondary infections, but now there are frequent summary reports of secondary infections. The same claims The other methods of 100% how or whatever are not really 100% effective.