What reason caused some people infected with COVID-19 times?

What reason caused some people infected with COVID-19 times?  The Delta mutant strain of the new coronavirus that first appeared in India has attracted widespread attention in the world.

A recent study found that the neutralizing effect of the convalescent serum and vaccine on the Delta variant strain was reduced, and the results of the study provided a certain degree of explanation for the reason for the unsatisfactory immune effect.

At present, the two variants found in India are mainly Kappa and Delta, both of which belong to the B.1.617 strain. They are currently found in most parts of the world and become the main epidemic strains of COVID-19.

Obviously, the neutralizing effect of the infected person’s serum on the Kappa mutant strain is not as good as that of the standard strain.

In the serum of previously infected persons, the neutralizing activity FRNT50 for the standard strain was 475, and for the Delta variant strain (B.1.617.2) it was 178.

The neutralizing activity FRNT50 of patients infected with Alpha mutant strains was 715 and 472 for Delta mutants. 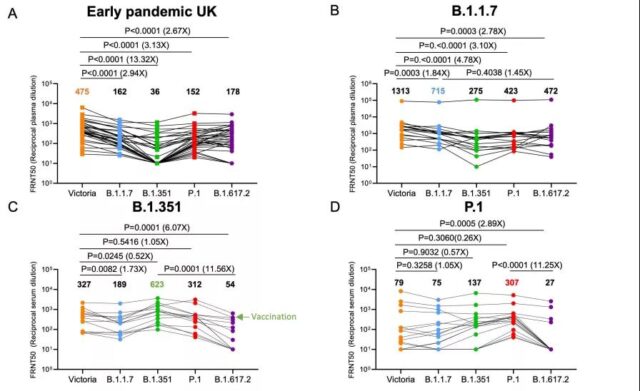 Therefore, individuals who have been infected with Beta and Gamma variants, due to the lack of cross-neutralization of antibodies, are still at risk of re-infection with Delta variants.

Due to the continuous mutations of the new coronavirus, the genetic sequencing of the virus is gradually established all over the world. However, the progress of genome testing in many regions is slow and cannot keep up with the speed of infection. Therefore, the diversity of the new coronavirus mutant strains is likely to be underestimated, and further Mutation and spread are likely to continue to occur.

Variant strains are extremely infectious and people at higher risk of disease, such as the elderly and patients with comorbidities, should be vaccinated with at least one shot. Although the antibody response is low or non-existent, a single dose of the vaccine may still provide protection effect. Of course, if conditions permit, two doses of immunization are better.

How to prevent repeated infections?

At present, people are also considering the use of enhanced vaccines to prevent further mutations of mutant strains such as Beta. Future vaccines are likely to require protection from the components of a variety of mutant strains, including at least the basic serum complexes of standard strains or Alpha variant.

In summary, this study provides a possible explanation for the phenomenon of repeated infections caused by the Delta mutant: not all antibodies can neutralize it. As the new coronavirus continues to mutate, it is likely that it will continue to mutate in the future. There are more such differences in effectiveness.