All condoms/contraceptives are not required: antibodies found in infertile women can effectively prevent contraception after modification and avoid the side effects of hormonal contraceptives

Antibodies in infertile women can prevent contraception after modification.   Modern science provides women with two basic options for contraception: blocking mechanisms such as condoms or intrauterine devices, and injection or oral hormonal contraceptives.

Although these two methods of contraception are cheap and effective, nearly half of pregnancies are unintended pregnancies, which imposes a huge cost burden on the healthcare system and is also detrimental to women’s physical and mental health.

Previous studies have found that some women cannot get pregnant because they have antibodies against sperm. These antibodies bind to the sperm and cause the sperm to lose their vitality. So can this antibody be used to develop a third method of contraception?

On August 11, 2021, researchers from the University of North Carolina at Chapel Hill published a research paper titled: Engineering sperm-binding IgG antibodies for the development of an effective nonhormonal female contraception in Science Translational Medicine.

The research team extracted antibodies against sperm CD52g antigen from female immune-infertile volunteers and engineered them to capture 99.9% of human sperm. This research brings a third method of contraception besides condoms and contraceptives, and human clinical trials have already begun.

The research team obtained a monoclonal antibody against sperm from female volunteers with immune infertility. This antibody can target the CD52g antigen present on the surface of almost all human sperm, and then bind to the sperm and limit the movement of the sperm. Effective strategies for hormonal contraception.

Inspired by the stronger agglutination ability of multivalent immunoglobulins and the ease and stability of IgG bioprocessing, the research team further designed the obtained antibodies against sperm and designed a set of sperm-binding IgG, which contains 6 (FIF), 8 (FIFF), 10 (FFIFF) antigen binding fragments (Fab).

The research team then injected plasmids containing these antibody genes into human embryonic cells, resulting in the growth of new IgG cells containing engineered components. Next, the research team tested the ability of IgG cells to attract and bind sperm in a petri dish, and found that they were at least 10 times better at capturing sperm than the original antibody extracted from female volunteers, and the binding speed was faster. 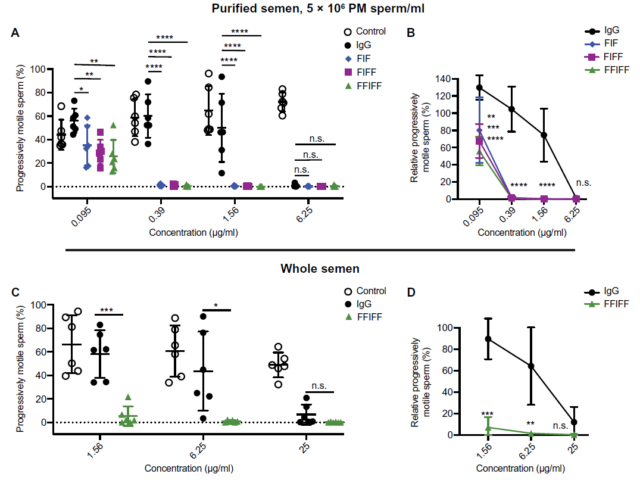 Next, the research team verified the effect of IgG antibodies in the body, injected a solution containing IgG antibodies into the vaginas of several sheep, and then simulated mating and injected human sperm. After two minutes, sperm were collected from the vagina of the sheep and the motility of these sperm was tested.

The test results showed that, compared with the control group, 10 antigen-binding fragments (Fab) IgG antibodies, even at a low dose of 33.3μg, captured and bound 99.9% of sperm.

The research team also pointed out that more work needs to be done to determine whether this technology can become the third method of contraception for women in the future. This study also has certain limitations, for example, it did not directly prove the effect of preventing pregnancy. In addition, the study used sheep because of such experiments on chimpanzees in the United States. Only human and chimpanzee sperm have CD52g antigen.

At present, the research team has started a human clinical trial to test the antibody’s ability to capture human sperm in women who have undergone surgical sterilization and are not at risk of pregnancy. Clinical trial number: NCT04731818.